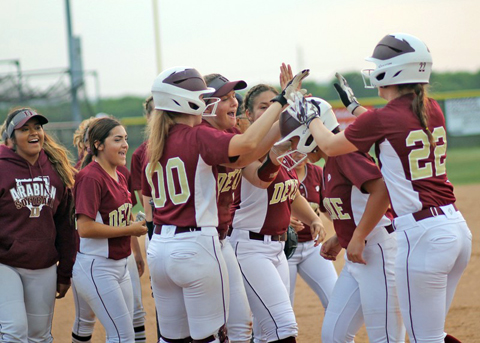 Crystal City earned the first runs of the game on Friday night, but the Varsity Arabians earned the win at 14-4. The Arabians’ were able to earn 6 singles, 4 doubles, and 2 home runs against the Javelina pitcher. Mackenzie McClellan threw 56 strikes in 91 pitches and only had 6 hits against her.
The Javelinas opened with two runs in the top of the first and Devine answered with three runs of their own. With one out, Jeanette Rios on third, and Megan Runyan on first, Jesse Ramirez hit a double and Rios scored.
Allison Taylor hit a sacrifice fly ball to center and Runyan took advantage of that to cross home. Halle Hagdorn was next up to bat, hitting a single to center and Ramirez scored to bring the Arabians up 3-2.
Bottom of the second, one out, Julie Ortiz on first, and Dawn Morris on second, Rios ground out and Morris scored. Ortiz on third and then she scored when Runyan hit a pop up and reached first after an error by their short. Home run from Ramirez brings home Runyan and herself for a 7-2 lead.
Bottom of the third, Hagdorn hits a line drive to center and makes it a home run! Two outs, bases loaded with Isabella Gutierrez, Mackenzie Schneider, and Rios, Runyan hit a pop fly and Gutierrez and Schneider score.
Bottom of the fifth, Ortiz walked, Rios hit by pitch, Runyan singled and Ortiz and Rios scored. Ramirez doubled and Runyan scored. Taylor hit a double to left and Ramirez scored the last Devine run of the game. The game was called at 14-4.
Ortiz 2 runs. Rios 2 runs, 1 RBI. Runyan 3 runs, 2 hits, 2 RBIs. Ramirez 3 runs, 3 hits, 4 RBIs. Taylor 1 hit, 2 RBIs. Hagdorn 1 run, 2 hits, 2 RBIs. Gutierrez 1 run, 1 hit. McClellan 2 hits. Schneider 1 run, 1 hit. Morris 1 run.
Devine is now 6-1 in district and 14-14 overall.
They played their last district game last night, April 16 in Pearsall.
By Dicy Chambers
Sports Writer