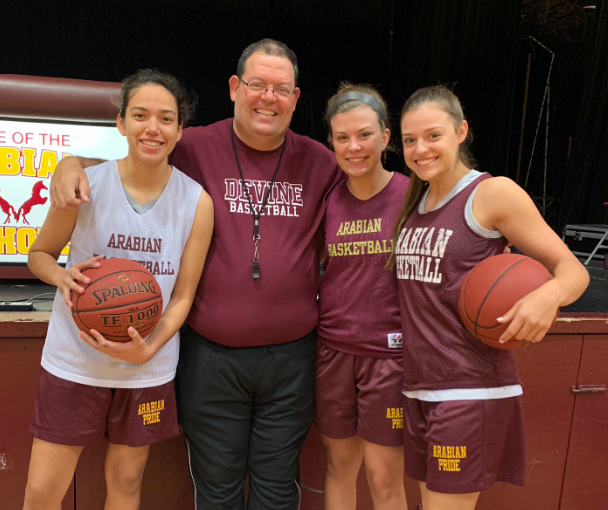 With the return of the fall weather comes Arabian Basketball season!
Practice has started and with the first scrimmage this Saturday, October 27th in Uvalde, the Arabians are getting ready for a winning season. Seven players are returning from last season’s undefeated district varsity team. Coach Jim Sessions is excited to build a team that will improve upon last year’s 27-6 overall record. Gary Schmidt will assist Coach Sessions on varsity, Hannah Thompson will lead the JV, and Mark Mangold will coach the 13 girls that came out for the freshman team.
With Hondo back in the district, the Arabians will have to work hard to repeat their district sweep. Crystal City and Pearsall have many returning players and Carrizo Springs has a new head coach.
“I think we will be very competitive this season. We have a good amount of returning players and we will have some new faces as well. I think we will be athletic and be able to press a little more than in past years…we will not have much size inside this season but we should be able to counter that with athleticism and quickness. I am very excited about the upcoming season,” said Coach Sessions.
When he was asked about what he hopes to improve upon from last year, Sessions said he would like to repeat another great season. “This is a new year and a new team, but it would be great to have that success. We were able to win district and get to the playoffs last season, but we had an early exit. I would really like to replicate that season in a way, but with more success in the playoffs.”
With volleyball, cross country, and band still in full swing, the coaches will not have all of their players in the upcoming scrimmage but that will not stop them from playing hard and putting everything they have into getting the win.
The Arabians have a full season ahead of them with six tournaments, nine pre-district games, and eight district games. The Arabians first home game will be November 19th, the Devine Varsity Tournament is December 6-8, and district starts January 4th against Hondo. The full schedule is on the high school’s website. LET’S GO ARABIANS!
By Dicy Chambers
Sports Writer