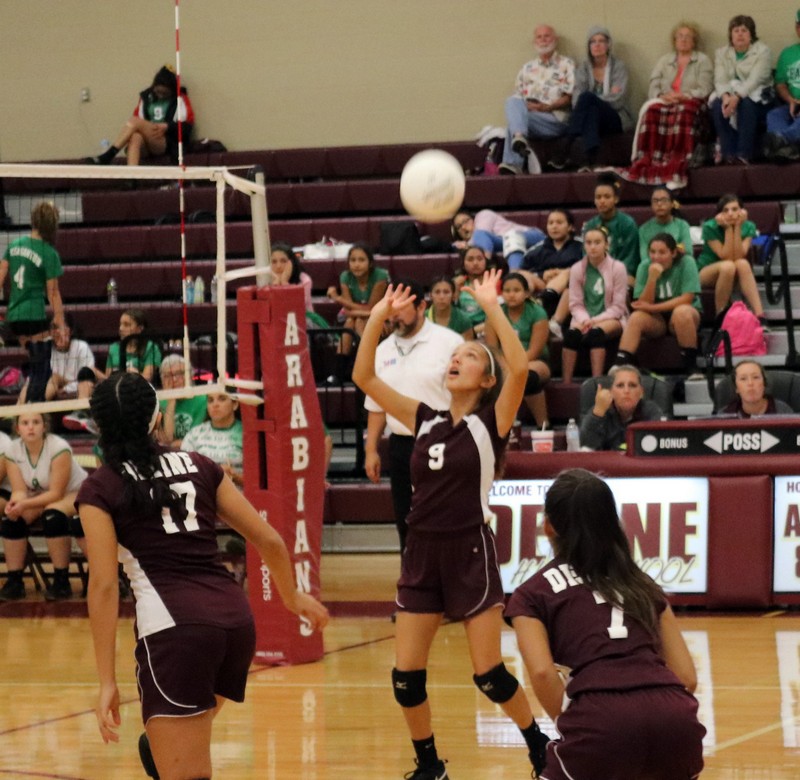 Click here for photos of the 8th grade Fillys!

In their home tournament, the 8th grade Gold Fillys won both of their games to earn first place. Facing Natalia in their first match, they won 25-18 and 27-25. Their second match went just as well with a win over Lytle at 25-16 and 25-19. Every girl played to their full potential and never let a mistake rattle them.
“They have worked so hard to improve, and they are seeing the reward. They are communicating and playing well as a team. I am so proud of them. They deserve this tournament win.” Coach Julie Oropeza.
Poteet
The Poteet Lady Aggies traveled to Devine and faced a hard loss to the 8th grade Gold Fillys. The Fillys’ improved serving game was key to this home win. Becca Mares served 8 points with 3 aces and Andrea Rios served 9 points, three of which were aces. But serving alone does not win the game and Sierra Brown’s strong arm led to 3 hits and 2 kills. Joselyn Guarjardo and Angelina Rios each had a kill also. Passing and getting the ball where it needed to be plus talking to each other rounded out this impressive victory. The final scores were 25-9 and 25-17, making the Gold Fillys season record 4-2-1 and district 2-2-1.
“These girls have worked very hard and the success they are seeing is well deserved. I am very happy they are coming together as a group.” – Coach Julie Oropeza.
By Dicy Chambers
Sports Writer