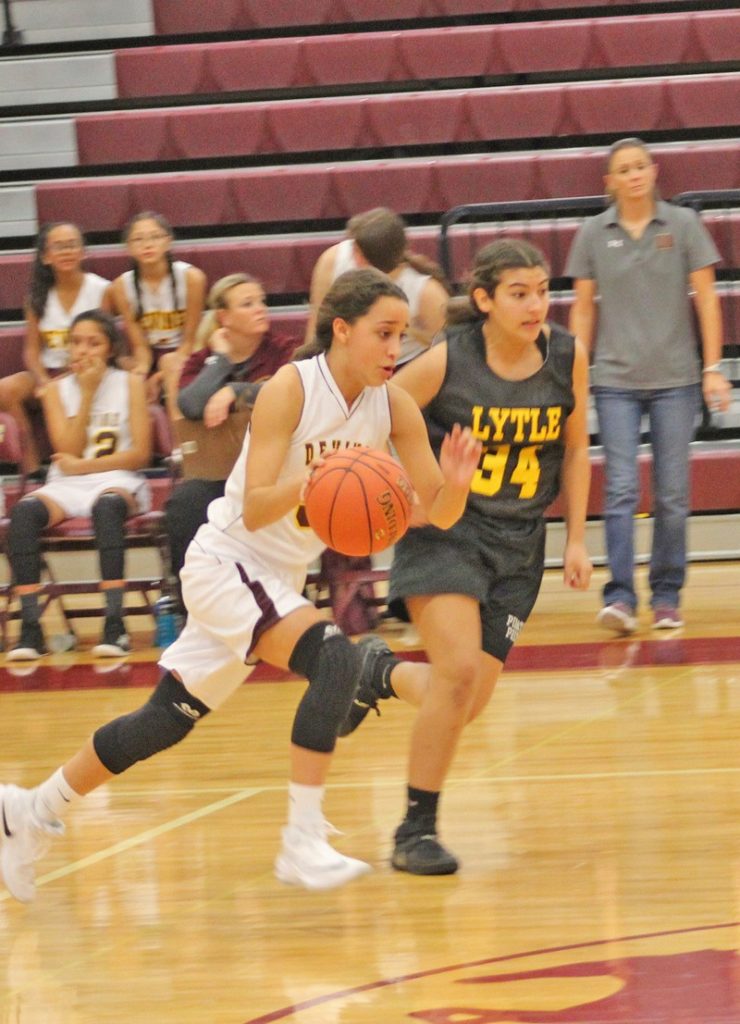 Saturday, the 8th Grade Maroon Fillys hosted their home tournament with Lytle, Hondo, and Pleasanton participating. The Fillys played Lytle in their first game and it was a fast paced, aggressive match. Winning 35-15, the Fillys ran their offense quickly and found holes in the Pirate defense and when they were on the other end of the court they played a tight defense, not allowing the Pirates to score.
Neenah Guerrero 2 assists and 6 steals, Baily Oropeza 5 points, 2 steals, and 3 rebounds. Angelina Rios 2 points, 1 rebound, and 1 steal. Rebecca Mares 2 rebounds and 3 steals. Andrea Rios 2 points and 1 steal. Cameron Hutton 4 points, 2 assists, 4 rebounds, and 2 steals. Koryann Arche 4 points, 5 rebounds, and 1 assist. Joselyn Guajardo 2 points, 1 assist, and 3 rebounds. Tatiana Gilbert 17 points, 9 rebounds, and 1 steal. Amber DuBose and Jordan Erxleben also played this game.
“This was out best game so far. We played as a total group with each member contributing. I was very happy with the result and am very pleased with the team’s progress,” said Coach Julie Oropeza.
In the championship match against Pleasanton, the Fillys played hard but could not keep up with the young Lady Eagles. Pleasanton took the lead early and the gap continued to grow with the Fillys unable to close it, however they never gave up and continued to fight for the ball.
“There was definitely no lack of heart by any of the players in this game. They played tough and tried to adjust through the game. Pleasanton was a tough opponent and they were better than us in this game. We will go back to work on the weak places in our game and hope to improve in the next few weeks,” state Coach Oropeza.
By Dicy Chambers
Sports Writer