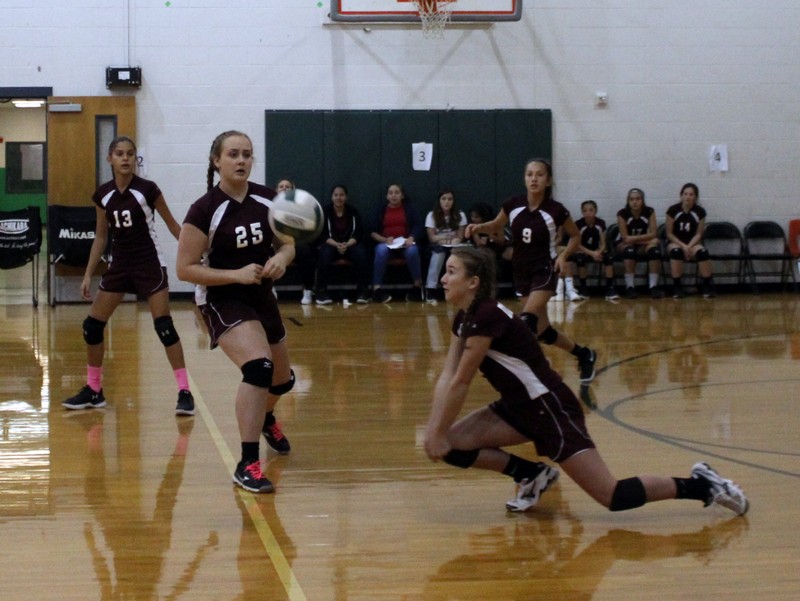 8th Gold Fillys
On Monday, October 22nd, the 8th Grade Gold Fillys faced the Pearsall Doggies and beat them 17-12 and 21-11. The teams serving was on fire this game and Becca Mares had 9 service points with 1 ace while Andrea Rios had 7 points with 3 aces. Abbie Dominguez had 2 aces and Angelina Rios had 1. Mares, Autumn Owen, Angelina Rios, Sierra Brown, and Ray Ann Pike each had one hit and Pike had 1 block.
“The girls really played as a team tonight. We served very well and made few mistakes. That was key to winning this game. Last game of the season for the Fillys is Monday evening in Devine when they face Carrizo Springs,” said Coach Julie Oropeza.
8th Maroon Fillys
Practice and determination are the keys to the 8th Grade Maroon Fillys win over Pearsall on October 22nd. “This was a great win for our team. We worked hard this past week to correct a few things and it showed tonight. We were much cleaner on defense and more aggressive and successful on offense. I am proud of the effort tonight.” Coach Julie Oropeza.
This was their 7th district win and serving played a huge part of this win. Amber DuBose collected 17 points while serving. Zoe Gonzales had 3 kills, Cameron Hutton and Koryann Arche each had 2, and Bailey Oropeza and Neenah Guerrero each had 1. DuBose had 5 assists and Kristina Moralez had 2. Seven digs were collected by 7 different Fillys. “The Fillys played strong defensively, which lead to playing more aggressive on offense,” said Coach Oropeza.
By Dicy Chambers
Sports Writer