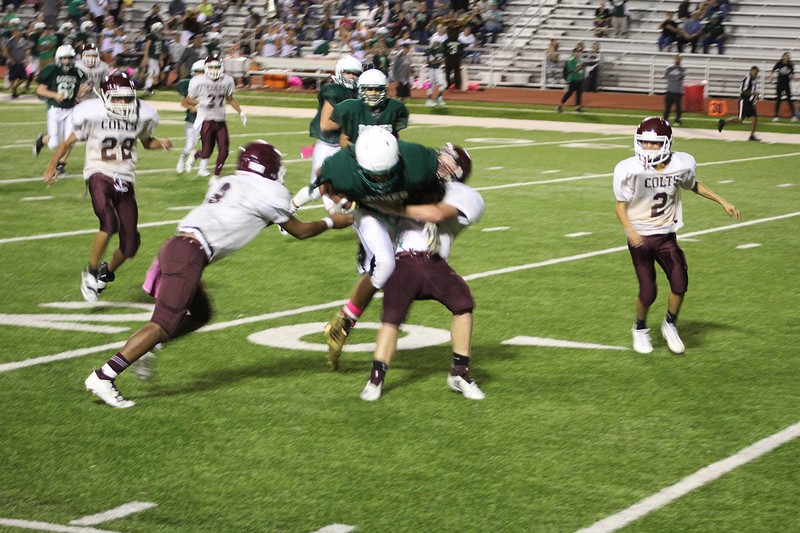 Gold Colts
It was a great night of hard-hitting football for the 8th grade Gold Colts when they played the Pearsall Doggies. With a final score of 20-0, the Colts have increased their season record to 3-1.
First to score was Gabriel Lopez on a 60 yard run. Jonathon Gelinas was able to sneak behind the Doggies’ secondary line and caught a 35-yard pass from Caden Hanson and then ran the ball in. Jack Schneider was stopped at the line during the two-point conversion. The half ended 14-0.
After pushing the ball down the field on five good runs, Johnny Lascano finished the last two yards of the drive with a touchdown. Hanson found Leah Rodriguez for the two point conversion. Final score was 20-0 for the Colts.
Tomorrow night the Colts travel to Poteet with games starting at 4:30.
Maroon Colts
Pearsall handed the 8th grade Maroon Colts their first loss of the season 28-6. The Doggies put up an impressive line that was hard to break. Pearsall did nothing on their first possession and when Devine go the ball they wasted no time in scoring. Jaieden Burford passed to Aiden Zapata for a 29-yard gain and with the ball on the 1-yard line, Zapata forced his way in and scored. This would be the Colts only score of the night and Pearsall would score 28 unanswered points.
“It was a tough loss to take, the Doggies ran the ball hard and they would hit you in the mouth. They showed up ready to play and were physical. I think this group was humbled. They were faced with some adversity and with that, we are hoping they grow and learn from it,“ said Coach Lon Cozby.
The 8th grade Maroon Colts are currently 4-1-1 and will face the Maroon Aggies Thursday night. Their final game will in Devine against Carrizo Springs on November 8th.
By Dicy Chambers
Sports Writer