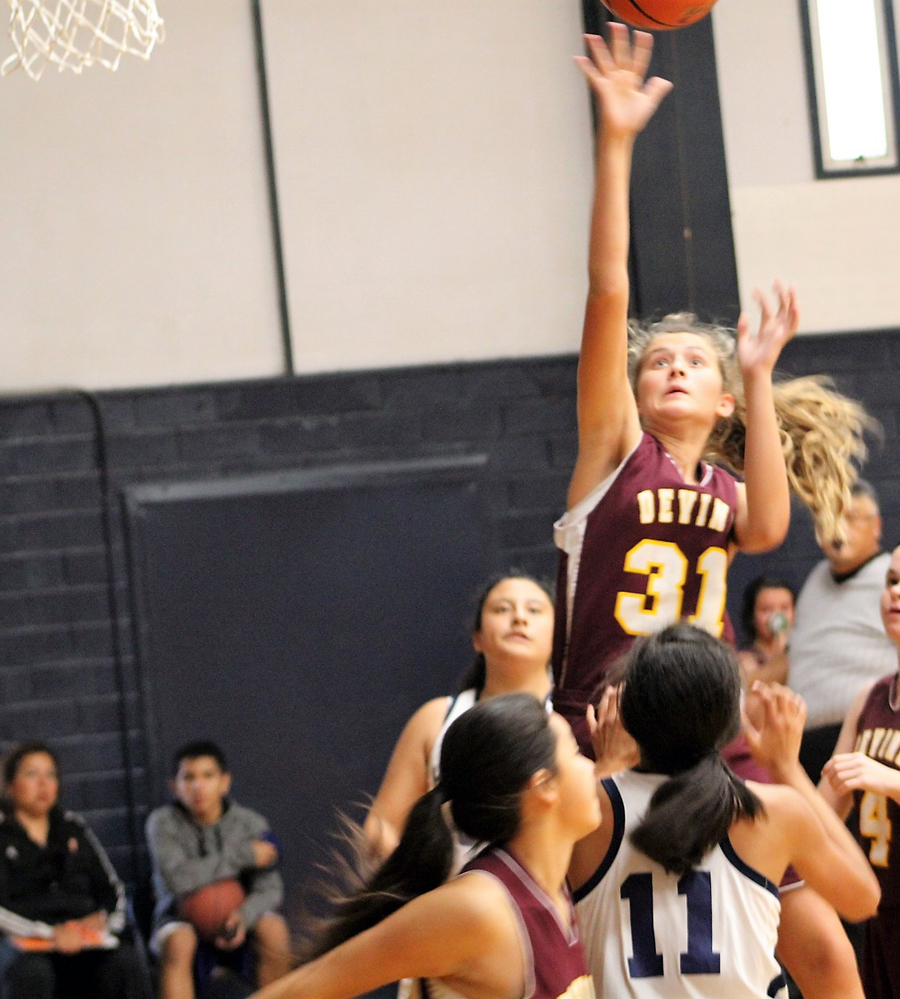 8th Grade Gold Fillys
December 14th the Gold 8th grade Fillys beat Carrizo Springs 25-10. Adjusting to the opponent’s zone defense and handling the ball well lead to the Gold Fillys victory. “I was proud of the adjustments they made during the game with their help defense that we have been focusing on during practice” said Coach Khera Vay
Chasity Reyes scored 10 points, Daisy Mendoza, Carmelina Bernal, Emily Cruz, Leilani Lescano, Makayla Perez, Marianna Hutton, Kylie Rodriguez each had 2, and Darian Alvarez had a free throw.
vs. Pleasanton
Monday night, the 8th grade Gold Fillys played Pleasanton at home and won 39-17. Playing a smart defensive game, the Fillys are improving each week and will not play again until after the New Year.
“I was very proud of the team effort on the defensive end. Great defense leads to great offense and the Fillys converted many steals into points but also converted on some specialty plays as well,” said Coach Khera Vay.
Brooklynn Crossland scored 6 points, Kylie Rodriguez and Emily Cruz each scored 4, Serena Macias 2, Chasity Reyes 2, and Darian Alverez 2 points.
8th Grade Maroon
Adjusting to the defense and running a new offense, the 8th grade Maroon Fillys beat Carrizo Springs 34-16. Even with the basket not allowing shots and free throws in, the Fillys adjusted and kept the pressure up. “I’m seeing the girls transform during practices and games and I’m looking forward to the rest of the season.”-Coach Khera Vay
Scoring 11 points was Macey Hein, Yessika Garza 8, Kendall Marek 4, Kelli Geyer, Kadence Yates, Analisa Pompa, Bri Torres and Cece Martinez each had 2, and Lacey Hook, Sam Lescao and Mayah Brogdon each had a free throw.
vs. Eagles
It was a tough match up for the Maroon Fillys when they faced Pleasanton Monday night. Tied at 23 at the half, the Fillys came out stronger in the second half. “After some half time adjustments, the girls came out and put some extra pressure on the post by doubling down, jumped in and out of a press and ran the 4 out offense well to get some easy baskets of cuts and dribble penetrations” said Coach Khera Vay. At the end of the 3rd, Devine led 39-29 and Pleasanton was not able to score a point in the 4th. The final score was 52-29.
Macey Hein led with 24 points, Analisa Pompa 9, Lacey Shook 8, Kadence Yates 4, Leilana Lascano 2, Mayah Brogdon 2, Yessika Garza 2, and Cece Martinez had 1 point.
By Dicy Chambers
Sports Writer