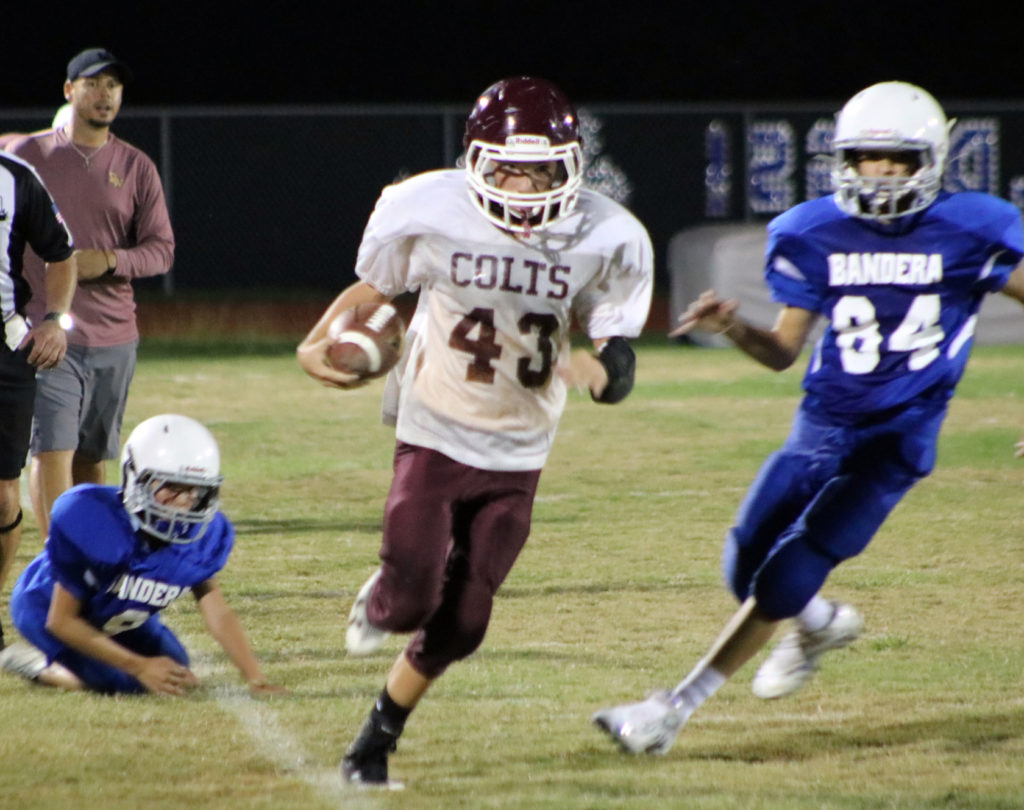 The 8th Grade Colts swept Bandera on Oct. 4
B Team Colts
The 8th Grade B Team Colts beat the Bulldogs 6-0.
In the 2nd quarter, Iggy Cisneros had a 37 yd run to score the first touchdown but Angel Espinosa was stopped short on the 2 pt conversion.  This put the Colts up 6-0.
“Iggy Cisneros scored the lone touchdown in the 1st half to give the colts the win. We moved the ball very well with some great passes from Robert Russell. He was able to find Hadyn Brummage and Charles Waddey multiple times throughout the game. This is what opened up the running game. Wayne Sloan had a great 15 yd run in the 4th quarter that almost broke for a touchdown,” state Coach Lon Cozby.
“Our Defense had a goal line stand to keep Bandera out of the end zone. Jacob Delaney, Rudy Rodriguez and Christian Rendon played tough up front along with linebacker Brummage. Terry Cristanelli had his best game with multiple solo tackles,” added Coach Cozby.
A Team Colts
The 8th Grade A Team Colts beat the  Bulldogs 14-6.
In the 1st quarter Brady Hackebeil had a 70 yd run, out running the entire defense, however Xavier Contreras 2 pt attempt no good putting the Colts up 6-0.
In the 2nd quarter, after a pass interference call, and on the last play of the half, Payton Carr caught a 30 yd pass from Hackebeil, and Hackebeil added the 2 pt attempt making the score 14-0.
In the 3rd quarter Bandera put together a nice drive to start the 2nd half and was able to score on a run up the middle. We were able to stop the 2 pt try with a gang tackle from Zack Rico, Robert Rosas, and Zack Nowicki.
The rest of the game was back and forth.
“Bandera was a good team, the best we played all year. We were able to put the game away when Brady picked up a 1st down with under two minutes to play on a 4th down quarterback keep. We then ran out the clock for the victory,” stated Coach Lon Cozby.