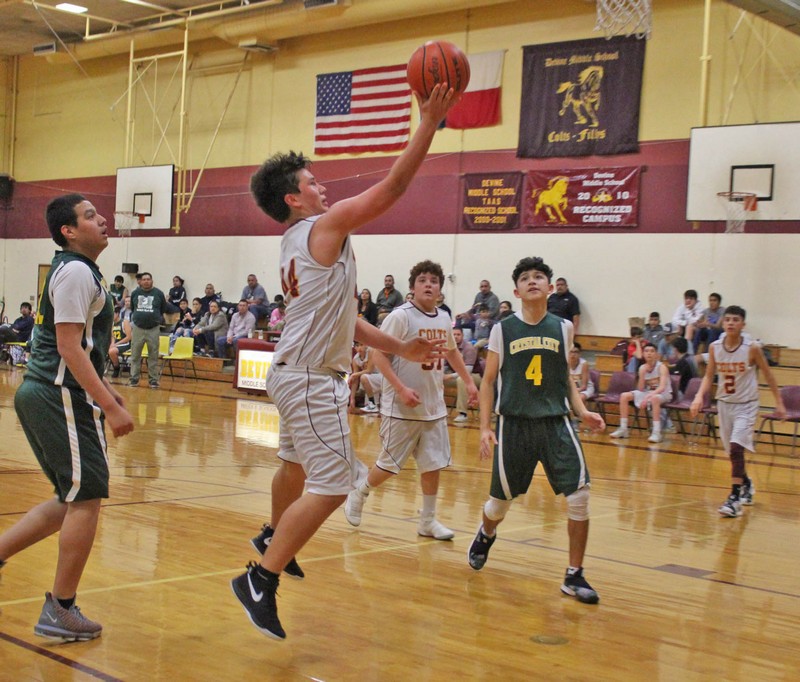 8th Grade Gold
In their first game back from the holiday break, the 8th Grade Gold Colts beat Crystal City 35-28. It was an aggressive game with each team fighting for every loss ball and rebound.
“Rylan Mata had a great game on defense getting all his points on steals and fast breaks. Noah Macias had his highest point total of the season. Lokey Aguero and Enrique Midobuche both played great on defense and had a lot of key rebounds throughout the game,” said Coach Lon Cozby.
Noah Macias and Rylan Mata each had 10 points, Lokey Aguero and Enrique Midobuche 4 each, Jack Schneider, Juan Billobos, and Samuel Mills 2 each, and Jacob Antu 1.
The Colts will face Hondo Thursday night and then host their home tournament this Saturday.
8th Grade Maroon
The 8th Grade Maroon Colts were unprepared for the fight they would get from Crystal City last Thursday night. It was their first game since coming back from the holiday break and the Colts let Crystal City get too big a lead to come back from.
“Crystal City is a tough opponent. We came out flat; you could tell we were coming off a long break. Crystal came out on fire. They made almost everything in the 1st half. We had some bright spots but just could not seem to catch a break. Jathon Razo played an awesome game, he was everywhere and played with a lot of intensity,” said Coach Cozby.
Jaieden Burford 15 points, Jathon Razo 8, Aiden Zapata 4, and Nate Ramirez, Kaiveri Alvarez, Logan Camarillo, and Joaquin Philippi 2 each.
They will play in Hondo Thursday night and then host their home tournament this Saturday.