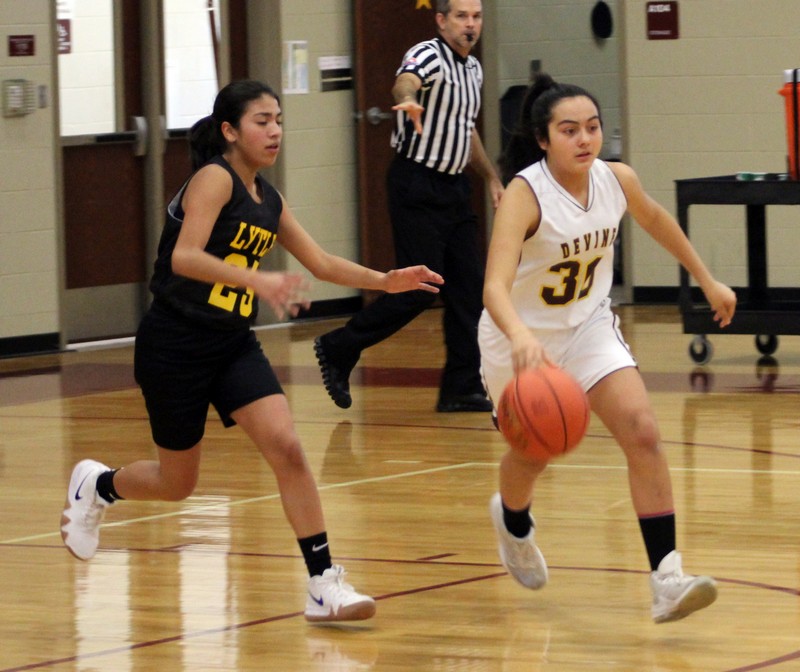 8th Grade Maroon Fillys
In the second meeting of the season between Crystal City and Devine, the 8th Grade Maroon Fillys knew they would have a tough game ahead of them. Having lost the first game 32-16, the pressure was on to have a better game the second time, but when the game got off to a quick start, the Fillys had a hard time keeping up with the tough team. The Fillys never gave up and held their composure until the end. The final score was 22-45.
“Before the Christmas break, I felt great about the progress our team had made. We were getting better and better, working as a team and winning our way through district play. It is tough to come back and head straight into a game with Crystal City, knowing how though they are. We will bounce back and continue to improve with three district games to go, we have a lot to look forward to!” said Coach Julie Oropeza.
Cameron Hutton 6 points, 7 rebounds, and 3 steals. Tahtiana Gilbert 10 points, 5 rebounds, and 2 steals. Koryann Arche 2 points, 6 rebounds, and 1 block. Neenah Guerrero 6 rebounds and 3 steals. Andrea Rios 2 points, 1 rebound and 1 steal. Hondo will come to Devine to face the Fillys on January 17th.
8th Grade Gold Fillys
It was a tight low scoring game on January 10th for the 8th Grade Gold Fillys when they faced Crystal City. It was the strong Filly defense that kept Crystal City from running away with the game but the offense could not get the baskets to sink. With a final score of 8-9, the Fillys held on to the very end but were just short of the win.
“Coming back from Christmas break is always though. The girls played tough, but the offense just had a difficult time coming up with points, we have to get back to work and continue to get better each week,” stated Coach Oropeza.
Madison Cumpian scored 5 points, Ebany Garcia 2, and Allison Dugosh 1 point. Garcia also had 6 rebounds and 2 steals.
The Fillys with face Hondo at home January 17th.