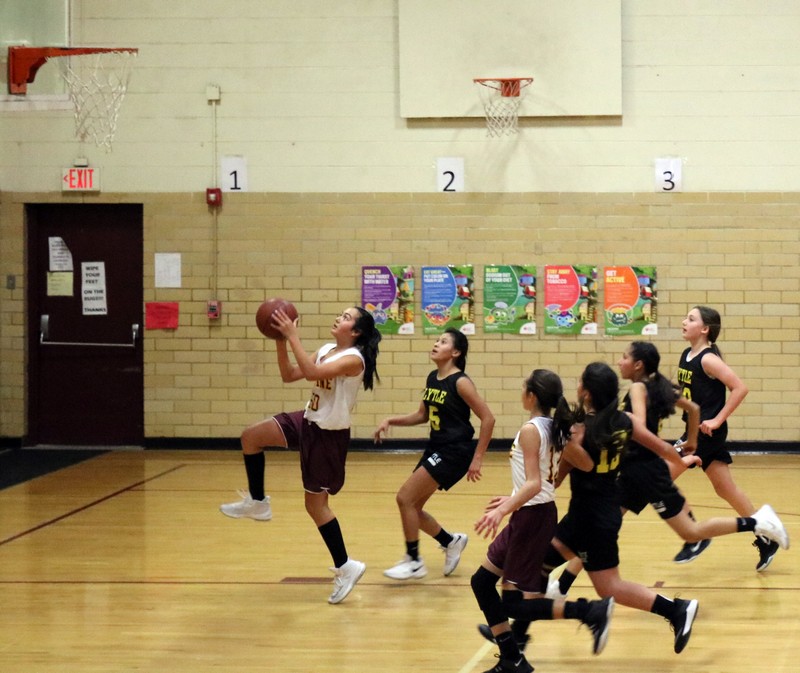 7th Grade Gold Fillys
The 7th Grade Gold Fillys had a rough start to the second half of their season with a loss to Crystal City on January 10th. Coach Shana Beaty said, “We really should have won this game. Free throws killed us. My girls went to the line 5 times during this game and we missed all 10, but the girls ran their offense. Ran play….our shots just wouldn’t go in when we needed them to. The girls were disappointed, but I wasn’t. We played hard.”
The Fillys were down 6-14 at the half and had a better second half outscoring Crystal City 8-4 but it was not enough for the win. The final score was 14-18.
Iris Stricker 5 steals and 2 points. Camryn Darby 3 steals and 2 points. Yari Mercado 3 steals, 1 assist, 2 rebounds and 4 points. Skyla Scokwell 2 steals. Austin Little 2 rebounds and 2 points. Kiara Yracheta 1 steal and 2 rebounds, Janelle Cornado 3 steals, 2 rebounds, and 2 points, Alissa Zamora 1 rebound. Liah Romero 1 steal, 4 rebounds, and 2 points.
7th Grade Maroon Fillys
In an impressive game, the 7th Grade Maroon Fillys stomped Crystal City 35-6. The Filly defense stopped Crystal City from scoring in the first quarter. Crystal City had the ball stolen from them 13 times and the Fillys were able to use the turnovers to run their offense and score. Teamwork with strong leadership led to this victory. Scores by quarter: Q1 16-4, Q2 23-4, Q3 29-4, Q4 35-6.
“Great game! Aggressive game! Everyone made a contribution on the court. As our season winds down, these girls are really showing their ‘chemistry’ on the court. Leadership is also a vital part of the game and Kelsey Dishman and Denise Contreras do well to lead this group of girls. I am very proud to represent all of these girls as their coach!” said Coach Beaty.
Dishman 2 steals, 1 assist, 4 rebounds, 1 block, and 6 points. Pamela Cardona 1 steal and 2 rebounds. Contreras 6 steals, 2 assists, 3 rebounds, and 15 points. Zoe Ortiz 4 rebounds, 1 block, and 2 points. Makayla Rivera 2 steals, 2 assists, 6 rebounds, and 6 points. Lizbeth De Los Santos 2 steals, 2 rebounds, and 2 points. Mackayla Schnautz 1 assist, 7 rebounds, 1 block, and 4 points. Avery Mobley 1 rebound.
The Fillys have just three games left; Hondo at home January 17th, in Pearsall January 21st, and Carrizo Springs at home January 31st.