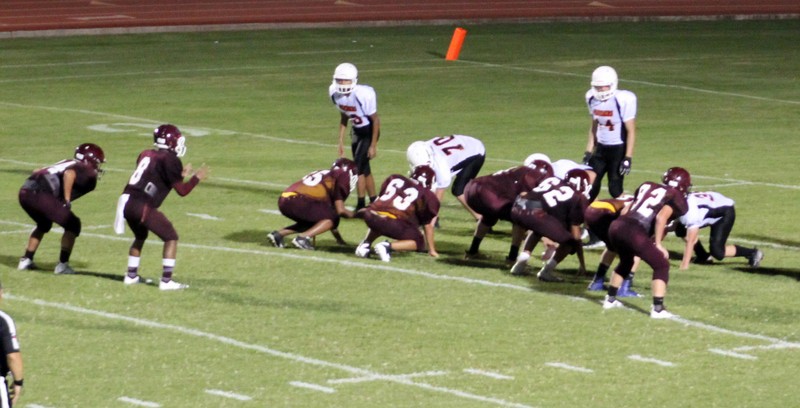 Click here for photos of Devine vs Medina Valley!

Football has started off strong for the 8th grade Colts B team with a win against Medina Valley Loma Alta. Hosting the Panthers in their first game of the season, the Colts won 6-0.
The first half remained scoreless when Caden Hanson stopped a Panther drive with an interception. In the second half, Hanson forces a fumble which Leah Rodriguez recovered. From 15 yards out, Gabriel Lopez scored the only touchdown of the game. It was the strong Colt defense that held the Panthers scoreless the rest of the half and on the last play of the game Raymond Serna sacked their quarterback causing a fumble that was recovered by Rodriguez. “Serna and Rodriguez both played great on defense, and on offense Gabriel Lopez and Rylan Mata ran the ball well,” said Coach Lon Cozby.
With a strong passing and throwing game, the Colts beat the Medina Valley Panthers 34-0. It was on the first play of the game that the 8th grade Colts A team scored but with a flag on the play it did make the score board. Determined to get the Colts into an early lead, Marcus Rodriguez scored again from 25 yards deep. The 2 point conversion was picked off.
The Colts lead grew in the second quarter when Jaiden Burford threw to Aiden Zapata for a 25 yard touchdown and not a minute later did that play repeat from 17 yards. Those two touchdowns along with a 2 point conversion put the Colts up 20-0.
Zapata found a hole during the third quarter and ran another TD from 41 yards out and in the final moments of the 4th a pass from Burford to Zapata was the final touchdown of the night ending the game 34-0.
“Our Defense played great; Medina Valley couldn’t find any holes all night. We held them to negative yards. Marcus Rodriguez and Nate Ramirez both played outstanding on the edge of defense. On offense we were able to spread the ball around which opened up the passing game.” Coach Cozby.
By Dicy Chambers
Sports Writer