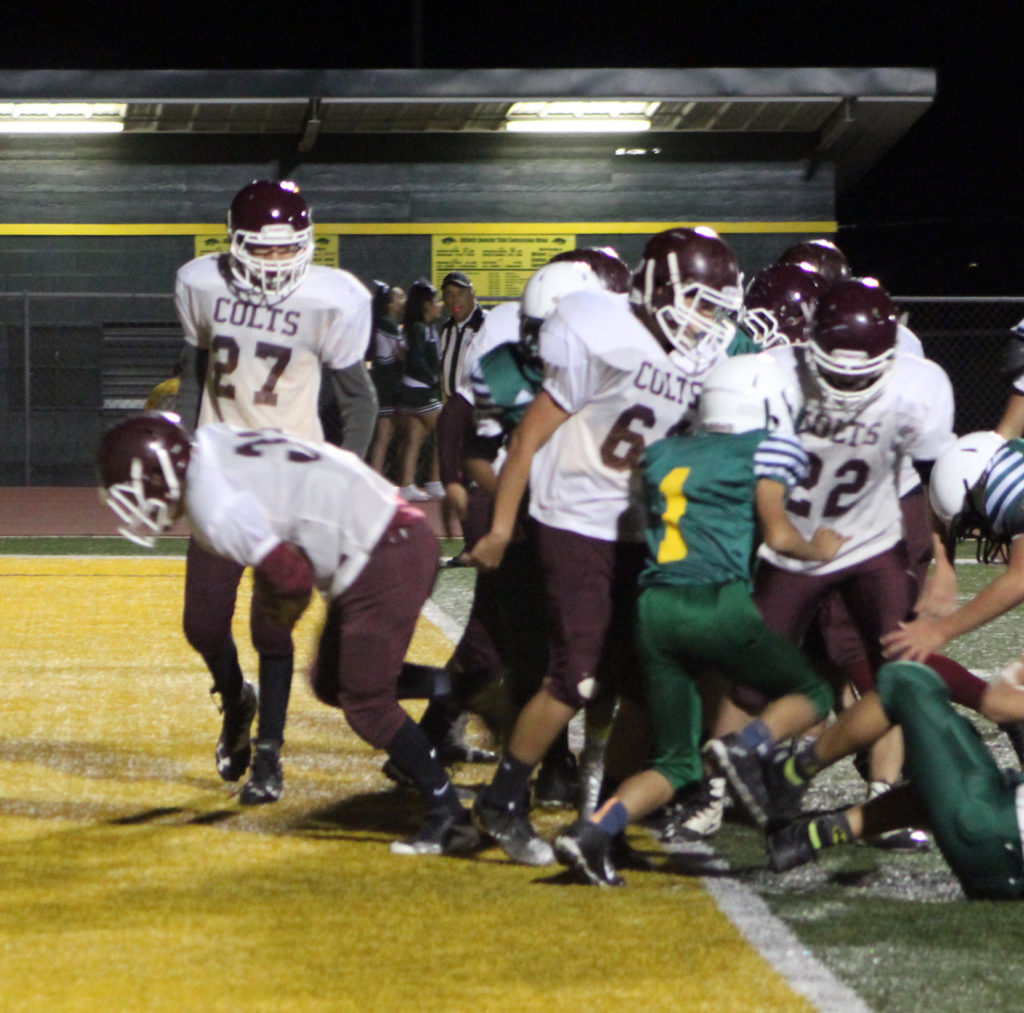 The 8th grade Colts played Crystal City on Thursday, November 9th and won 30-18.
Highlights from the first half:
In the opening kickoff Zach Rico onside recovered by Jay Solis
• Brady Hackebeil passed to Zach Rico for a 40 yard touchdown and Rico ran in the 2 point conversion
• Hackebeil passed to Chris Ortiz for a 5 yard touchdown and Robert Rosas added the 2 point conversion
• The defense had a fumble recovery in the endzone – Robert Rosas and Calvin Groom both recovered for a touchdown and Hackebeil passed to Ortiz and the extra 2 points was good
At the end of the first quarter Devine was in the lead, 24-6.
Highlights from the second half:
• Our defense blocked the punt returned. Joey Blanquiz blocked the punt, which Hackebeil caught and ran in 7 yards for the touchdown. Kannon Ramirez run for the extra point was stopped short.
“Great game to end on. The past two weeks we really started rolling on offense. The whole year our defense has been the strong point but we finished the year with back to back 30 point games,” stated Coach Lon Cozby. “Chris and Rico have become our go to receivers and Brady does a great job throwing the ball. Those three are leaders on both sides of the ball. Sage Cruz and Xavier Contreras did a great job establishing the running game which in turn opened up the passing game. Our line did a heck of a job blocking, Crystal City had some big guys. We came out and set the tone from the very beginning and never let up.”
Great season
The 8th grade Colts ended their season with records of: 8th B – 3-0 and the 8th A – 6-1-1.
“The 8th grade Colts played their hearts out every game this year,” said Coach Lon Cozby. “Only three schools had B teams so for most of the year we played as one big team. This didn’t discourage any athlete. They played hard when they were in and cheered on their teammates from the sidelines.”
“This group matured a lot since last year. We moved some kids to new positions and introduced a new offense. The kids caught on quickly and played with a lot of passion. We played some tough opponents all year. Many games we were the smaller team but this group played with no fear. They were coachable and on defense these guys would come hit you. We had some injuries throughout the season but had kids step up. I was proud to coach these guys and to end on two great games!”