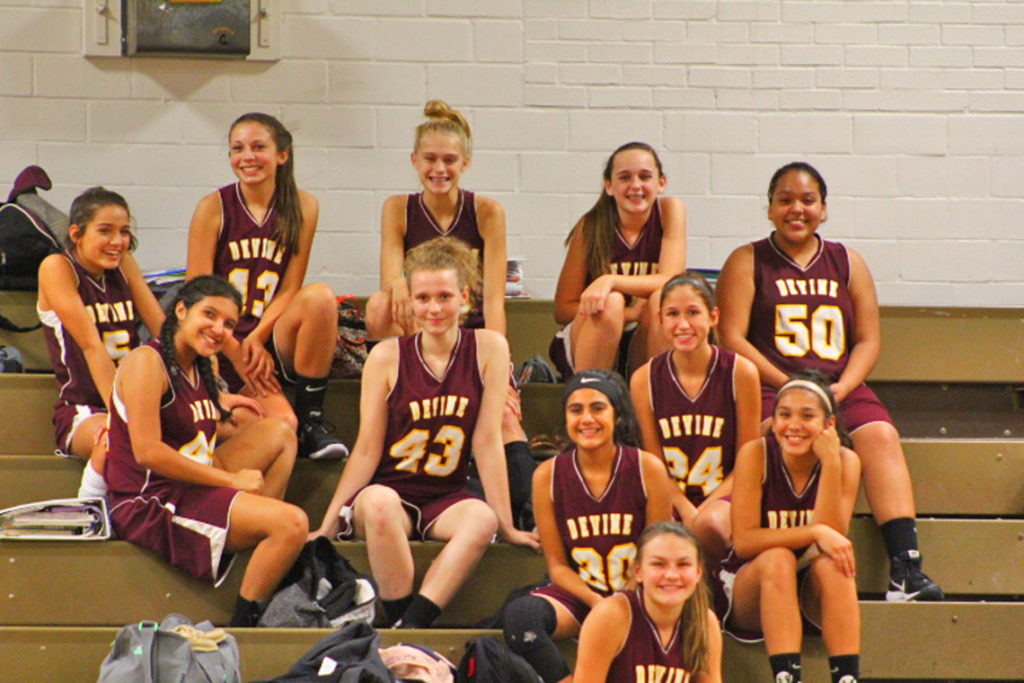 Opening their season against the always tough Pleasanton, the Gold team won 31-18. Lead by Coach Khera Vay, this 8th grade team proved that with hard work and team work they were the better team. Chasity Reyes led the Gold team with 15 points and 10 rebounds. The rest of the team contributed greatly with Darian Alvarez having 6 points and 3 rebounds, Leilani Lescano 4 points and 4 rebounds, Carmelina Bernal 2 points and 4 rebounds, Marianna Hutton 2 points and 3 rebounds, Serena Macias 2 points, Makayla Perez 4 rebounds, Emily Cruz had 3 rebounds, Brooklynn Crossland and Kylie Rodriguez each had 2 rebounds and Daisy Mendoza had 1 rebound.
“After a short week of practice, skill testing, and cramming to learn new plays, The Fillies proved that they were going to take care of business.” Coach Vay said about her team. With a positive outlook for the season Coach Vay will lead her team to many victories.
At the Hondo tournament, the Gold team faced Boerne and despite a tough opposition the team never gave up and fought till the buzzer. The 7-39 loss was taken as a lesson learned and when the team faced Hondo, they continued to be aggressive and kept Hondo within ten points. The final score was 20-27 Hondo. During the Boerne game Alvarez scored 4 points, Reyes 2 and Bernal had 1 point. The girls were more aggressively shooting in the Hondo game and Crossland, Cruz, and Macias each had 4 points while Alvarez had 7.
8th grade Filly Maroon
With the first game jittery for the Maroon team, the Pleasanton Lady Eagles took an early lead on the Fillies with a 6-0 run. As soon as the team for focused, the Maroon team turned the game around but the entire game was a fight with the score bouncing back and forth between the teams. Coach Vay was able to run a couple specially plays and the Maroon team was able to beat Pleasanton 28-25. Kelli Geyer, Macey Hein and Kadence Yates lead the rebound stat with 5 rebounds apiece and Kendall Marek lead the team with 8 points and 4 rebounds. Lacey Shook 4 points, Analisa Pompa 2 rebounds 1 point, Bri Torres 2 points, Sam Lescano 1 point, Mayah Brogdon 1 rebound and Cece Martinez and Kylee Saunders also played in the hard fought victory.
Facing Boerne at the tournament, the Maroon team lost 25-39 but when they face Hondo they triumphed 20-15. “The Maroon team did a great job with the offense and being patient during the game as well as having great effort on the defensive end,” said Coach Vay. Contributing to the score was Hein with 8 points, Shook with 5, Brogdon 3 points, and Yessika Garza and Lescano each had 2.
Coach Vay is very excited about the potential of her players and knows with more work on the basics, her teams will have many more victories. The Fillys will play at home November 16 against Crystal City.