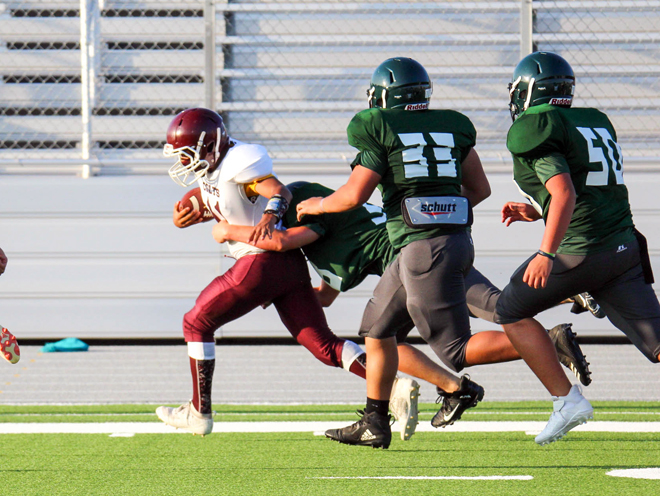 The 8th grade Devine Middle School Colts kept their spotless record in tact last Thursday in Luling and defeated the Eagles 26-6. The Colts also came back late in the fourth quarter to win their previous game against Comfort.
Wero Torres got things rolling with a 7-yard run in the first quarter to put the Colts up 6-0. Quarterback Jacob Rodriguez hit Edward Perez with a 38-yard pass to push Devine’s lead to 12-0.
That score held up until the halftime break.
Edward scampered 51-yards for the Colts next touchdown increasing their lead to 18-0.
Luling scored their lone touchdown on a 15-yard pass in the third quarter to shrink the lead back to 12 points.
Devine’s fourth and final touchdown on the night came once again from Torres as he ran 49 yards for the score. Logan Davis caught the two-point conversion from Rodrigues to close out the 26-6 victory.
“Wero and Edward had great games running the ball,” Coach Lon Cozby stated. “Our offense is right were we need it, lots of weapons so we can spread the wealth.”
The Colts defense did a great job as well limiting the Eagles to a single score.
“Our defense keeps playing hard and not giving up much of anything, yards or points right now,” Cozby continued. “Joseph Stafford is a move in and has emerged as a kicker for us. He’s been practicing hard and really has improved which will help us on specials.”
Up next
The Colts take on Refugio Thursday at Warhorse Stadium. Kickoff against the Bobcats is scheduled for 6:30pm.
By Jerel Beaty
Staff Writer