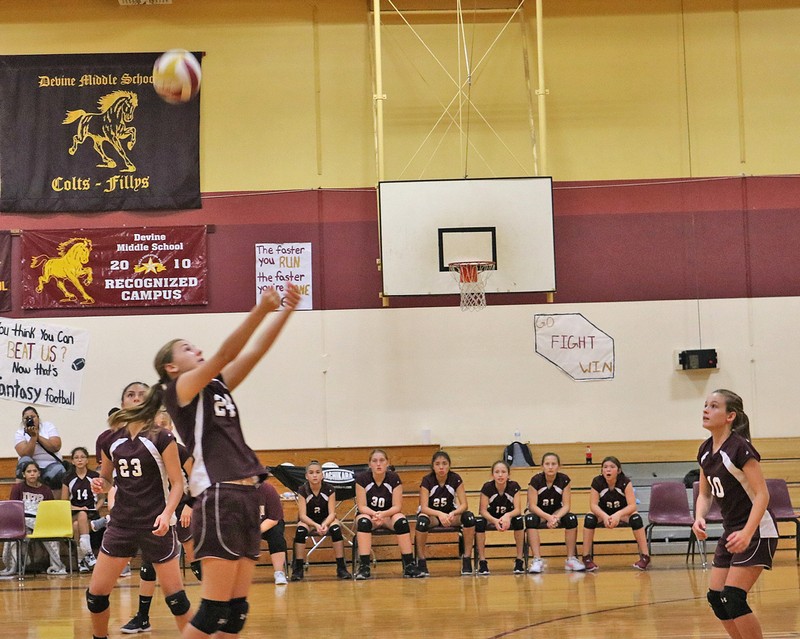 Click here for photos of the 7th grade Fillys!

With scores of 25-4 and 25-7, the 7th grade Maroon Fillys easily beat the Lady Aggies of Poteet Monday night. With a team total of 14 aces, Poteet could not get to the serve in time and could not stop the 8 team kills.
“This team does some pretty awesome things on the court. They were relaxed enough that they played with ease and confidence showing me they had the game under control. The girls dominated the entire game causing us to only get through four rotations. I went on to substitute my girls in the game who needed to play, and they did a great job adjusting to the positions whether they were playing their normal position or not. They all can play anywhere! Congratulations girls! We are now 5-0 in district play!” – Coach Shana Beaty
Rylee Esquibel served 4 aces, Brooklyn Miller 4, Lizbeth De Los Santos 3, Kody Blanquiz 2, and Kate Featherly 1 ace. Miller had 7 hits at the net, Mackayla Schnautz 3, Avery Mobley 3, Zoe Ortiz 3, Blanquiz 2, and Featherly 1 hit. Miller had 4 kills, Ortiz 1, Featherly 1, Mobley 1, and Schnautz 1 kill. Featherly had 3 assists, Esquibel 2, Miller 1, and Yancy Parson 1 assist.
Congratulations on this winning streak.
Carrizo Springs
After beating Carrizo Springs on Monday, September 24th, the 7th grade Maroon Fillys held on to their undefeated title. They may have won 25-9 and 25-17, but the Fillys worked hard for every point. “This was a good win. Carrizo Springs fought hard, tried to hold their own with us, and did a good job serving more aggressive in the second match, but my girls dominated the court the majority of the game. What I would like to see from my team is them taking advantage of the free ball coming over the net and setting it up to attack every time.” Coach Shana Beaty.
Kaylee Romano served 8 aces, Kody Blanquiz 7, Rylee Esquibel 6, Kate Featherly 5, and Lizbeth De Los Santos 4. Brooklyn Miller, Rylee Esquibel, Featherly each with 2 hits, Zoe Ortiz and Denise Contreras each with 1. Miller and Esquibel with 2 kills each and Contreras and Mackayla Schnautz each with 1. Featherly had 3 assists and Esquibel had 2. Kelsey Dishman and Romano had 2 digs each, while De Los Santos, Kody Blanquiz and Angelina Solis each had 1.
The 7th grade Fillys will head to Crystal City on October 8th and then home to face Hondo on October 15th.
By Dicy Chambers
Sports Writer