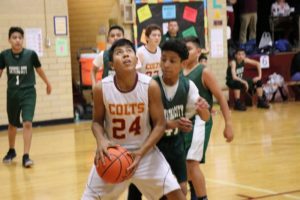 7th Grade Gold Colts
The 7th Grade Gold Colts continue their winning streak with a huge victory over Crystal City. Coming out aggressive and playing as a team, the Colts won 78-10.
“The boys competed well and we came out with the win. I am proud of the boy’s competitiveness throughout the entire game. Roger Gutierrez had a great game offensively and Jose Morales played great defense. We played great team ball for our seventh win of the season,” said Coach Jacob Sanchez.
They are now 7-0 overall and 5-0 in district. They will play in Hondo tomorrow night and then hold a tournament this Saturday.
Roger Gutierrez led with 20 points, Adrian Gutierrez 16, Victor Schaefer 12, Zack Serna 8, Kolt Hackabiel and Johnathan Weinkam 6 each, Diego Estrada 4, and Sebastian Espinoza, Corey Dirck, Jose Morales, and Jordan Roberts 2 each. They made 4 of their 11 free throws.
7th Grade Maroon Colts
It was an impressively tight game against Crystal City and it came down to the very end. Devine lost 45-46 after a hard fought game.
“Against a team like Crystal City, you have to be ready to play from the tip off. We came out strong this time around but could not sustain the lead. These young men showed a lot of heart. Aaron Bonilla led the team with 14 pts. Quenton Sanders really came up big during several spots of the game. We missed all of our free throw attempts and that was what really made the difference in the game. We will continue to play hard and get better every day,” said Coach Sanchez.
Aaron Bonilla led with 14 points, Sammy Guardiola and Brandon Martinez 8 each, Quenton Sanders 5, Luke Friesenhahn and Adrian Beltran 4each, and Zander Morris 2.
The Maroon Colts are now 3-4 overall and 2-3 in District. They will play in Hondo Thursday night and will host their tournament this Saturday.