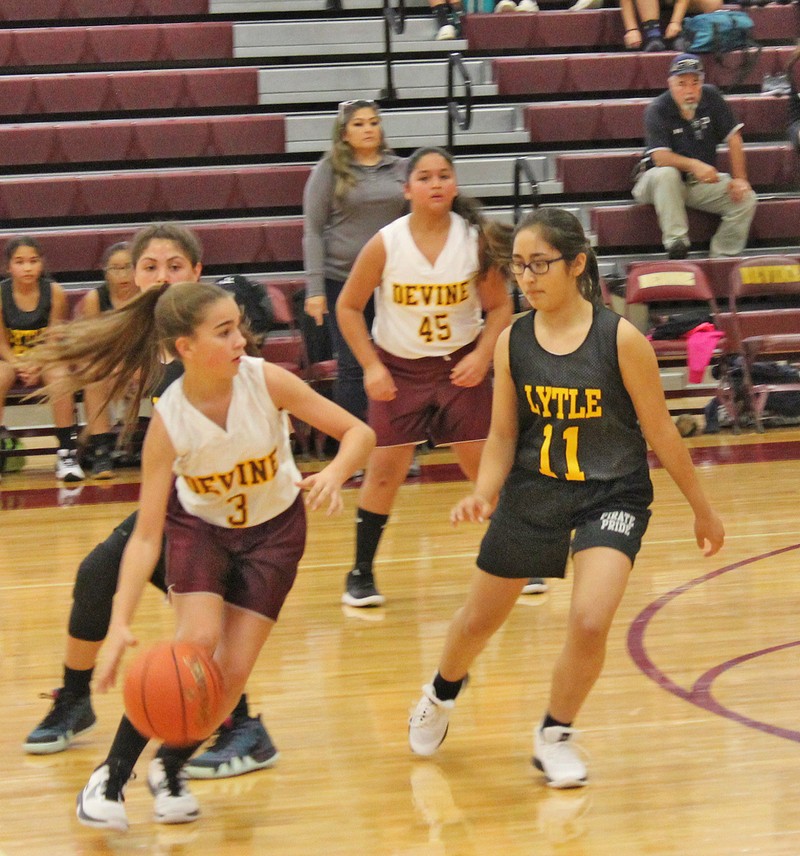 7th Grade Gold Fillys
Beating Pearsall was a huge win for the 7th Grade Gold Fillys on December 6th. Taking the lead early in the first quarter, they ran their offense and Pearsall could not break their defense. Scores by quarter: Q1 6-4, Q2 10-6, Q3 20-11, Q4 29-17.
“These girls needed this win to gain some confidence! They are only going to get better. We improved a great deal on our plays and on offense. We still have some fundamentals things to work on but they will get there! Our defense was much better as well,” stated Coach Shana Beaty.
Liah Romero had 10 points, Iris Stricker 9, Janelle Cornado 4, Yari Mercado 2, Kiara Yracheta 2, and Cameryn Darby 2. Romero 16 rebounds, Stricker 4, Yracheta 4, Mercado 2, Coronado 2, and Emily Mares 1. Mercado 5 steals, Romero 5, Stricker 4, Yracheta 3, Mares 2, Cornado 1, and Ailssa Zamora 1. Mercado had 1 assist.
The 7th Gold Fillys are now 2-4 overall and 2-2 in district with Poteet on Monday night and then a break until after the new year.
7th Grade Maroon Fillys
Pearsall was no match for the 7th Grade Maroon Fillys on December 6th. The Fillys held Pearsall to just 7 points the entire game. Playing aggressively the whole game, the Fillys never let their lead go to their heads and played with heart. Scores by quarter: Q1 10-2, Q2 18-2, Q3 24-7, Q4 29-7.
Kelsey Dishman had 9 points, Denise Contreras 9, MaKayla Rivera 7, Macki Schnautz 2, and Avery Mobley 2. Mobley had 6 rebounds, Schnautz 4, Rivera 4, Lizbeth De Los Santos 3, Contreras 2, and Dishman 1. Contreras 3 steals, Dishman 3, Rivera 2, De Los Santos 2, Zoe Ortiz 1, and Schnautz 1. Dishman had 2 assists. Contreras had 1 blocked shot.
“The girls did a great job this game. They still get confused from time to time but they played with much more confidence. I appreciate Pearsall’s effort. The score didn’t really affect how hard they played against us. We are looking forward to Carrizo Springs,” said Coach Beaty.
By Dicy Chambers
Sports Writer