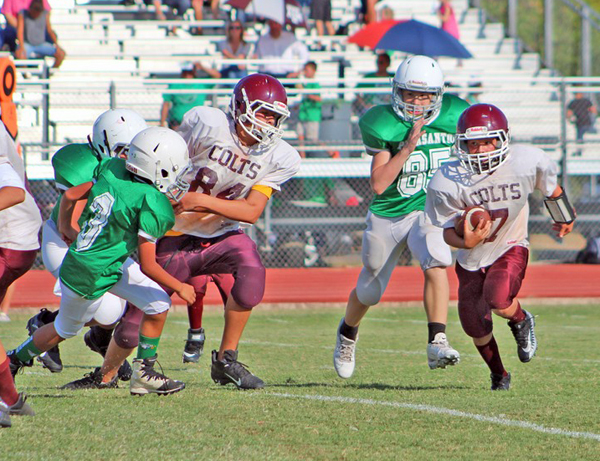 7th Gold Colts
The 7th Grade Gold Colts took the field against Pleasanton on September 19th and some players did not leave the field did until the game was over. A few had to play offense and defense but that did not stop them from winning 8-0.
“I was really anxious to how our Colts would respond after the scrimmage versus Cornerstone. We practice well all week, and I think that showed in our two victories against Pleasanton. I couldn’t be more proud of the fight and mental toughness it took to win that game 8-0. Tate Wisenbaker provided the game’s only score on an 80 yard run for a touchdown! Ayden Leal (QB) and Jayden Reyes (RB) might be the toughest little guys I have seen in a long time. Alfredo Ramirez was by far the best defensive player on the field during the game. He was flying around like he was shot out of a cannon, and made tackle after tackle,” said Coach Quenton Sanders.
7th Maroon Colts
It was a win that came late in the game for the 7th Grade Maroon Colts. Unable to score until the last two minutes of the fourth, Wero Torres ran in the touchdown and then the two point conversion to put the Colts ahead, 8-6.
“We scored only because Coach Sanchez’s O-line dominated and wore down the Eagles. Our defensive co-MVPs were Elijah Contreras and Jaysen Ramirez. Both linebackers made play after play after play to help keep the Eagles at 6 points. Tyler Pike was also a force on the D side of the ball he has tremendous upside.
“We are just trying to improve day by day, game by game. The young men are starting to figure things out, and that is always fun as a coaching staff. That’s why we do what we do, and we enjoy every minute of it. We want to watch them succeed. We have Bandera at Warhorse stadium on Thursday. Hopefully we can keep this thing going in a positive direction,” stated Coach Sanders.
The Colts will play September 26th with games starting at 4:30.