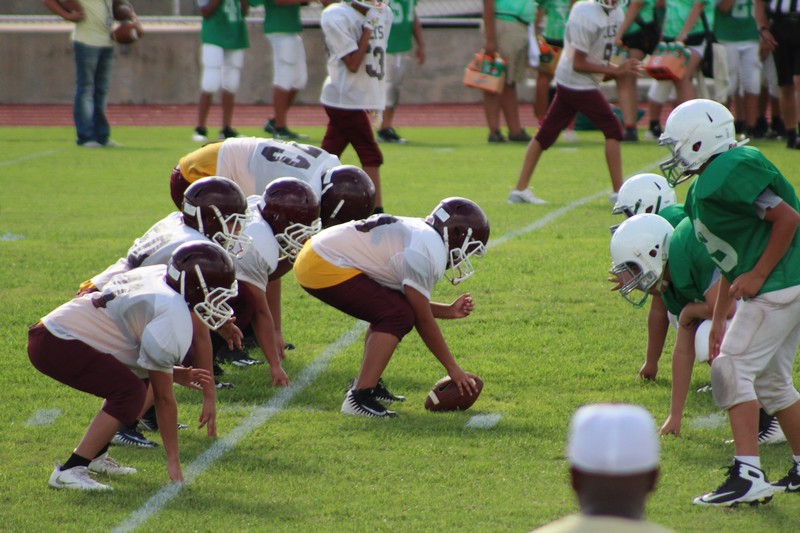 Click here to see photos of the 7th grade Colts vs. Pleasanton!

In their first game split between Gold and Maroon, the Gold 7th grade team lost to Pleasanton 0-14. The young team worked hard and despite the mistakes made some great plays. The first half was slow for the Colts but their game picked up in the second half.
After the Eagles’ second touchdown, Roger Gutierrez had a huge tackle during the two-point conversion, stopping the runner and preventing the score. Diego Gerlach proved to be a great leader and Dominique Valerio and Ace Urrea were great runners every time they got the ball.
“Overall vs Pleasanton I thought the 7th grade did well. We still made too many mistakes for my liking, but once we fix some of the small mistakes this could be a really good group. If we can continue to build on the 2nd half this B-team will be pretty darn good,” stated Coach Quenton Sanders.
Maroon Colts
The 7th Grade Maroon Colts had a hard fought tie last week against Pleasanton. The game ended 8-8 and despite the Colts’ three turnovers they only allowed Pleasanton to score once.
Elijah Sanchez scored in the Colts’ touchdown after a 65 yard run and the Jonathan Weinkam was able to make the two-point conversion. Sanchez also recovered an Eagle fumble in the second quarter. Gabriel Esquibel gained a lot of tough yard as the ball runner.
“The defense played great! They did not give up a single point. I’m proud of how the whole defensive unit played. We look forward to the next test versus the Bandera Bulldogs,” said Coach Quenton Sanders.
By Dicy Chambers
Sports Writer