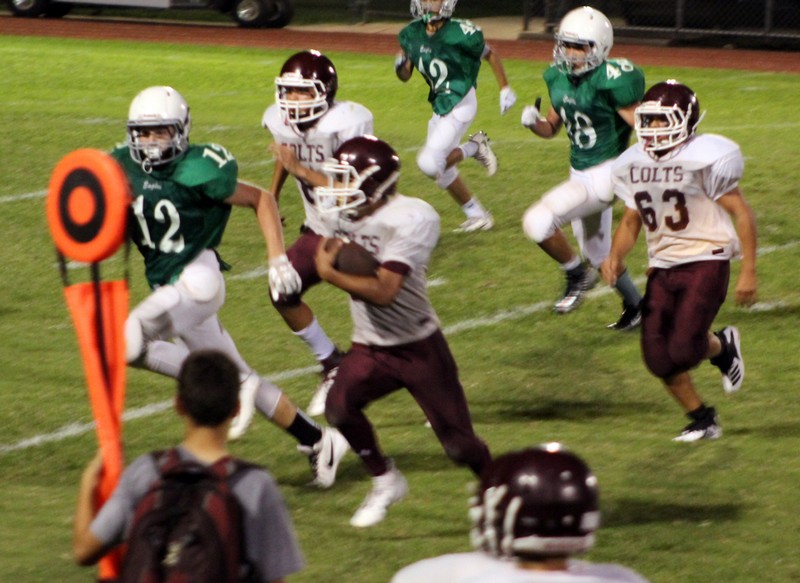 Click here for photos of the 8th grade Colts vs. Pleasanton!

Last Thursday night was a great night for the 8th Grade Gold Colts with a win over Pleasanton. With the passing and running game working, the Colts were able to score two touchdowns. Rylan Mata and Johnny Lascano gained a lot of yards when they ran the ball. Gabriel Lopez ran in from 45 yards out after a reverse from Mata.
Caden Hanson was able to find his receivers, Jack Schneider, Thomas Mendoza, and Noah Macias for some great catches and huge gains down the field. But it was Jonathan Gelinas that caught the ball in the end zone for another Colt touchdown. The pass was from about 25 yards out.
“Pleasanton had a huge return on the kickoff which was going for a TD until Zach Johnson showed some great speed and ran down the ball carrier right before the goal line. They were able to score but Johnson’s play showed our team we weren’t going to give up,” said Coach Lon Cozby.
The game ended with strong defense and a tackle for a loss by Raymond Serna. The Colts won 12-8.
Maroon Colts
The 8th grade Maroon Colts tied with Pleasanton at 14 each, on September 20th. The Eagles proved to be a tough team when they scored the first touchdown and two-point conversion in the first. But Jaieden Burford stopped a second touchdown when he stripped the ball on the 2 yard line and the half ended 0-8.
The Colts came out of the locker room determined to make the adjustments needed to stop the Eagles. On the first possession of the half, Marcus Rodriguez broke tackle after tackle to get the ball into the end zone for the Colts’ first touchdown of the night. Rodriguez ran it in from the 35 yard line.
“After a huge 4th down pick up on a reverse pass from Aaron Saenz to Jaieden Burford, Marcus found the end zone from 7 yds. The 2 point run from Aiden Zapata was good and the Colts took the lead 14-8 with 5 min left in the game,” stated Coach Lon Cozby.
Late in the 4th quarter, Pleasanton was able to tie the game after a long drive but the Colts’ defense was able to stop the two-point conversion. The last plat of the Colts’ game ended when Burford’s pass was intercepted with three seconds left.
“We had a tough time this game. This was the best team this bunch has faced to date. Along with it being a tough team, we dug ourselves a hole. We sputtered on offense and on defense gave up some easy plays. I was proud of the effort in the 2nd half. When this team plays like that from the opening kickoff, they are hard to beat,” said Coach Cozby.
By Dicy Chambers
Sports Writer