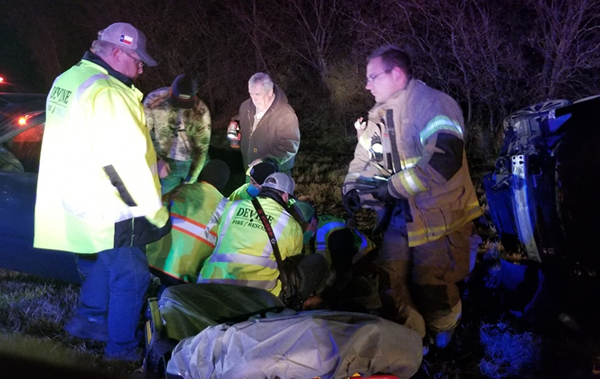 Three young women were involved in a terrible accident this past Saturday, January 2 around 9:30 pm. An off-duty deputy and passerby who just happened to be in the area helped two of the young ladies get out of the vehicles, and helped save one of their lives using an emergency tourniquet to stop the severe bleeding until other first responders could arrive. A third young lady in the accident was able to crawl out of the vehicle on her own. It happened just past Biry at intersection of CR 467 and Hwy 173.
According to reports, a vehicle with two young ladies on CR 467 passed a stop sign and was then T-Boned by a vehicle traveling north on SH-173. The driver and passenger of the vehicle that passed the stop sign were both transported with non-life threatening injuries. The driver of the vehicle traveling on SH-173, 20-year-old Hannah Wood of Devine, was transported with the most serious injuries and was still in the ICU this Tuesday. Our thoughts and prayers are with all involved, and especially young Hannah who has so many friends, family members, and the community praying for her recovery at this time. Witnesses said that Wood, who had the right of way on Hwy 173, tried her best to veer to the side as much as she could when she saw the vehicle pull out in front of her, most likely saving the life of the other driver.
Local Deputy Jerry Thomas, of Devine, was off-duty that Saturday night, but just happened to right there at the time of the accident.
“I was on my way home in my patrol unit, and I ended up behind the vehicle that went through the stop sign. So I saw the whole accident happen,” Thomas said.
“When I ran up to the first vehicle, I was so happy to see that she was alive, because it was a terrible accident. I assessed her and spoke to her for a minute, and then I ran to the other vehicle,” he adds. “One of the girls inside the other vehicle was trapped, so we got her out. Then a gentleman that had stopped to help said that he could see the bone protruding and severe bleeding in one of the girl’s legs, so I ran and got a tourniquet to put on her left leg to stop the bleeding.”

“I didn’t do anything special that any other officer wouldn’t have done,” Thomas said. “I was just in the right place at the right time. I want to thank the other gentleman who stopped to help and I also want to thank Sheriff Brown for allowing us to drive our patrol units even when we are off-duty, because of situations like this. I was in the patrol unit so I had that tourniquet, that radio to get a hold of dispatch quickly, road flares, and all of that. This isn’t the first time me, or other deputies, have driven up on a situation where someone needed help while we were off-duty. So it’s a really great service that he allows us to do that.”
Hannah’s mother, Shannon thanked everyone who came to help and gave an update on her daughter’s condition.
“Hannah is recovering in the Intensive Care Unit at University Hospital. She has a long recovery ahead of her but is a fighter. She has undergone several surgeries already. God has been good,” said her mother Shannon Wood, on Tuesday afternoon by phone. “Robbie and I appreciate every first responder, emergency personnel, the anonymous man who stopped immediately to help take care of all the girls, as well as neighbors who came out to help in the dark night. Special thanks to Medina County Sheriff’s Office Deputy Jerry Thomas who saw it happen, stopped and immediately went into action with life saving measures. Even his wife came out to help as he was almost home. We would also like to thank the community of Devine who has been amazingly supportive, we are so grateful and proud to be a part of this community.”
Shannon and her husband Robbie have been able to be with Hannah as much as possible at the hospital.
DPS worked this investigation. Responding for Devine Volunteer Fire Dept were Chief Robert Scott, firefighters Richard Hitchcock, Ethan Yanta, Paul Gengler, Daniel Ehlinger, Byron and Justine Hruzek, Michael Saldana, Melanie Dossey, and Mike Walker.
There was another accident near Devine on I-35 around the same time, tying up some of the first responders. Thankfully with the new training that many Devine volunteer firefighters have received, they were able to help perform emergency medical response on these young people until EMS could arrive. One EMS unit responded from Hondo, and Devine had a second EMS unit that was able to respond to this accident as well.
By Kayleen Holder and K.K. Calame