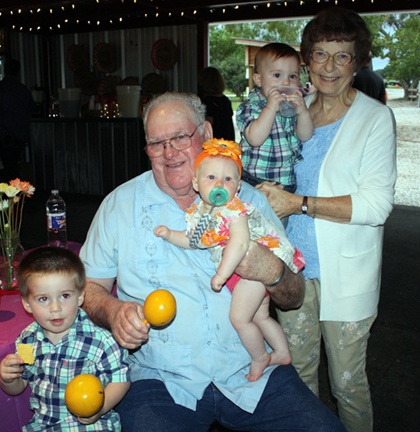 “Well I’ll give you my number, and you can call me collect,” he said. That was 57 years ago on the day Mr. Woodie Gene Capps walked up and asked his future wife to dance. The two lovebirds, Gene and Rosalie Capps, met on the dance floor outside an old “hole in the wall” joint called The Ranch House between Devine and Pearsall. It was before the days of big weddings, fancy proposals, and even before home telephones became the norm. Their first real date started with a phone call made from a telephone booth, and while those and many other trends came and went, their love keeps ringing true.
“I saw him coming and he had gray hair. I didn’t know what I would tell him. Sure enough, he walked up and asked me to dance, but the first thing he said to me is ‘I know my hair is gray, but I’m not that old.’ I said okaaay. But it was true. He got gray hair before he was ever out of high school!”
They were both in their early 20s at that time. She was a young mother who had recently lost her husband. He had recently returned home from the military, and he sure fell in love when he saw Rosalie standing there. Despite his gray hair, he was a good dancer, she noted with a chuckle and a sparkle in her eye.
“We danced that dance, and danced for the rest of the night. I never danced with anybody else,” Rosalie said.” When it was time to leave, he said he would call me. I told him I didn’t have a phone. That was back in the 60s, and not everyone had a home phone in those days. So, he said ‘well I’ll give you my number and you can call me collect.’ So I agreed, and when it was time to call, went down and used the telephone booth at the gas station in town! Remember those? The gas station is still there, but the telephone booth is long gone.”
“After a few dates, I thought to myself—he’s a pretty nice guy. I wanted to be really sure though, because I already had a child. So we dated for about 2 and a half years before he asked me to marry him,” she said.
And it wasn’t no fancy proposal like we plan out today….” He just looked over at me and said ‘Well are you gonna marry me or not?’ Just like that!” she shook her head laughing. “That’s what he said, and I said yes.”
“I liked her a lot, so I thought I’d lock onto her,” Pop adds with a smile. “I was a young buck back then. We made a good pair.”

They had a small family church wedding in her hometown of Sabinal on August 14th, 1965, and made their home together in Devine.
She guesses her best advice for making marriage work is “don’t go to bed without saying I love you.” She adds, “Sometimes you are mad and you want to beat him, but you say I love you before you lay down and go to sleep, because you do love them (no matter how mad you are).”
“Keeping my mouth shut and not talking back,” adds Pop Gene, when asked for his best marriage advice. “I go along with her and she goes along with me.”
Rosalie adds, “I remember one of his brothers saying ‘It’ll never last.’ Well, here we are 57 years later. We’ve had a really good life, and we sure proved his brother wrong.”
Sure, “there will be hard times,” Rosalie said, “but you just have to know it will get better tomorrow and keep going, and it always does.”
“I feel like most of the time, we were barely scraping by, but we were very fortunate in that my husband always had work,” Rosalie said. “We didn’t do a lot of extravagant things or go a lot of places once we had a family but we had a good life.”
With all their kids grown and raised, they have more time to spend together and to play with the great grandchildren. Now they do “everything together”, even mowing the lawn. Except for the dishes, she adds, because Pop probably wouldn’t do them right!”
Everyone in Devine knows the warm welcome and hugs of “Pop and Grandma” as they are affectionately known at Devine Acres, the family farm. Pop worked in the oilfield for 40 years and construction for another 8 years, and Rosalie has worked at the bank (now Security State Bank) for about 40 years too. They both witnessed many changes all around them over the years, but their love kept right on going.
“We finally retired, but only to go work at Devine Acres and the bank part time,” Rosalie laughs.
“There’s a lot to overcome, but if you’ve got each other, you can overcome a lot,” Rosalie said. “And Pop would probably tell you the same thing. You just make the best of it. You’ve got to keep on living. Fifty-seven years is a long time. I hope we make it to 60! I’ll tell you one more thing. The support of friends and family means a lot, it means everything.”
“The most precious gift in our lives are our children Cynthia Gan, Kenneth and wife Debi Capps. And of course our grandchildren: Kenneth & Trish Gobar, Anthony and Katherine Gan, Eric and Cheyenne Gan, Tiffany Gan, Megan Gan, Wesley Gan, Josh and Brittany Capps, Emily and Ernie Morales, Mason and Alyssa Capps, and Abbie Capps. And our great grandchildren: James, Alexander, Madaline Gan, Grace Gan, Eli, Emmett, Everett Morales, Audrey Capps, and one on the way (Audrey’s new baby brother) to be born in March. We aren’t sure what his name will be but little Audrey has him named ‘John Wayne’ Capps,” they said with a chuckle.
By Kayleen Holder
Editor