A young couple tragically lost their lives in a horrific accident on Hwy 16 on the edge of Medina County last Tuesday afternoon, August 22 at 12:20 p.m. Tamera Alyssa Currier , 19, and Kristian Kononchuk, 22, were both killed in a head-on collision sadly, leaving behind many loved ones who say the couple were both extremely generous, caring, and loving, with a passion for helping others. The couple was soon-to-be engaged, according to Tammy’s sister Catty. 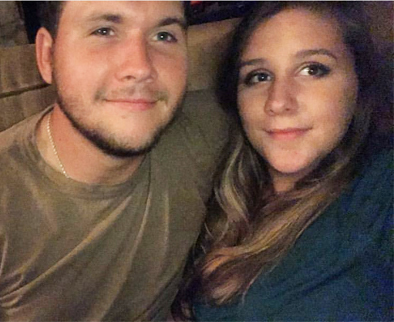 The driver of the other vehicle, Stephen Williamson, age 40, was airlifted to University Hospital and was listed in stable condition. The cause of the collision between the Jeep Patriot and the Jeep Compass has not been determined, and DPS continues its crash investigation.
“Tammy loved her boyfriend Kris,” said Tammy’s big sister Catty Currier, “He was going to propose to her in two weeks. She would have said yes….. She never thought she’d find love, but she found Kris. He loved her very much. Their passing is a tragedy, but they were together and that gives our family comfort.”
Twenty-two year old Kris had just celebrated a birthday recently, according to his great aunt Betty Snyder, of Natalia. He was a welder by trade and was living in the Lytle area.
“He was the most loving, kind hearted, caring, hard working person,” Snyder said. “He always had a smile on his face. He would do anything for anyone. I love and miss Kristian. He loved hunting fishing and making knives. And loved his family.”
“On behalf of our family, we would want to say to everyone thank you for the prayers, comments and condolences for Kristian and Tammy, and our family,” Snyder added.
Nineteen-year-old Tammy was a student at San Antonio College.
“She was still trying to decide on her major,” her sister Catty Currier said, “but she wanted to work with animals and she was also interested in social services, and law, and pretty much anything that meant she got to help others.”
Tammy was raised in Helotes, and graduated from O’Connor High School in Helotes last year, but she also attended Bandera High School for a while living in the Pipe Creek area. Horses and Barrel Racing were two of her passions, and she enjoyed the weekly rodeos in Bandera, family said.
“Tammy was the exception,” adds her big sister Catty, “It was almost impossible to believe you were talking to a teenage girl. She had such an old soul…. My sister is the love of my life. We are exactly 10 years and 8 days apart. And from the second she was born she was my everything.”
“Tammy was always the first one to offer help and the last one to ask for it. She would give you everything she had if it would make you smile. We never fought as sisters, we were attached at the hip when we could be. As soon as she was old enough to be out of her crib, if we were in the same house we slept in the same bed. I would play with her hair until she fell asleep. Even after we grew up and I developed night terrors…. I would hit her in my sleep, and Tammy would never leave me.”
“She loved horses her whole life. Animals in general is something she was passionate about. She was always bringing home strays.”
The accident happened in Medina County about 1 mile from Bandera, according to family.
“No one knows where they were going when they got into the accident,” Catty added. “They could have just been driving just to drive, Tammy had just gotten her new car 2 days before the accident.”