The National Weather Service issued the following information and warnings regarding the tropical storm brewing. 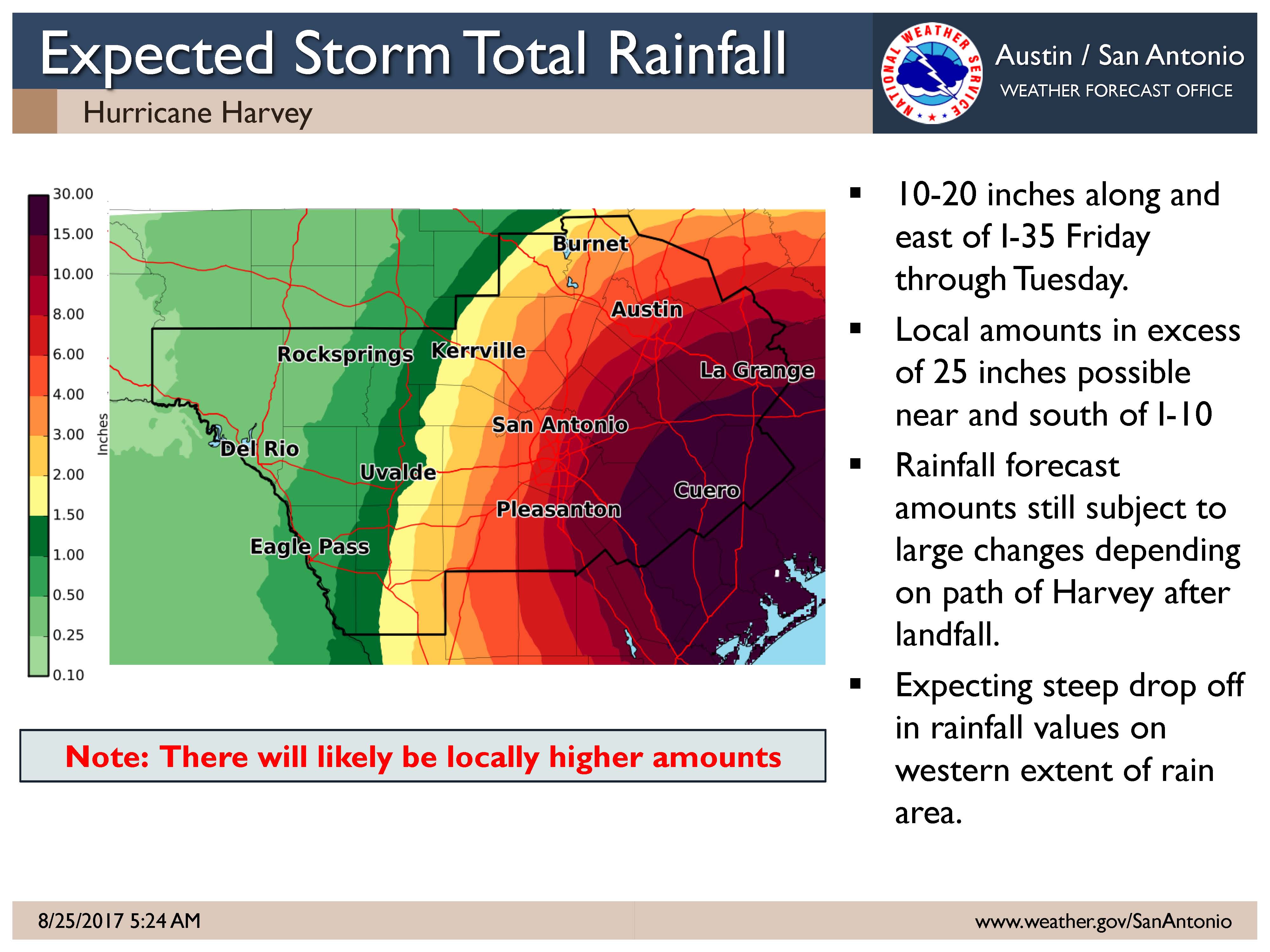 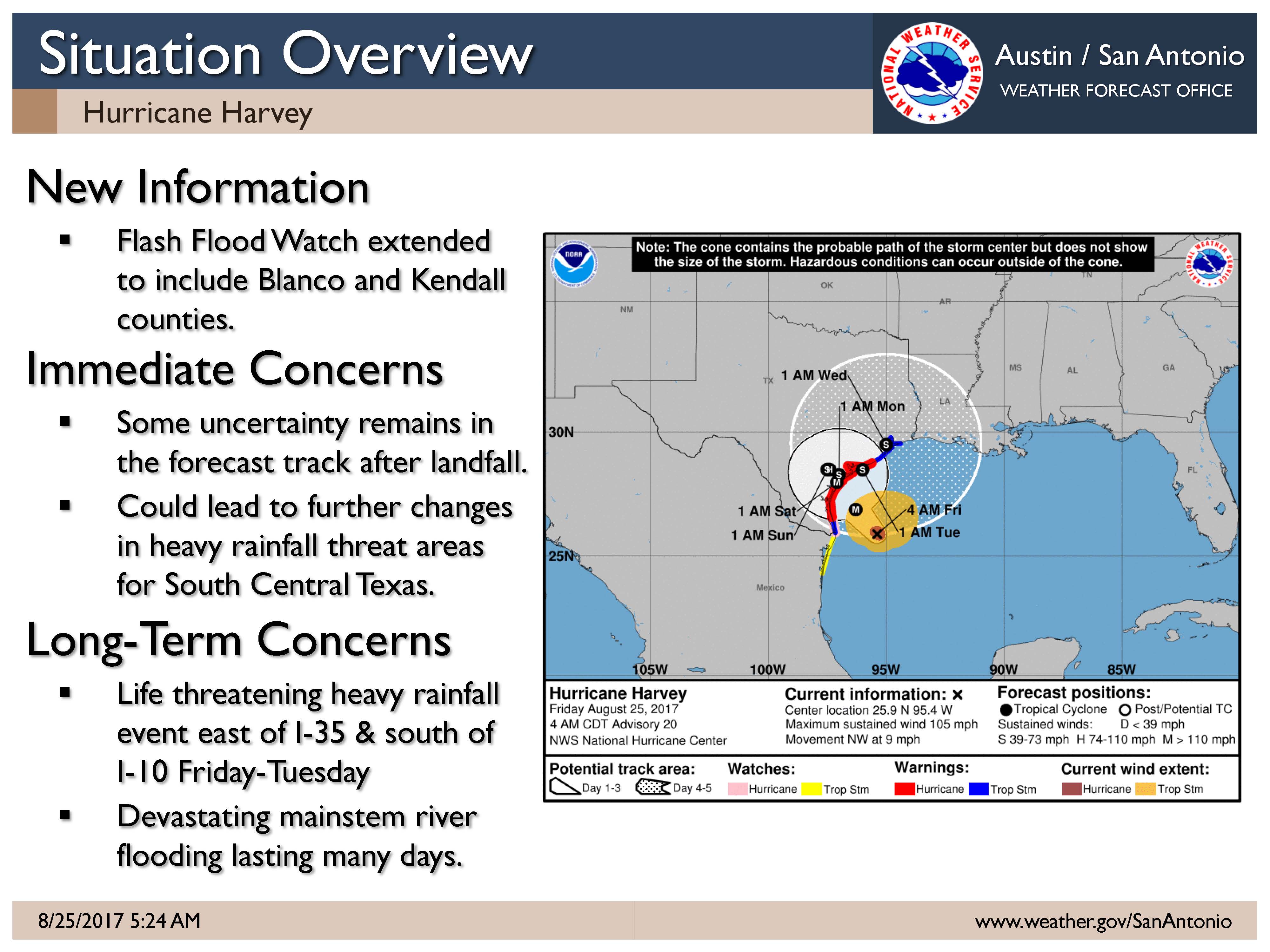 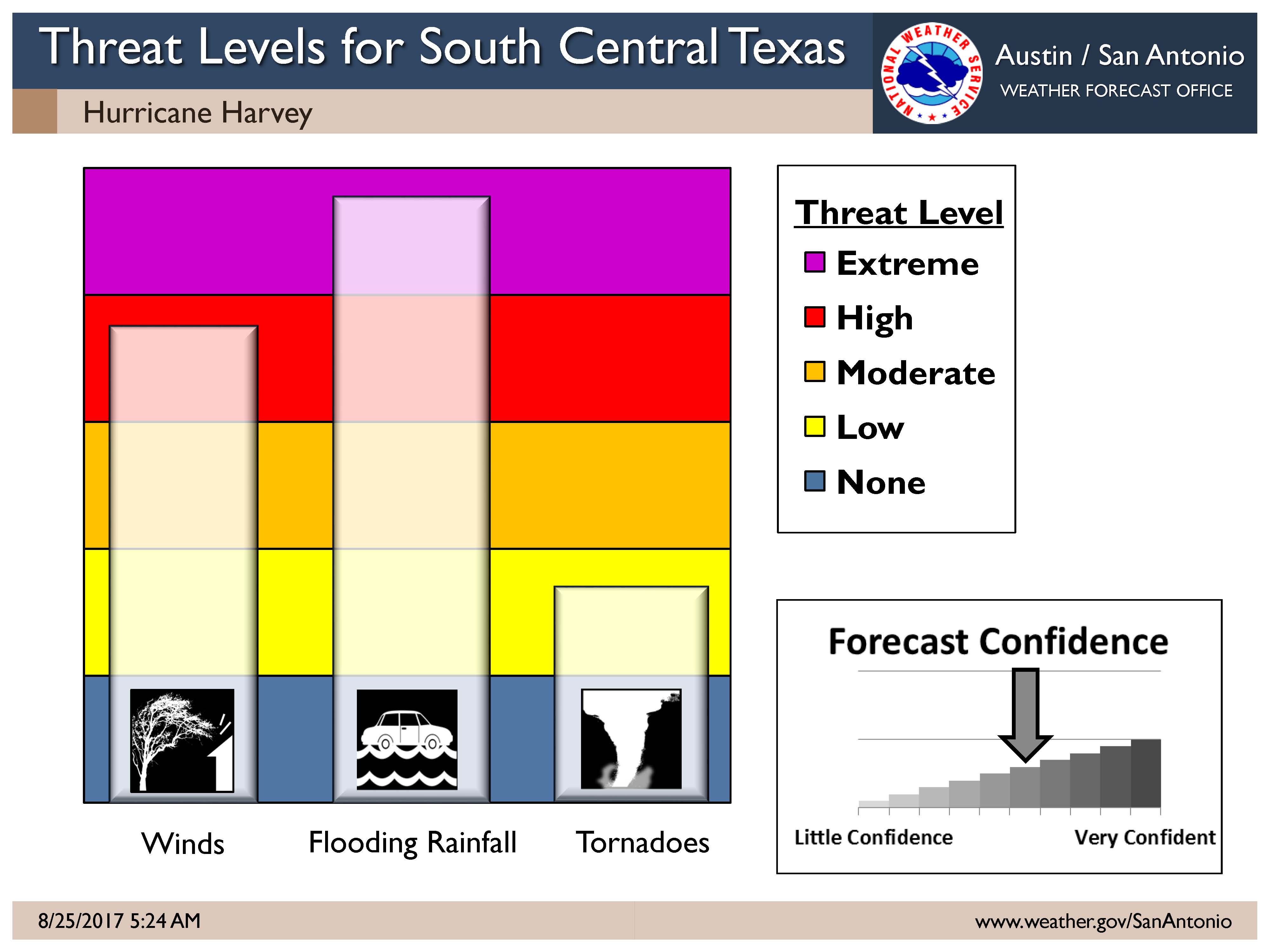 Key Messaging Points:
• A life-threatening and prolonged heavy rainfall event is expected across inland portions of South Central Texas.
• Average rainfall amounts of 10-20 inches are expected along and east of I-35 Friday through Tuesday. This potentially includes the cities of San Antonio and Austin. A Flash Flood Watch is in effect for these areas. Areas outside the Flash Flood watch area in the southern and eastern Hill Country could see 5-10 inches with isolated higher amounts.
• Isolated higher totals in excess of 25 inches are possible near the Highway 77 and I-10 corridors.
• Devastating mainstem river flooding lasting many days is possible east of I-35 in the Colorado, Guadalupe, and San Antonio river basins.
• 70-80 mph winds are expected for counties in the Hurricane Warning. Large trees could be snapped, power lines downed, and damage to homes could occur. Power and communication outages are likely.
• 40-50 mph winds are expected within the area now under a Tropical Storm Warning with gusts to 60 mph. Damage to trees and power lines are possible, leading to scattered power outages.
• There remains uncertainty in the forecast track and intensity of Harvey across Texas. Only small changes to the track, intensity, and/or forward speed of Harvey could result in large changes to flooding and wind impacts across South Central Texas.

Update Since Last Briefing:
• The Flash Flood Watch has been expanded to include Kendall and Blanco Counties to account for uncertainty in western and northern edge of the heaviest rainfall.
• SPC has issued a marginal risk of severe thunderstorms capable of producing brief tornadoes and straight-line wind damage through Saturday morning along and east of a Floresville to Austin to Taylor line.
• A tight rainfall gradient is expected on the western and northern edge of Harvey’s precipitation shield, potentially near or along the I-35 corridor. Small shifts in the forecast track of Harvey and where it stalls this weekend before moving eventually moving east by the middle of next week could result in very large differences in rainfall totals.

Threats & Impacts:
Note: Changes in track and intensity may dramatically change the impacts and locations of these threats/impacts.
Rainfall: (Moderate for I-35 Corridor; High east of the I-35 Corridor)
• 10-20 inches of rain along and east of I-35 today through Tuesday. Isolated totals may exceed 25 inches near the Highway 77 and I-10 corridors. Life-threatening flash flooding and devastating river flooding is expected across this area.
• Areas outside of the Flash Flood watch area in the southern and eastern Hill Country could see 5-10 inches with isolated higher amounts.
• Rainfall totals of less than 3 inches are expected across the Western Hill Country and Rio Grande.
Winds: (Moderate Confidence)
Hurricane force winds of 70-80 mph are possible across areas currently in the Hurricane Warning. Tropical storm force winds of 40 to 50 mph, with gusts to 60 mph, are possible across the area currently under a Tropical Storm Warning. These winds will be most likely on Saturday, but they may arrive as early as Friday afternoon.
Tornadoes: (Low Confidence)
There is a marginal risk of tornadoes along and east of a Floresville to Austin to Taylor line. These small tornadoes are typically very short-lived and can spin-up quickly during the daytime or nighttime hours.

Timing and Overview:
Hurricane Harvey is currently a Category 2 hurricane and is expected to strengthen into a major hurricane prior to making landfall between Corpus Christi and Port O’Connor early Saturday morning. Harvey is still expected to weaken and stall inland over South Texas over the weekend through at least Monday before potentially moving east on Tuesday. A life-threatening flash flooding threat is expected along with devastating mainstem river flooding inland over portions of South Central Texas. We continue to stress that there is uncertainty with the track and speed of Harvey. Small changes to the track, intensity, and/or forward speed of Harvey will result in large changes to flooding and wind impacts across South Central Texas.

At this time, we urge you to remain closely aware of the changes to the forecast over the next 24 hours by monitoring the National Hurricane Center (www.hurricanes.gov) and your local forecast (www.weather.gov/sanantonio).