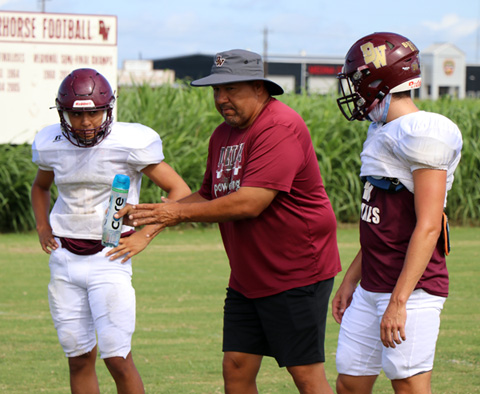 Devine scrimmages Central Catholic Friday, August 13 in San Antonio for their first of two scrimmages in preparation for the 2021 season. Central Catholic is coming off a Covid-shortened 2020 season in which five of their regular season games were cancelled.
The Buttons went 3-1 in TAPPS District 2-1 before losing their bi-district playoff game 21-14 to Argyle Liberty Christian. Pre-district opponents Central Catholic this season are San Antonio Southwest, Boerne Geneva, San Antonio Alamo Heights, and Laredo United South as their pre-district opponents.
August 27 the Buttons open against San Antonio Christian before playing Houston St. Thomas, Tomball Concordia Lutheran, Houston St. Pius X, Katy St. John XXIII, and San Antonio Antonian.
Warhorse Head Coach Paul Gomez looks forward to the challenge an early season test for his players against unfamiliar competition can bring to his team.
“Central Catholic has nine returning starters on offense including an offensive line that are all 270lbs or above,” Gomez said in addressing the veteran presence the Buttons have. “They will be a great test for us. Coach Mike Santiago runs a great program over there and Central is picked to make a run for the TAAPS state championship. We are excited to make ourselves better and look forward to a great week of practice.”
When and where
If you plan making the 35-mile trip into San Antonio, Bob Benson ’66 Stadium is located on the campus of Central Catholic High School. The address is 1403 N. St. Mary’s Street with a 78215 zip code.
Tentative plans have the freshman and JV beginning at 5:00pm on opposite sides of the field. Varsity is set for 6:00pm. Please have some patience if times are pushed back a little to avoid heat if necessary. Although the chance of rain is currently 20% in that area for Friday, an umbrella can also be used to shield the sun from beating down on you.
By Jerel Beaty
Staff Writer