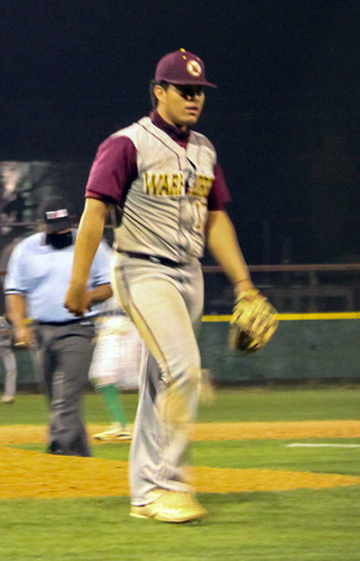 The Varsity Warhorses are still battling through pre-district and sit at 5-10 after going 1-1 last week. They beat Crystal City 2-1 onTuesday and then fell to Uvalde 2-13 on Friday. They still have time before district starts on April 9th to get ready.
On March 23rd, Devine hosted Crystal City and sent them home with a loss after 7 innings. Devine scored 2 runs in the bottom of the 5th. Samuel Guardiola was hit by a pitch, Jacob Barron singles to short stop, 1 out, Rover Gutierrez doubles and brings in 2 runs. Crystal City scored 1 run in the bottom of the 7th.
Guardiola 1 run. Camden White 1 single. Sage Cruz 1 single. Gutierrez 1 single, 1 double, 2 RBI. Hadyn Brummage 1 single. Barron 1 single, 1 run. Colin Dishman had 51 strikes in 85 pitches and Michael Alers had 4 strikes in 6 pitches.
Uvalde was a tough team to face on Friday. Devine fell 2-13. They had one run in the first and a run in the fourth but could not hold the Wolves back from home. With three pitches on the mound for Devine, the Warhorses were able to work the pitchers’ arms without exhausting them. Hanson threw 19 strikes in 37 pitches, Alers 29 strikes in 52 pitches, and Barron 7 strikes in 13 pitches.
White 1 single, 1 run. Gabriel Esquibel 1 single. Cruz 1 single. Gutierrez 1 double. Alers 1 single, 1 run. Brummage 1 RBI. Barron 1 single.
The Warhorses will be back in action tomorrow, April 1s in Cuero and then in Hondo April 9th.
By Dicy Chambers
Sports Writer