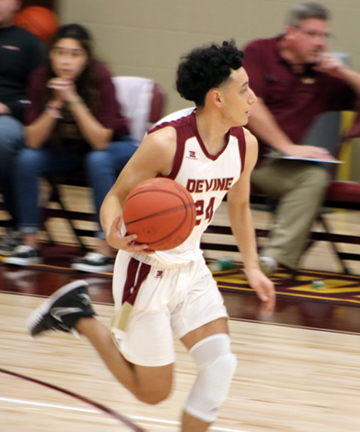 The Warhorses headed to the Randolph Tournament December 28th and 29th. After going 2-2 and achieving their goals of getting back into shape after the holiday break and getting better as a team, the Warhorses are ready to take on Carrizo Springs Friday and Crystal City on Tuesday. Both games are on the road.
At the Randolph Tournament, each school entered one player to compete in the three-point contest. Devine selected Caden Hanson and it was a great choice. Hanson sank 38 free-throws to win it. He was one shy of tying the tournament record of 39.
Devine opened against Blanco. Falling behind in the first quarter, the Warhorses fell 39-71 to the team that would go on to win the tournament.
“We came out with great defense against the tournament winner Blanco but we just struggled to score enough,” said Coach Evan Eads.
Marcus Espinosa had 2 points, Sage Cruz 6, Hanson 8, Elijah Contreras 5, Isaiah Morin 2, Chris Ortiz 2, Kaiveri Alverez 23, Peyton Carr 2, and Zavier Contreras had 8 points.
Devine face Crystal City in their second game and Crystal City could sink their shots. They won 42-80 after the disappointing game.

X. Contreras lead with 11 points, Espinosa 1, Hanson 10, E. Contreras 6, Morin 6, Ortiz 2, and Carr 6 points.
On the second day of the tournament, the Warhorses turned it all around and started the day beating Lutheran. Down 19-26 at the end of the half, the Warhorses fought hard to tie the game up at the end of the third.
“Lutheran extended the lead late in the fourth quarter by 8 points and then went to the line to shoot free throws. #34 missed both free throws and Lutheran never scored again. X. Contreras made two 3 pointers and Cruz made a layup to tie the game. We got another stop that lead to Hanson making a 3 to point us up for good. Kaiveri Alvarez made free throws late to put the lead out of reach. It was our best finish of the year,” added Coach Eads.
Espinosa 2 points, Cruz 4, Hanson 9, Morin 2, Ortiz 6, Alverez 12, Carr 6, x. Contreras 18 points.
In their last game, the Warhorses took down Randolph.
“Two Warhorses had rolled their ankles, but the rest of the team stepped up and held Randolph to a 4 pointsecond quarter and a 2 point fourth quarter, for the Devine win at 52-32,” said Coach Eads.
Hanson lead with 14 points, Espinosa 8, Cruz 5, Morin 1, E. Contreras 2, Ortiz 6, Carr 8, and X. Contreras 8 points.
Devine will take on Carrizo Springs and Crystal City in their last two non-district games and then head to Somerset to open district on January 14th.
By Dicy Chambers
Sports Writer