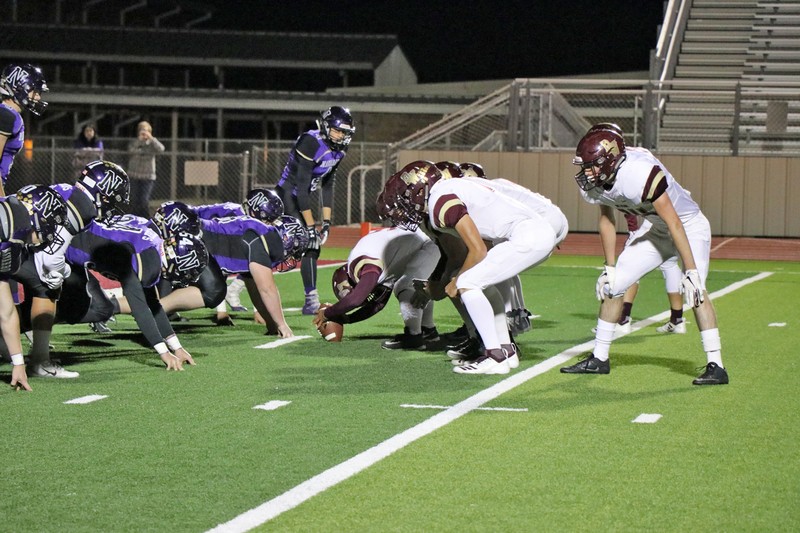 Click here for more photos of the Warhorses’ game vs Navarro

Son of a gun. The Devine Warhorses almost pulled off one of the biggest upsets in terms of point-spreads in first round high school playoff history. Going into the game as much as 30-point underdogs in some polls, Devine had a 9-point lead in the fourth quarter before eventually coming up 10-yards short of a winning touchdown on their final drive of the game.
The Warhorses provided their fans plenty of thrills and reason to believe that an upset was in the making throughout the game, only to give way to heartache with under a minute to go. Navarro erased a nine-point, fourth-quarter deficit to claw their way back to the 34-30 victory.
“It was definitely a tough loss,” stated Head Coach Paul Gomez. “It’s going to take a while for us to get over this one. I felt like the kids left it all on the field Friday night. We matched Navarro’s intensity and executed our game plan well. A couple of plays here or there and we would be the Bi-District Champions.”
Navarro did not waste any time getting points on the board. After corralling an opening kickoff at their 25-yard line, the Panthers Bryan Butler took the first snap 75 yards for the score with only 17 seconds off the clock to get out to a 7-0 advantage.
No problem for Devine. After a nice return by Brady Cardenas, Guido Zapata took Devine’s first play 56 yards to even to score at seven.
The Panther’s Johnny Alegria scored from 31-yards out on their next possession before Zapata got into the end zone for the second time, this time on a 17-yard pass from Chad Lawson. The game was tied at 14 at the end of the first quarter.
Devine took a 20-14 lead into the halftime intermission on a Lawson 3-yard run.
The Warhorses increased their lead to nine for the first time on Grant Collins’ 42-yard field goal with 4:28 in the third quarter. Navarro responded fifteen seconds later with a 6-yard run by Butler to trim the margin to 23-21. 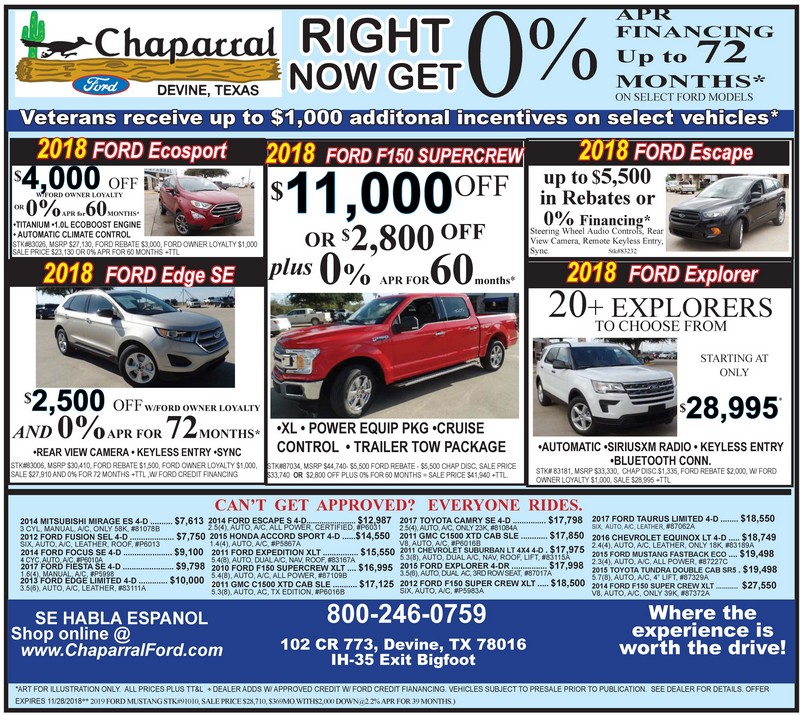 Lawson scored what wound up being the Warhorses last touchdown on the season on a 3-yard run, putting Devine up 30-21 with 11:17 in the game.
Navarro put together a nice five-minute drive to cut the Warhorse lead to 30-28 with just over six minutes left in the game. Devine needed the ensuing drive to not only wipe valuable time off the clock but to hopefully end with 7-points.
It wasn’t to be, however. Cardenas once again returned the Panther kickoff into Navarro territory but Devine went backwards 10 yards on the drive and was forced to punt with plenty of time on the scoreboard.
Although Lawson’s punt pinned Navarro back at their own 10-yard line, the Panthers needed only three plays to go 90 yards to take the lead 34-30. Devine converted two fourth down opportunities on their closing drive but was unable to score after getting a first-and-goal from the ten.
“I’m sure it was an exciting game to watch from the stands with the all the lead changes and big plays,” Gomez continued. “I am extremely proud of our boys. We ask them to sell out for the program and that is what they did. We had a good game plan going in offensively and defensively. Navarro has a good defense and we knew that we had to trust the running lanes created by our offensive linemen to be able to run north and south.
We are a big play team so we knew we had to take some shots down the field. We made some big plays and, unfortunately, we missed a few as well. That’s playoff football.”
Final drive
“To have a chance to win it at the end at the 10-yard line, you know, that’s all we can ask for,” Gomez stated. “I really liked our chances at that point of the game. We had the ball at the twenty and got a pass interference penalty called in our favor at the one-yard line. Of course, if the pass interference had been in the end zone and not at the one then we would have had the ball at the two-yard line with a 1st and goal opportunity.
We had a couple of plays along the way where we either ran the wrong route or heard the play wrong in the huddle; that can’t happen in a playoff game. However, we are human and we are going to make mistakes.”
Defense
“Defensively I think our kids were definitely locked in,” Gomez said. “I think we were disciplined and flew to the ball. We felt confident going against their offense. We have a long, successful track record defending the nasty slot-T offense.
I firmly believe this was one of our best games. Navarro’s big plays were ‘influence plays’ where they pull their offensive lineman one direction but run the ball the other way. Obviously, that is not what they do on a regular basis.
Navarro did not use that scheme against Cuero who is one of the top teams in the state in Class 4A. Influence blocking is typically 15% of their offense and we shut down the other 85%. We took them out of their comfort zone and made them change their entire offensive scheme to beat us.
Coach Villa had a great game plan going into the night, and I think our boys executed about as well as they could have. The plays Navarro scored on, if we just could have gotten off a block it would have allowed us to make a tackle to minimize their gain on the play. Obviously, we could have been better but I think we did a good job.”
Turnover
Forcing good teams to turn the ball over isn’t an easy task. Navarro coughed up the football four times with the Warhorses recovering two of those.
Deme Monreal popped the football free from a Panther running back in the first quarter, which Guido Zapata recovered at the Navarro 32-yard line. Four plays later, quarterback Chad Lawson hit Zapata on a quick screen at the 17. Guido eluded a would-be tackler then sprinted up the right sideline to put 7 points on the board after Navarro’s first turnover of the game.
Midway through the third quarter with Devine up 21-14, outside linebacker Brady Cardenas jarred the ball loose from a Navarro runner. Zapata recovered his second fumble of the game at the Panther 41.
After the Warhorse drive stalled at the 25-yard line, Grant Collins booted a 42-yard field goal to produce three points off that Navarro turnover giving Devine 10 points, or a third of their total points, off Panther mistakes.
So long Floresville
“I don’t know if I will ever want to play a playoff game in Floresville again,” Gomez half-jokingly said but I happen to whole-heartedly agree, but for another reason. “After last Friday night’s game and of course the one in 2010 that Devine lost to Cuero on a crazy night, I don’t really want to go back. That place is bad luck.”
Losing two playoff games in the same stadium defines hard luck for sure. In addition, there were no sandwiches or coffee in the press box for Jimbo and me. Goodbye and good riddance, Eschenburg Field! 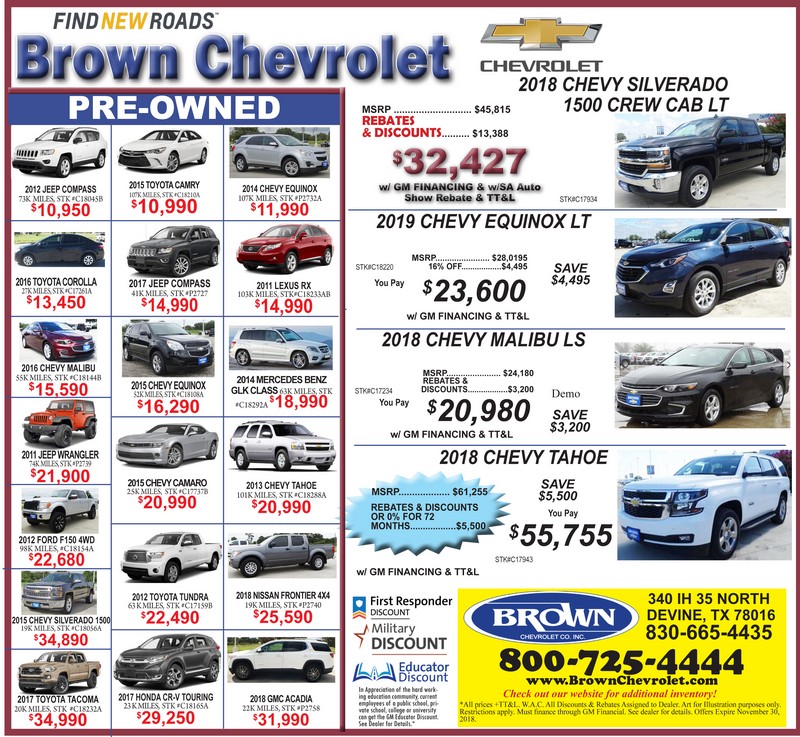