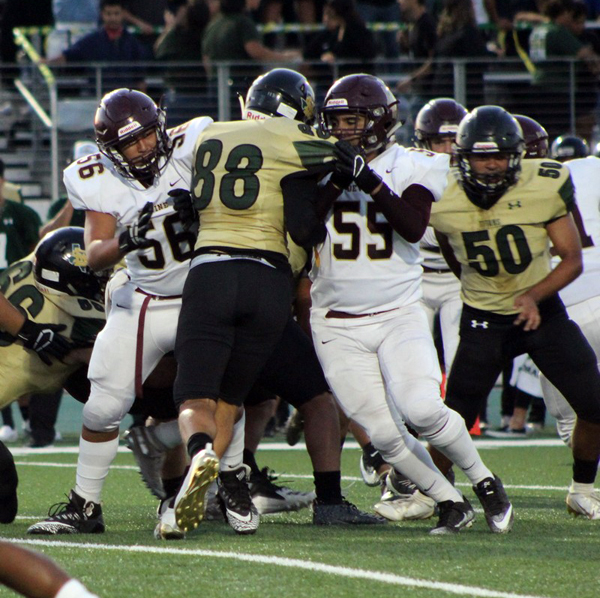 A tough pill to swallow for the Devine Warhorses last Friday at San Antonio Southwest Legacy. Devine put together several good drives throughout the ballgame but could not manage to cash in on those opportunities. The Warhorses fell 31-7, dropping their record to 1-2 on the season.
“Although it was a very disappointing loss for us, I have to give Legacy all the credit as they are a very good football team,” Head Coach Paul Gomez began. “They were able to take advantage of their opportunities and made some big plays throughout the ballgame. Yes, they are about 10 students away from being a 6A School and yes they have twice as many players on the sideline as us, but that is not what got us beat. We just didn’t execute well.”
Against good teams, mental mistakes and penalties can doom a team from the beginning of the game and we appeared to be our own worst enemy at times Friday night. We started with a big play getting us 1st and goal at the 5yd line. A couple of penalties later, we were backed up to the 15-yard line and it becomes more difficult to execute in a 1st and 20-type situation.
“We gave up some big plays defensively primarily because of lack of execution. We had players there to make the play, but we just did not follow through.”
Their quarterback was very accurate; he put the ball right on the money. But it seemed like in each one of those plays we had a defender there to make a play but we just didn’t trust our scheme enough and that second or two seconds of hesitation was all that they needed to make a big play.
“Offensively, we missed too many opportunities. Our receiving group are good blockers and can catch the ball, but we missed a few crucial blocks along the way that would have sprung our backs for some big gains. We will improve in that area.”
Isaiah Oropeza did a good job of running the offense but he has to do a better job of just throwing the ball out of bounds to avoid a bad play. Even though he made a couple of errors, he will learn from those and be better next time out.
“I am not saying we should have won because there is so much that happens in a game to change momentum and turn the game in favor of a team, but I feel if we would have executed a little better, then we would have given ourselves at least a chance to win.
“I have been saying all year that we just have to take care of what we can control and that is us. As coaches, we have to do a better job of getting that effort from our players. I told the players that this loss was on me that I did not do a good enough job of getting them ready to play.
“I did not yell at them after the game, just spoke from the heart and told them our focus and intensity was missing and that we would get it back. We will definitely have an intense week of practice that is for sure.
“One positive was new kicker Jacob Featherly. Jacob was thrown in the fire and, after his first extra point that he missed; he nailed the second one perfect. His kickoff was great as well. We are glad to have him playing and he will definitely be a weapon for us in the field goal department and in field possession with his kickoffs.
“I am anxious to see how we respond during practices this week and in the game against Pleasanton. Sometimes people say these early season games do not mean anything but that is false. Every game allows for growth as a player and as a team. Identities begin developing; an identity that will help players and teams be the best that they can be once district does start.”
This Friday versus an undefeated Pleasanton team will allow us to grow and develop once again. We are looking forward to the challenge.
Kickoff is set for 7:30pm.
Scoring recap
LEG—Zezar Tovar to Jorge Pineda 18-yard pass (Javier Lira PAT), 11:12, 2nd.
LEG—Tovar to Javier Murillo 45-yard pass (Lira PAT), 6:41, 2nd.
LEG—Homer Flores 33-yard run (Lira PAT), 0:38, 2nd.
LEG—Lira 23-yard FG, 7:18, 4th.
LEG—Tovar to Pineda 48-yard pass, 4th.
DEV—Isaiah Oropeza to Justin Contreras 15-yard pass (Jacob Featherly PAT), 0:04, 4th.
By Jerel Beaty
Staff Writer