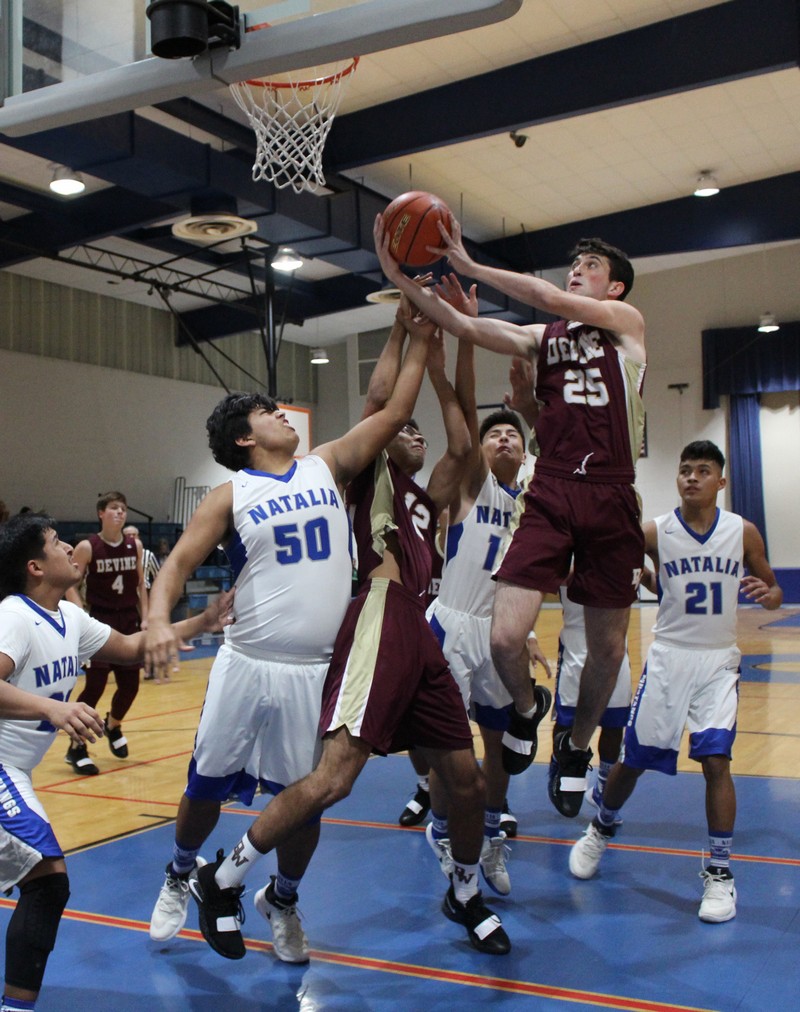 Last weekend in the Marion Varsity tournament, the Warhorses went 1-3 against some powerful teams. Coach P.J. Wells and his team worked hard against every opponent and finished every loss within 5 points of the other team.
Facing Marion in their opening game, the Warhorses led at the half and end of the 3rd quarter. Marion was able to earn the lead in the last few moments left on the clock and the Warhorses lost 35-40. Cash Walker scored 10 points, Justin Contreras 8, Dalton Kramer 5, Kam Adams and Brady Cardenas with 4 each, and Leonard Pompa 3. Scores by quarter: Q1 8-12, Q2 21-15, Q3 27-26, Q4 35-40.
In their second game of the day, the Warhorses fell to Canyon Lake 49-50 after a strong comeback late in the fourth quarter. Trailing 28-38 at the end of the third, the Warhorses out shot Canyon Lake 21-12 and were just a couple of points shy when time ran out. It was a strong finish. Cash Walker scored 13 points, Contreras 12, Pompa 6, Kramer, Adams and Damian Martinez 5 each, Mason Burford 2 and Cardenas 1.Scores by quarter: Q1 10-11, Q2 22-23, Q3 28-38, Q4 49-50.
Saturday morning was a different story for the Warhorses when they beat Gregory Portland 59-39. Coming out ready to control the ball and play aggressive defense, they held Gregory to only 17 points in the first half. Adams led with 14 points, Walker 11, Martinez 10, Kramer 9, Cardenas 6, Contraras 4, Pompa 3 and Sergio Martinez 2.
In the final game of the tournament, the Warhorses struggled against Wimberley but they still kept the final score tight. Tied at 7 at the end of the first, Wimberley slowly started to out shoot Devine and lead 25-23 at the half. Behind 30-41 at the end of the third, the Warhorses fought hard to close the gap and were only down by four points at the end of the game. Walker led the Horses with 18 points, Kramer 13, Contreras 6, Adams and Cardenas with 4 each, Pompa 3 and D. Martinez 2.
“In reality we lost 3 games by a total of 10 points. We could have won those games as well and went 4-0. We need to be mentally prepared to start ballgames and we need to finish ballgames better. Very happy with our effort, but our execution needs to get better,” stated Coach Wells.
Overall it was a learning opportunity against stronger teams and the Warhorses used every game to improve their skills. As of the Marion tournament, the Warhorses record stands at 4-3.The Warhorses will host their home tournament this weekend followed by the Pleasanton tournament next weekend.
By Dicy Chambers
Sports Writer