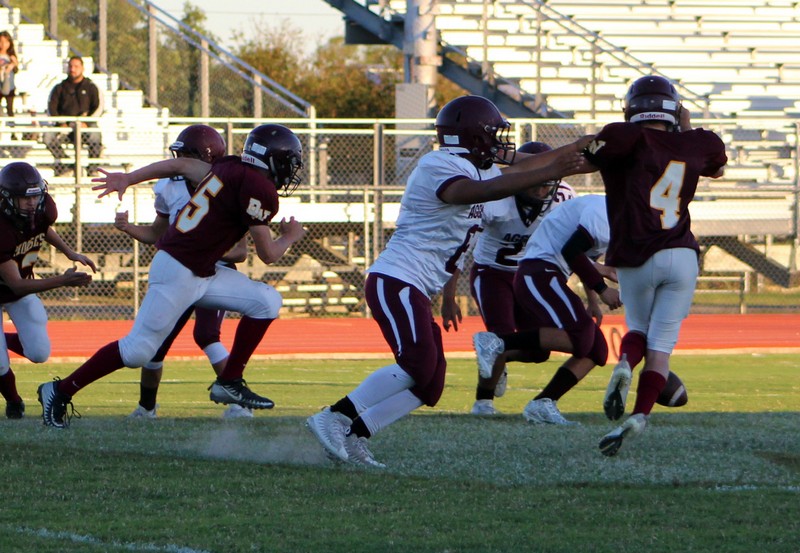 The Devine freshman team faced Poteet’s JV squad on Thursday, November 1st and walked off the football field with an impressive 32 to 0 victory. Devine closes out its 2018 season on the road in Carrizo Springs Thursday at 6pm.
“I was proud of our boy’s effort and performance,” stated Coach Bart Oropeza. “We constantly preach to them about giving a 100% effort on every play and that night I have to say that we came pretty close to reaching that 100% goal.
Zack Nowicki scored our first and second touchdowns. Xavier Contreras had three rushing touchdowns for the night. Brady Hackebeil scored our only 2-point conversion for the game. Peyton Carr and Zachery Rico picked up some good yards caring the football and Jaden West and Riley Barton each had one reception for the night.”
According to defensive signal caller Coach Juan Gonzales, the defense played “their best game of the year Thursday night. They flew to the football and made plays when needed. Zach Nowicki had a big game defensively for the Horses.
Zach caused one fumble and had two fumble recoveries (one from an onside kick) along with multiple tackles. Jeremy Casillas and Outlaw Walker both had a fumble recovery during the game.
Brady Hackebeil had one interception to end the 2nd quarter and one caused fumble earlier in the game. Joey Blanquiz had one caused fumble as well. Payton Carr played great man-to-man defense with multiple pass break ups; one being on a 4th down conversion try by Poteet.
I am very proud of how the boys played Thursday night. They played as a team and played with intensity…They played Warhorse Football!”
By Jerel Beaty
Staff Writer