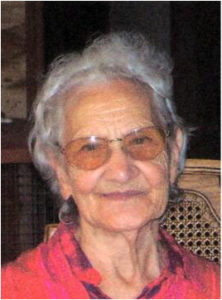 Violet Meta Weidner Wolfshohl, passed away on June 18, 2017 in Hondo at the age of 97 years.
Violet was born November 27, 1919 in Anhalt, TX, one of six children born to Otto and Meta Rust Weidner. In 1941 she graduated from New Braunfels High School. On March 31, 1947, Violet married Alfred Ernst Wolfshohl in San Antonio. They were married for over 39 years at the time of his death on January 17, 1987. Together they raised two sons and two daughters.
Violet was preceded in death by her parents; husband; brothers, Oswald Weidner, Claude Weidner and Lee Weidner; sister, Pearl Rahe; grandchildren, Oscar and David Davila.
Survivors include her sons, Edwin (Margaret) Wolfshohl and Brian Wolfshohl, all of Mico; daughters, Patricia Davila (Gilbert Ornelas) of Moore and Sherri Wolfshohl of San Antonio; grandchildren, Brett (Jeannie) Lucas, Loretta (Erik) Armstrong, Elias (Valerie) Davila and Jason (Danielle) Ornelas; 10 great-grandchildren; sister, Gloria Voges of New Braunfels; as well as numerous nieces, nephews and other relatives.
Visitation will be Thursday, June 22, 2017 from 4:00 pm to 8:00 pm at Tondre-Guinn Funeral Home. The Funeral Service will be at 10:00 am at Tondre-Guinn Funeral Home on Friday, June 23, 2017. Interment will follow at Hondo Cemetery.
Memorials may be made in Violet’s memory to the Humane Society, Wildlife Refuge or the charity of your choice.
Arrangements by Tondre-Guinn Funeral Home.