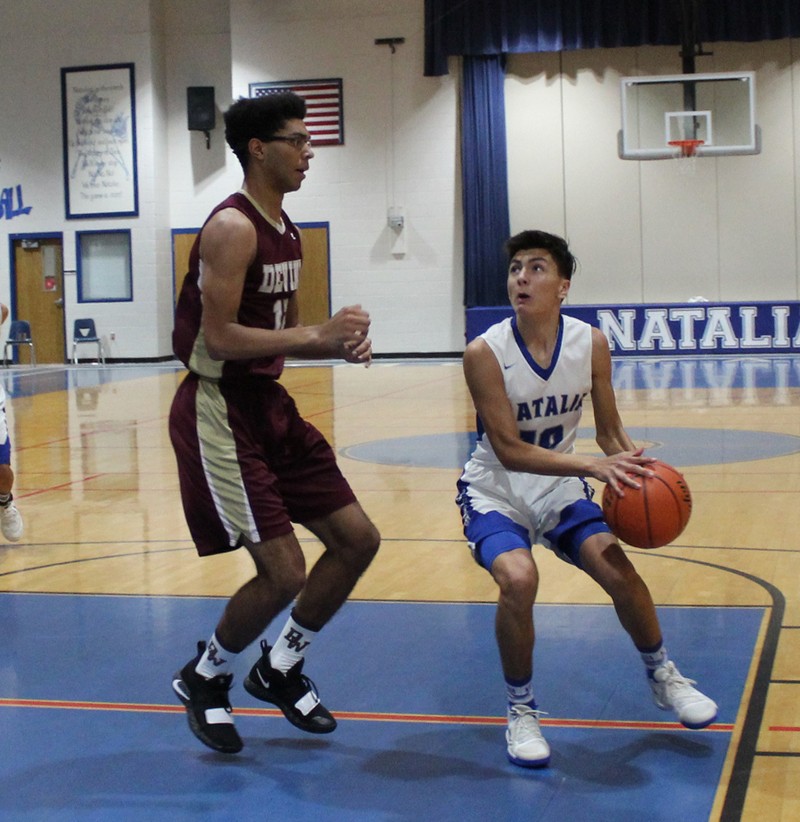 A program is not built or turned around over night and as a result, the Natalia Varsity Mustangs are off to a 0-5 start to their 2018-2019 season. The boys in blue began their season with a tough blow-out loss to neighboring Devine, before dropping four straight on the road in Frio County last weekend.
“Overall, we are off to a 0-5 start, but we have started to build some confidence throughout the Pearsall Tournament last weekend,” 1st year Natalia Head Coach Justin Welsh said. “The kids are starting to understand the value of a possession and understand the importance of not turning the ball over.”
Devine Game
Turnovers and youthful mistakes have proven to be the difference thus far and that was the case at home versus the Devine Warhorses. When you add turnovers and mistakes to ice cold shooting (20.8%), it turned into a 72-30 loss at home versus the Maroon and Gold.
“Devine jumped on us early as they were able to force us into costly turnovers which allowed for easy transition points,” Welsh said. “We were able to move the ball a little better in the second half and had some better looks.”
Devine jumped out ahead of the Mustangs 21-5 in the 1st quarter and never looked back. Natalia’s lone double digit offensive production came in the 3rd quarter as Devine edged Natalia 12-11 in scoring.
The Stangs finished with 19 turnovers as the Horses finished with 10.
Scoring Leaders- Matt Contreras 14, Daniel Ramirez 6, JimmyRay Gutierrez 3, Fabian Ruiz 3.
Pearsall Tournament
Cotulla
Cold shooting continued in the Pearsall Tournament, as the Stangs shot just 13.2% in the tourney opener versus district foe Cotulla. The Cowboys jumped on Natalia 23-2 in the opening quarter which allowed for a 36-9 lead at the half.
In the second half, Natalia couldn’t put anything together as they suffered a tough 79-25 set-back. Turnovers continued to prove costly, as the Stangs suffered 30.
“Cotulla came out with more intensity than us and it showed,” Welsh said. “They jumped on us early and took us out of rhythm. They were good defensively which allowed 42 transition points. We have to do a better job of taking care of the basketball.”
Scoring Leaders- Contreras 7, Ruiz 5, Ramirez 3.
SA Lee Academy
The Mustangs met a traditionally talented Lee Academy ball club in their second pool game of the tournament. Natalia gave a better effort on both ends of the court, as their shooting % improved to 32.5, although turnovers continued to be a problem with 24 in the game.
Natalia battled hard early, as they trailed 21-11 after one before going into the half down 35-17.
In the second half, Natalia out-scored Lee 12-9 before being edged in the 4th 10-7 resulting in a 54-36 loss.
“We came out with much more intensity against Lee and it allowed us to settle into the game a little more,” Welsh said. “They are a talented team with good guard play and some solid post play inside. We also did a good job defensively, forcing Lee into 16 turnovers allowing us to get some better looks offensively.”
Scoring Leaders- Contreras 10, Ramirez 8, Chris Suarez 6, Xavier Vasquez 4.
Pearsall
The final pool game of the tournament was against host Pearsall. Natalia continued to improve their shooting %, as they finished this pool game shooting 40% from the field which allowed even more success on both ends of the court. Unfortunately, the turnover bug didn’t improve as they finished with 29 turnovers compared to 23 by the Mavs.
Pearsall came out and jumped on the Stangs outscoring them 17-7 in the 1st quarter, before taking a 32-13 lead into the half.
In the second half, Natalia did a better job on both ends of the court resulting in a 15-14 edge in the 3rd and an 11-8 in the 4th. Unfortunately, that was not enough to turn the tide as they fell 54-39.
“We started to build a little confidence after the Lee game and battled a tough Pearsall squad,” Welsh said. “We were able to get some good looks and finished with 40% shooting which is the season high thus far.”
Poth
Natalia battled former district foe Poth in their lone bracket game of the tournament. Poth was able to use their size to their advantage on both ends of the court, as they forced Natalia into 31 turnovers. The Stangs also struggled on the offensive end as they shot 25.6% resulting in a tourney ending 51-28 loss.
“Our kids came out and battled from the very beginning against a very big Poth team,” Welsh said. “Poth is always well coached and usually has some good shooters and big men inside and this year was no different. We were able to keep it close early, but turnovers would once again be the nemesis as it allowed them too many opportunities.”
On the positive side of things, Natalia did out-rebound the Pirates and Coach Welsh credited Daniel Ramirez and Fabian Ruiz for their efforts inside.
Scoring Leaders- Contreras 10, Ruiz 9, Juelian Armendariz 4.
“We will continue to work hard as we prepare for district,” Welsh said.
Upcoming Games
Natalia’s game versus Leakey on press night was canceled due to the Eagles still being in the state playoffs for six-man football.
This weekend, Natalia travels to Sabinal for a two day tournament. See the tourney story for further details.
Natalia will travel to Atascosa County on Tuesday, December 11th to face the high flying Pleasanton Eagles (8-1) in a non-district battle at 5:00 and 6:15 p.m.
By Eric Smith