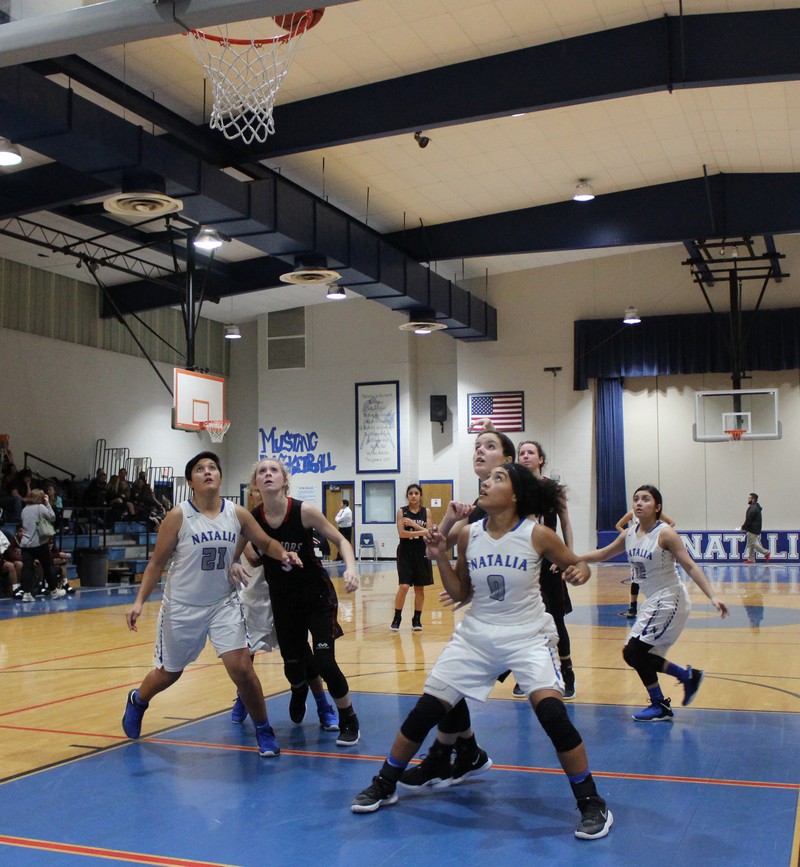 The Natalia Varsity Lady Mustangs (4-5) started off their week of action with a big home win versus the Ingram Lady Warriors. The girls in blue then traveled to Frio County for the weekend where they competed in four competitive games where they were able to finish 1-3 on the weekend of action.
“Overall, it was a great week for Natalia Lady Mustang Basketball,” Coach Doug Lum said. ‘We are starting to see some really good things happen. We grew together as a team and showed tremendous mental toughness. Our kids are dedicated to the process and care about each other and their team.”
Ingram
The Natalia Lady Mustangs had a successful night on the hardwood offensively during their battle versus Ingram. After opening up the game with a 14-6 advantage after the 1st quarter, Natalia took a 26-14 lead into the half.
In the second half, the girls in blue out-scored the Lady Warriors 15-13 in the 3rd quarter en route to a 51-32 victory.
Scoring Leaders- Destiny Zapata 14, Raven Sanchez 9, Zita Perez 9, Mariah Joseph 8, Jelli Padilla 5, Sam Stallworth 4.
“The girls came out with great intensity in this game,” Coach Lum said. “There was a good atmosphere in the gym and we moved the ball really well and got good shots. We also rebounded and blocked out well.”
Pearsall Tournament
Carrizo Springs
The Lady Mustangs opened the tournament against the Carrizo Springs Lady Cats. The girls in blue were able to knock off Carrizo Springs 44-38.
“We jumped on them early and were able to hold on to the win,” Lum said. “We hit free throws when we needed to down the stretch.”
Scoring leaders- Perez 19, Stallworth 14.
Mathis
Traditionally tough Mathis awaited Natalia in the second pool game of the tournament. The Lady Pirates were able to suffocate Natalia with stellar defense en route to a 52-18 win over the Lady Mustangs.
“Mathis was really tough defensively and we couldn’t get anything going,” Lum said.
Scoring Leaders- Perez 6, Zapata 4.
Stockdale- Natalia faced the Stockdale Lady Brahmas in the final pool game of the tourney. Natalia lost a heart-breaker, as missed free throws down the stretch proved costly in a 34-32 loss.
“This was a tough one,” Lum said. “It was a great learning experience as we had multiple opportunities to put the game away at the free throw line in the 4th and couldn’t connect.”
Stockdale hit a shot with seven seconds left to secure the 34-32 win.
Scoring leaders- Perez 9, Sanchez 7, Padilla 5.
Pearsall
Eventual tourney champion Pearsall, was the first bracket team Natalia faced immediately following the Stockdale game. The girls in blue came out strong and were able to take a 21-16 lead into the half.
Unfortunately, Pearsall rallied back to defeat Natalia 46-28.
“I was worried that the emotional loss would carry over to this game,” Lum said. “Our kids came out and played their hearts out. We weren’t able to sustain the level of play throughout the second half against a very tough Pearsall team.”
Scoring leaders- Stallworth 9, Perez 6, Padilla 5, Sanchez 5.
Upcoming Games
Natalia traveled to Leakey on press night to face the Lady Eagles. This weekend, they travel to Uvalde County to the Sabinal Tournament. See the tourney story for game details.
On Tuesday, December 11th the St. Anthony Lady Jackets come to town for a 5:00 p.m. JV and a 6:30 p.m. Varsity contest.
By Eric Smith