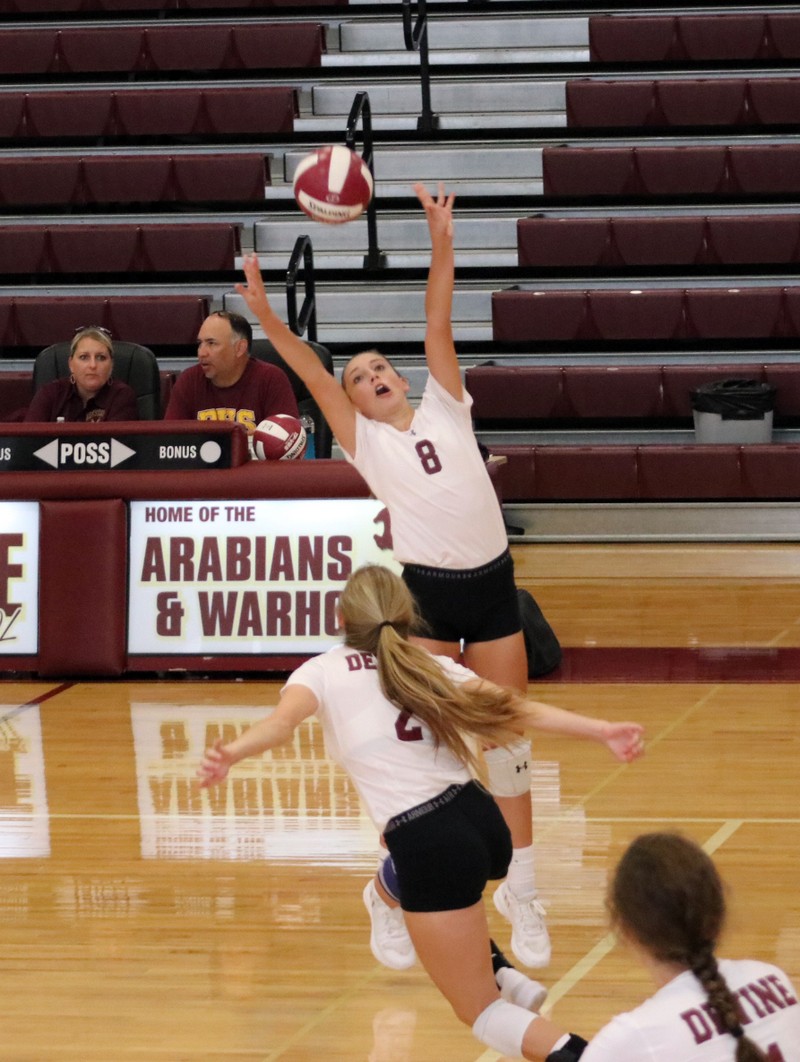 The Varsity Arabians faced La Vernia last Tuesday night and it was a tough loss 0-3. The first set ended 11-25 with missed opportunities but they turned it around in the second set. The Arabians moved quicker and were more aggressive on the ball but couldn’t finish the point. Even with the better communication and ball handling, the Arabians fell short at 19-25. The third set was much the same at 20-25 but the Arabians never gave up and kept fighting for every point. “We just didn’t make the plays at the ends of the sets. But there were a lot of good things that happened tonight” said Coach Leigh Anne McIver.
The Arabians learned from every play and will use this match as an opportunity for growth before district starting on September 21st. Sierra Pompa had 2 aces, Sara Moreno 1, and Gabby Rodriguez 1 ace. Megan Runyan 4 kills, Macey Hein 3, Alissa Stehle 1, Dana Aaron 2, and Pompa 12 kills. Hein had 20 assists. Runyan had 1 block. Pompa 8 digs, Aaron 2, Stehle 10, Moreno 8, Kaylee Howard 1, Rodriguez 20, Hein 3, Runyan 3, and Madison Pike 2 digs. The team had 5 errors.
Friday night the Arabians faced Antonian and after three sets, the Apaches came out on top. With set scores of 15-25, 7-25, and 12-25, the Arabians were not able to get the offensive streaks the needed to win the game. “We did a good job on defense but we could not get going on offense. We did not attack the ball well and that was why we could not score points,” said Coach Leigh Anne McIver.
Pompa had 2 aces and Howard had 1. Runyan had 1 kill, Hein 3, Stehle 1, Aaron 1, and Pompa 6 kills. Stehle 3 assists, Rodriguez 1, and Hein 5. Aaron and Pompa each had a block while Rodriguez had 11 digs, Pompa 8, Stehle 4, Moreno 8, Howard 3, Hein 5, Runyan 1 and Pike 1 dig. The team had 5 errors.
Coming up for the Arabians is September 14th at Fredericksburg, Cole the 18th (Home), and then their first district game at Carrizo Springs on the 21st.
By Dicy Chambers
Sports Writer