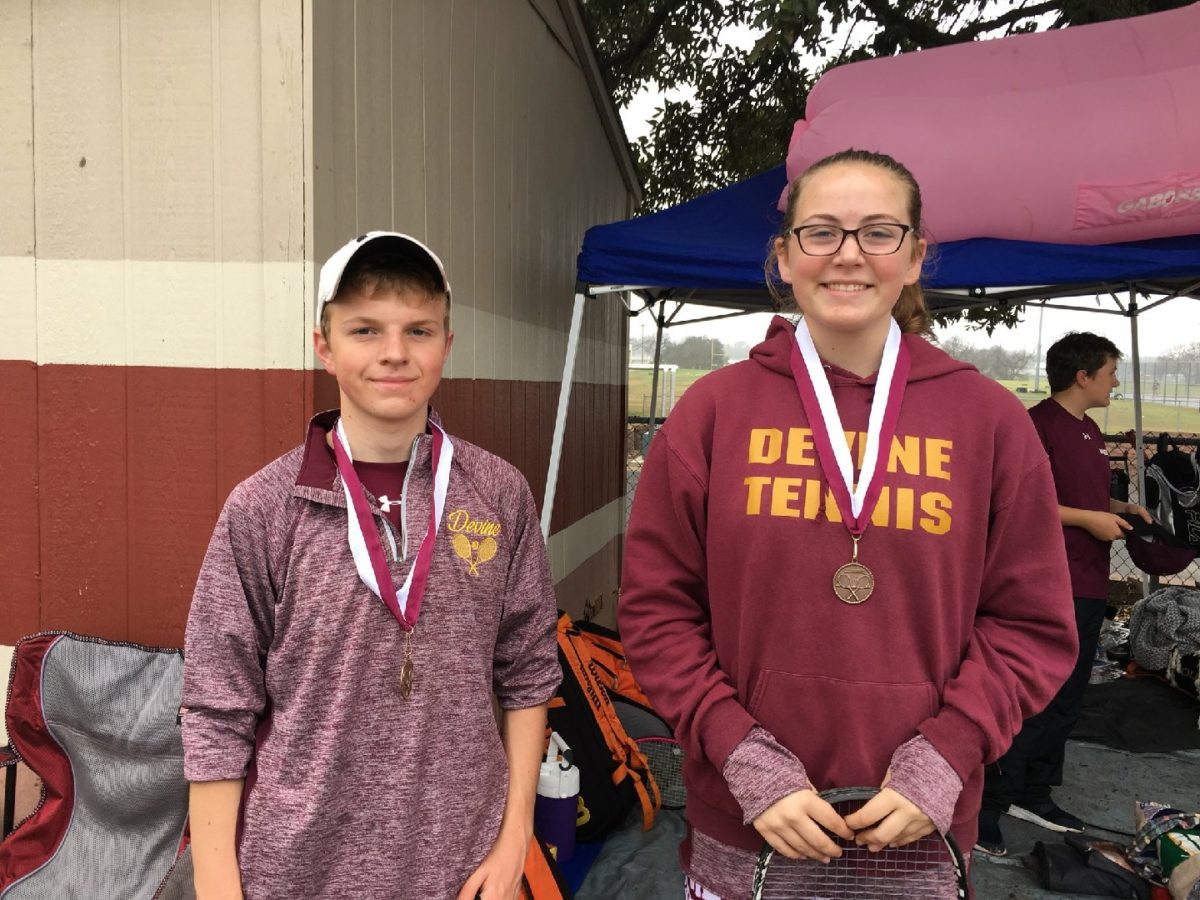 Once again, the misty rainy weather kept the Varsity Devine Tennis Team from completing their final matches.
Many of our players played very hard to earn their way into the Semi-final matches. Both Girls Singles players, Lindsey Spannagel and Brooke Runyan won three straight matches and had a very good chance to play in the finals and bring back a couple of medals.
Girls Doubles teams of Chloe Serafin/Malvin Flores and Lydia Zapata/Scarlett Smith were also scheduled to play in the Semi-finals match. We were hoping to grab a few gold medals in these brackets as well.
Boys Singles Jake Harrell and Ralph Rios each won three straight matches, giving them a trip to the Semi-finals, too. Both of these Warhorses have not been able to finish a tournament in three weeks due to the misty rainy conditions. We were so looking forward to winning a couple of medals this weekend.
Warhorses Mason Zenon/Caeden Alvarez had a bye for their first match, lost their next match to a very tough Ingram team, then won their third match and would have been playing for 9th place.
Warhorse Freshmen duo Jacob Barron/DJ Dzeirzanowski lost their first match to a talented Boerne HS doubles team, which placed them in the Consolation bracket. These lucky two did get a chance to play on Saturday morning and won Consolation in the #2 Boys Doubles bracket. Congrats!
The Mixed doubles teams had a successful weekend. Preslee Quisenberry/Toby Ramos paired up for the first time. It was very exciting to beat Boerne HS in the quarter-finals match in order to advance to the semi-finals. Once again, they never had a chance to play for a medal due to the slippery courts.

Freshmen Laurel Spannagel/Denton Zuercher began the tournament with a close match against Hondo, but lost 6-8. They won the next three matches to win the Consolation Medals for Mixed Doubles #2 bracket.
Some of our JV were allowed to enter the tournament, even though it was for varsity teams. They all got to play four matches to give them some playing time and much needed experience: Connor Radicke/Peter Valerio played in the Boys Doubles, Madi Mohr/Bella Elias and JoJo Villanueva/Caitlyn Breiten played Girls Doubles. These JV players toughed it out and represented Devine well.
“All of our athletes are improving with each match. We are a young team and I am very proud of our Freshmen whom have stepped up to fill these varsity spots. I know they will continue to work hard and make improvements each week. “ We will return to Uvalde again this week. Hoping the weather will let us finish!