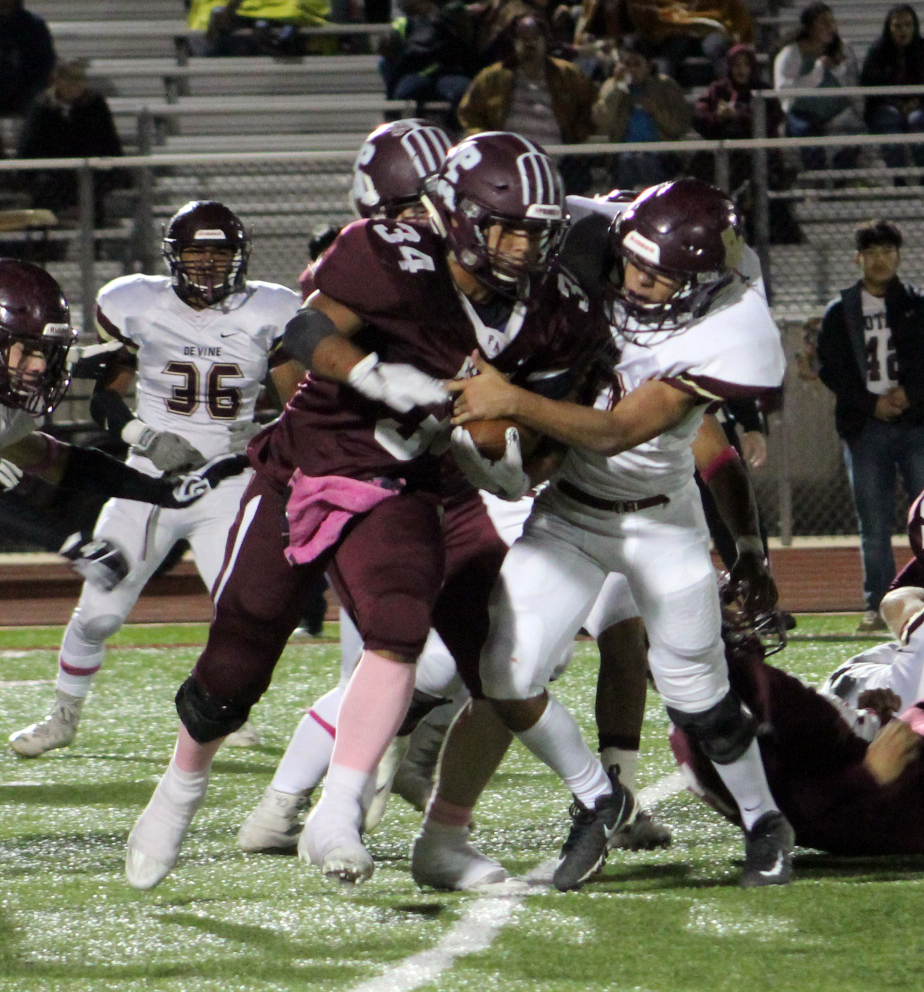 The 8 and 0 Pearsall Mavericks, with more than likely their entire community, will march into Warhorse Stadium Friday night with aspirations of clinching the outright District 14-4A championship. The Warhorses look to earn at least a share of the district title by not permitting the Mavericks to walk of the stadium grass as the victor. Kickoff is set for 7:30pm.
Pearsall is 3-0 in district competition just as Devine is. The Mavericks are coming off a huge overtime comeback win against Crystal City last Friday night after the Javelinas held an 18-3 advantage at halftime. Pearsall shut out Crystal City in the 3rd, 4th, and OT periods while scoring two touchdowns and kicking the game-winning field goal in the extra frame from 38-yards out.
Devine Head Coach Paul Gomez on the Mavericks, “Pearsall has a talented and well coached team year in and year out. They just finished winning a big ballgame in overtime against Crystal City so their confidence is high coming in to this ballgame. Coach Silva and his staff do a great job over there and we have nothing but respect for them.”
Pearsall defeated San Antonio Burbank, San Antonio Memorial, Blanco, Mathis, and Jourdanton in their pre-district schedule while topping Poteet, Lytle, and Crystal City inside the division.
“They are undefeated coming in to this ballgame and I expect them to be running on all cylinders Friday at Warhorse Stadium,” continued Gomez. “They have speed and quickness on offense and they execute their game plan very well.”
Five running backs have carried the load for the Maverick’s rushing game. Leading the way is Oscar Cubriel with 87 rushes for 755 yards and 11 touchdowns. Javier Martinez (45 for 325, 5 touchdowns), Nathaniel Gandara (83 for 322), Manuel Ramos (46 for 216, 3 touchdowns), and Meme Cuevas (24 for 87, 2 touchdowns) have accounted for a majority of the remaining carries, yards, and touchdowns.
Pearsall does not rely on its passing game often, but when they do Gandara has completed 50% of his pass attempts this season connecting 28 of 56 times for 582 yards, 5 touchdowns, and 8 interceptions. Cubriel (9 for 197, 1 touchdown), Robert Maldonado (6 for 187, 4 touchdowns), and Cuevas (3 for 110, 1 touchdown) are Gandara’s main targets.
The Warhorse offense will have to be sharp to Friday night in order to put points on the board. According to Gomez, “They are very good defensively; that is their strength. They have a stingy defense led by linebackers Jacob Youngblood and Carson Neal. We will definitely have our work cut out for us.”
Devine community, each and every one of you are needed in full force Friday night at Warhorse Stadium. The entire town of Pearsall will invade Devine with hopes of pulling out of town with a District Championship in tow. We need to rally around our Warhorse players by marooning out the stadium and being vocal supporters throughout the entirety of the ballgame. With a Devine win, the Warhorses clinch a share of their fourth consecutive district championship making it the first time that feat would have been accomplished in 97 years of Devine football. Be proud, be loud!!!
“Our team will be focused and we will have a great week of practice,” finished Gomez. “I expect us to go out there on Friday night to battle for at least a share of the District championship. Our boys will be up for the challenge. What a great opportunity! It will be a playoff atmosphere here on Friday night so it will be exciting! To go against the best team in the district to see where we stand is how our players should want it. That is what football is all about!”
By Jerel Beaty
Staff Writer