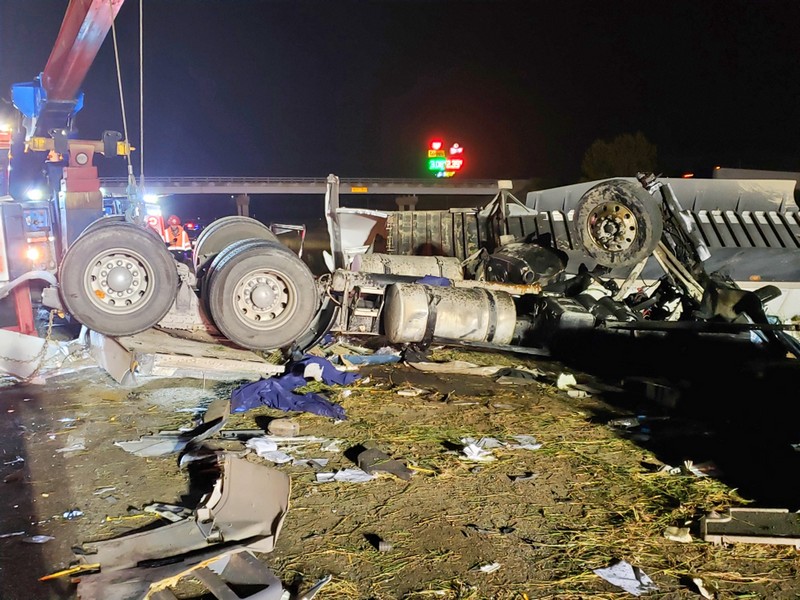 Emergency responders got the 9-1-1 call around 5:15 on Thursday, November 8 for a horrible accident in which two drivers lost their lives, passing away at the scene in one of the worst accidents Chief Gilbert Rodriguez has seen in all his 30 years of being a first responder. 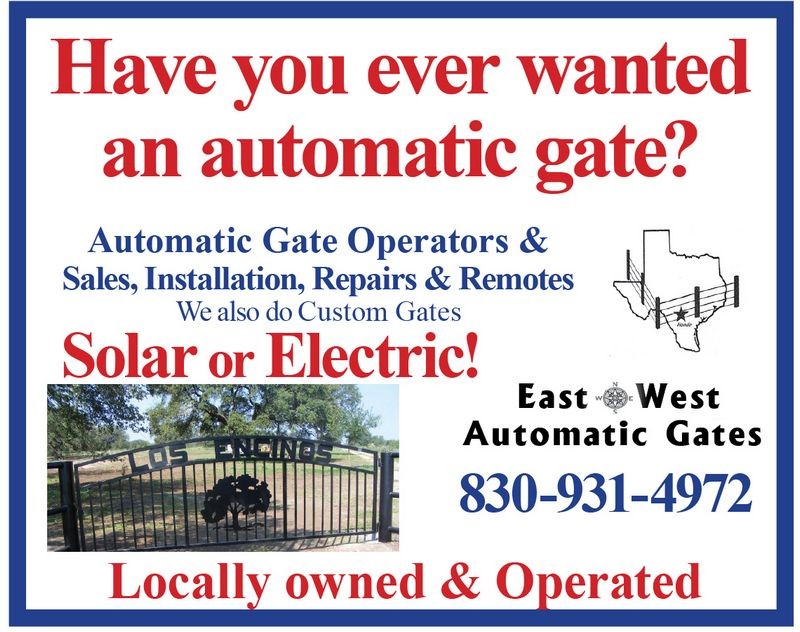 Crews worked over twelve hours to clean up debris covering the scene.
“There were people all over the place trying to help,” said Chief Rodriguez. “It was a chaotic scene….I’ve been to a lot of wrecks in my years as a firefighter and in law enforcement and this was one of the worst. It compares only to one other wreck that I remember. There was so much that I’ve never experienced before, never seen. The truck that came across the median was so severely damaged that the cab was completely severed from the frame…There was a diesel engine just sitting on the road on the main thoroughfare of I-35. ”
According to Chief Rodriguez, “An 18 wheeler driven by 50-year-old Enrique Lara III, of Laredo, was heading south on I-35 and wound up crossing the median and entering the I-35 northbound side, striking another 18 wheeler head-on. The northbound 18-wheeler was driven by 54-year-old Nazario Rivera, of Austin.” Both drivers sadly passed away at the scene.
So many people stopped to help, but there was little they could do as the driver of the southbound 18 wheeler was ejected and entrapped beneath debris at the solemn scene, and the driver of the northbound 18 wheeler was pinned inside his vehicle.

“The northbound 18-wheeler was in the left lane. In the right lane beside it, there was an F-350 pickup truck pulling a trailer with another truck on top of it. The 18-wheelers collided with the rear bumper of his truck, but had lost most of the momentum by the time they collided with the third truck. The driver of the pickup was extremely lucky, walking away with no injuries.”
As for the cause of the accident and what actually resulted in the 18-wheeler plunging across the median, Chief Rodriguez stated, “DPS is still doing an inspection, so our investigation is ongoing.”
Scott Alexander, of Devine, witnessed the horrible accident. He was just a few trucks behind the 18-wheeler that reportedly lost control after a blowout, according to Alexander, though law enforcement has not confirmed this to be the cause. 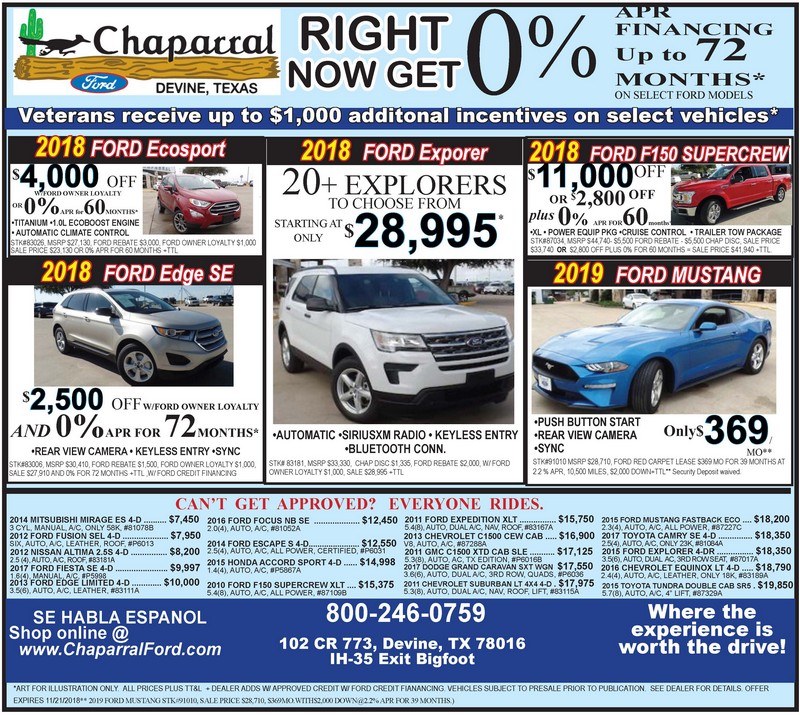 “I was heading southbound on I-35 around 5:15 pm when the semi truck a few vehicles in front of me, lost his steer tire on his driver side. He lost control and immediately shot over into the median causing him to roll his truck onto its side and slide into the oncoming traffic of the North bound lanes,” Alexander said. “The semi truck traveling northbound struck the semi as well as the vehicle traveling beside him. Several people as well as myself stopped to render aide, but unfortunately, there was nothing that we could’ve done. One driver was trapped under the frame of his truck and the other was trapped inside his cab. I’ve witnessed accidents before but nothing like this. This was by far the worst thing that I’ve ever seen.”
Leslie (Boyd) Vail, of Devine, was also traveling on I-35 that evening.
“There was so much rubble everywhere, I couldn’t even tell which pieces went to which vehicles,” Vail said.
Accidents like these really make us stop and think, and Vail couldn’t have said it any better when she commented, “We drive around non-stop, thinking I’m just running an errand, but so much can happen between there and home.”
Vail and her husband were headed home on I-35 south, driving up on the accident to find a cloud of smoke.
“All of a sudden we saw a cloud of smoke right ahead of us,” said Leslie Vail. “We were trying to depict if it was a median fire or wreck and as the smoke was clearing I could see tires and knew it was a wreck… We saw so many people jumping out of their vehicles to assist. The engine to the 18-wheeler was completely on its own in the middle of the road, separated from the truck….”
“It was by far the worst wreck I have ever seen in my life and I immediately prayed for everyone, including those assisting because cars were not slowing down as they arrived to the scene. One man even had to drive down half a mile to get drivers attention and slow people down…..It’s crazy how so many wrecks always happen in that same spot between Natalia and the rest stop.”
Vail adds, “It was amazing to see so many people jumping out of their vehicles, coming together and not hesitating to help others in their time of need.”
First responders were on scene for over twelve hours from 5:15 in the evening until the interstate opened back up around 7:00 am the next morning. A couple local restaurants were kind enough to give volunteer firemen and first responders some relief by delivering dinner and refreshments.
“They didn’t do it for the recognition but they deserve some,” said one volunteer fireman, commenting on social media. “Once there, no one could leave. There’s no ‘go get food’ or bathroom breaks. Most of the people on scene were volunteer firefighters who were heading home to dinner from their day jobs when the accident happened. Somewhere around 2100, food and drinks arrived. A box of Subway sandwiches, lots of coffee, and some fresh baked cookies. It just showed up by the kindness of people there in Natalia.” 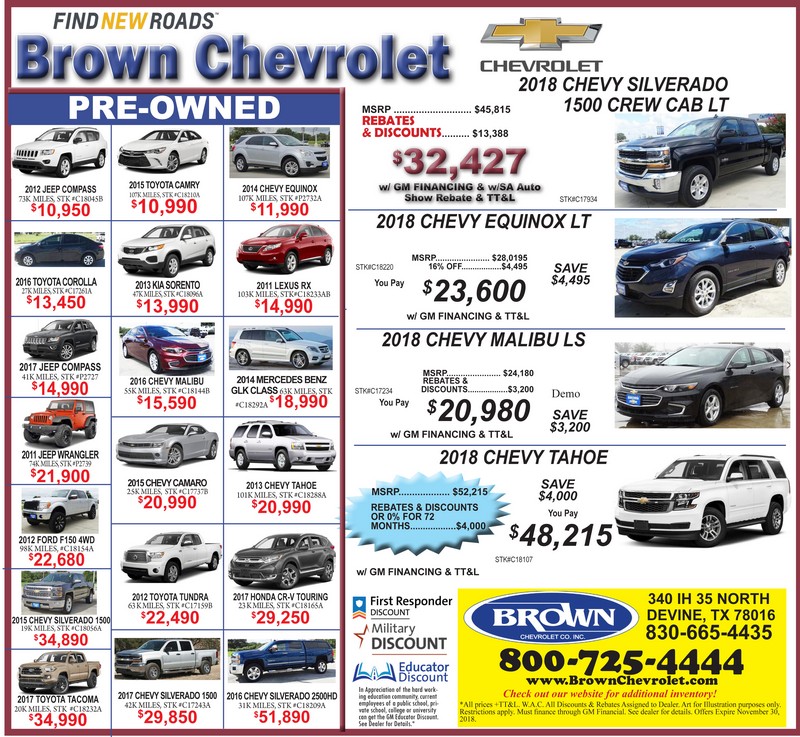