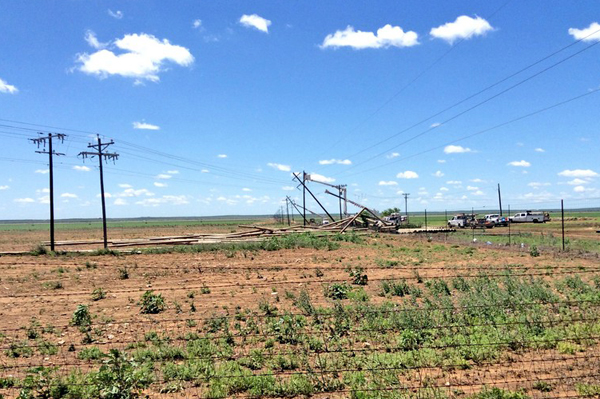 Bright and early Thursday morning, Medina Electric Cooperative reached out to customers about the wind and storm damages that impacted the Moore, Bigfoot, Cotulla, Dilley, Pearsall, Hondo, Uvalde, Yancey, Frio Town, Batesville and surrounding areas. They let customers know that some outages would likely last all day as multiple power poles and lines were taken down in a suspected tornado.
At that time they stated, “Most outages are in Frio Town and Dilley, which appear to be the worst hit parts of the area. Our electric system has sustained damages and we have gotten reports of a possible tornado in some areas. At this time, much of our communication and mapping equipment is not working because of damage to towers and other equipment sustained during the storm.”
STEC, which is MEC’s wholesale power provider had several poles down in the areas that were worst hit. There were 10 poles down in Dilley, and two STEC poles in Frio Town, which were transmission poles so that was why the outage lasted longer in that area.
By 5 pm, crews who had been working hard all day were able to restore power to most customers.
“It was either very strong, straightline winds or a small tornado based on the damage our crews saw,” a MEC representative said.