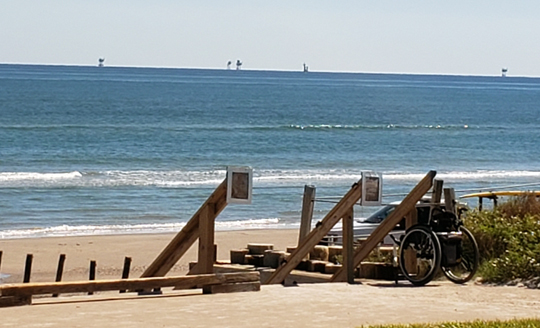 While vacationing on the North Padre coast, we had the pleasure of meeting a young man named Eden Stewart, of Lampasas. He doesn’t live around here anymore, but we are sure that his story will be an inspiration to anyone who reads it.
Sitting on the beach this weekend, we watched the swimmers braving the cold temps, and there was one particular guy who swam way out around the 3rd or 4th sandbar and stayed out there for what seemed like hours, floating in the waves. We didn’t know it then, but that young man was Eden Stewart. “How can anyone swim that far out and stay out there that long?” we thought to ourselves, knowing it must take enormous arm strength and skill. Before we went back up to the condo, we noticed this young man coming back to shore, and we soon discovered his arms and willpower were even a lot stronger than we imagined. This young man was paralyzed from the knees down.
We watched in awe as he sat down and propelled himself backwards all the way across the shore and then climbed the huge concrete steps 12 foot up to the top of the sidewalk, where he had left his wheelchair behind, sitting on the sea wall. Completely on his own. Completely awesome.
It wasn’t long before my little 3 year old Tucker, sat down and tried to move around the same way Eden did. He wasn’t being ugly, he just thought to himself “Hmm, I wonder if I can do that”—for we all had a hard time coming up and down those enormous stairs that are made of giant concrete blocks. Each stair is probably 2 feet tall.
The next day, we were sitting on the sea wall and we saw Eden again. He hopped right out of his wheelchair, went down the steps, and across the shore, swimming far out into the sea, farther than I ever could.
By the time Eden came back up, we were sitting on the shore with my son playing in the sand, and I couldn’t help but to stop and tell him what an inspiration he was to everyone on that beach. We soon got to talking about doing this article.
He shared his story, and I’m glad to be able to share it with you now. 20-year-old Eden Stewart, of Lampasas, was born with Spina Bifida. He has used a wheelchair since he was 3 years old. He never really learned to walk, and he never let that slow him down.
“I know people who are worse off, and I know people who are better off,” he said. “I am really very blessed. I know others with Spina Bifida that can’t move their arms. When you are born with Spina Bifida there’s a lesion on your back, and where that lesion is determines how much of your body it affects. Mine is pretty far down, so my paralysis is mainly below my knees down. I’m not gonna lie, I have my days just like anyone else though,” he said with an infectious smile.

If someone asks his advice, he’d say “First of all, realize you’ll have bad days, that’s normal, but don’t ignore it. Secondly, find other people with similar struggles that can relate to you—people who have walked in your shoes so to speak. Especially people who have walked in your shoes for a lot longer than you have. They have an amazon of advice and tips, and why repeat the same mistakes? Also just for the camaraderie.”
“A lot of things aren’t actually as challenging as they seem. Don’t automatically assume you can’t do things,” Stewart said. “Five years ago, I wouldn’t have even thought about doing some of the things I do today. Transferring myself out of a wheelchair, or getting into a car, or driving a car, for example. At that point in my life, I was grateful for all the help I was receiving, but one day I said ‘Let me see what I can do.”
“If you can’t do something, then so be it. But you’ll never know if you don’t try,” he adds.
Turns out, he says, “You can do anything you set your mind to, but it’s important to know your limits too. I am the first one to raise my hand and because I’m guilty of this. If you tell me I cannot do something—I can guarantee you I’m gonna at least attempt to try it,” he said with a laugh.
If you have a disability, whatever it may be, don’t be afraid to step out of your comfort zone or try something new, he adds.
“There were certain things like driving, that I really didn’t have any ambition to do, but my mom encouraged me to get my license and learn to drive, and I am really happy I learned to do it. I have a modified car so I can drive using my hands too. Now I can get out of my wheelchair, load it up in the car, and go wherever I want to go,” Stewart said. “It’s all about determination.”
Along with swimming, he also loves playing basketball, fishing, playing piano, working out at the gym, and playing catch. Eden is currently attending Sunset International Bible Institute online, and hopes to transfer to college in San Antonio area soon. His goal is to be a therapist/counselor someday.
“Another thing I’d say is, if you see someone like me, don’t be afraid to strike up a conversation and ask questions. I’ve never been offended by anyone’s questions,” he said with a smile. “I never met a stranger.”
“Some people have lost their ability to walk, but I never had it,” he adds, “So the way I move around on my arms and hands just comes second nature, just like walking is to you.”