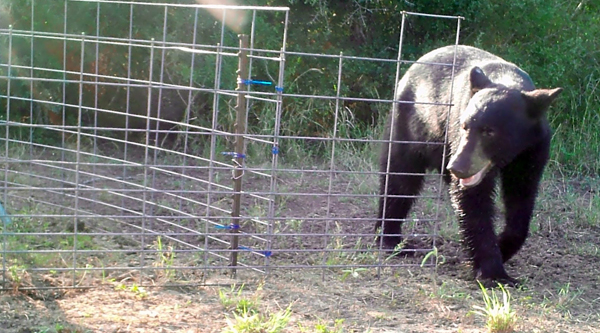 One South Texas rancher got the surprise of his life as he checked his game camera last week. Jesus Cadena is the 4th generation owner of the family ranch located less than 5 miles outside the community of Benavides. The 100-acre low-fence ranch has been in the family for well over a hundred years since his great-grandfather Liborio Cadena came to Duval County in the early 1900’s, and it was passed down through the generations.
“This was a first for me….I’ve seen a lot of animals on that camera, but never a bear!” said Jesus Cadena Jr in an interview this Monday. “And then when I looked at that game camera and saw the October 20th date– I was like wait a minute–I was right there in that deer blind that same day, about thirty minutes after the bear had come through. The camera caught the bear at 5:02, and I was up in that ladder deer blind around 5:30 with my bow. It’s a good thing that bear didn’t walk out while I was up there in that blind because I wouldn’t have known what to do. I might have shot it, and it turns out they are a protected species, and there’s a big fine for that.”

The following information about Black Bears was also published by TPWD:
From the Big Bend to Austin, bear sightings have surprised biologists and the public alike. On the other hand, at least one sighting per year of Black Bears in the Hill Country is not uncommon. These individuals may be truly wild animals looking for suitable habitat or mates, but it is entirely possible that they are released or escaped captive animals. In any case, the chances of a recently established population of Black Bears in the Hill Country are remote. Central Texans are probably seeing wandering individuals from farther west.
Black Bears are not as dangerous as some people think. For one thing, most of their diet is vegetation, so they may pose less of a threat to livestock than some other predators. And like most animals, they will seldom approach people.
The Black Bear, Ursus americanus, is on the state endangered species list. TPWD biologists encourage people to report recent bear sightings to Texas Parks and Wildlife Department. Research is currently underway by the Texas Parks and Wildlife Department to determine the status of Black Bears in Texas. A study is also underway in East Texas to determine habitat suitability in that part of the state.