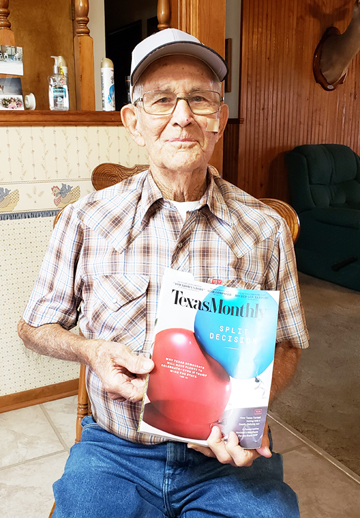 Texas Monthly recently contacted longtime resident, Louis Ehlinger of Devine, who is the oldest living survivor of a huge explosion that rocked San Antonio in 1963 while crews were working transport, dismantle, and destroy old Cold War weaponry such as “Mark-7 Nuclear Warheads”. The explosion made National News, but it quickly dissipated. The new Texas Monthly article which interviewed Ehlinger and other crew members is titled “We Thought World War III Had Started.”

The reporter contacted Ehlinger’s niece, Nancy Saathoff, to set up the interview months ago.
“This was National news, but soon after it happened, Presidents Kennedy was assassinated, and so the coverage shifted to that,” noting that Ehlinger and the other two witnesses’ interviews with some major national publications about the bomb were then cancelled.
After moving home to Devine in 1961, Louis began working at Medina Base in San Antonio. He was part of the “Handling Crew” who moved bombs from the huge concrete igloo bunkers that were covered with dirt on top to other areas for checks, repairs, and destruction of the HE (high explosives) in the bombs.
As related by Louis’ niece, Nancy Ehlinger Saathoff, “According to an article in the San Antonio Express News from July 4, 2015, their job – then Top Secret – was to dismantle Cold War weaponry and to either burn the nonnuclear components or store the explosives in 90 igloos there that were designed to force any blasts downward.”
Clearly, this was a dangerous job, of which Louis had no idea when he began. But, on November 14, 1963, luck was again with Louis and his two crew members who escaped an explosion in an igloo that blew up a huge blast of smoke cloud high in the sky, and a hole 30 feet deep!
In a 2017 interview with us Louis recalled, “We heard a loud pop like a .22 shot in the igloo, and I took off running, hollering to the guy outside to ‘Run, Run, Run!’ I ran about a hundred yards to the road and looked back as the igloo rose up and went down. I dove into a culvert, where I could only fit up to my hip. I was hit on my thigh by a chunk of concrete, and I still have a knot there!”
The explosion blew out windows around San Antonio and as far as Floresville. But there was no wind and no nuclear material in the area. After the explosion, the three men were to be interviewed by the Post and Life Magazines; but, then, President Kennedy was assassinated in Dallas eight days later and all news about the explosion seemed to dissipate. In 2017, he told The Devine News that all three of the crew members were still alive.
Louis is the oldest living survivor at age 93. He graduated with the DHS Class of 1945.