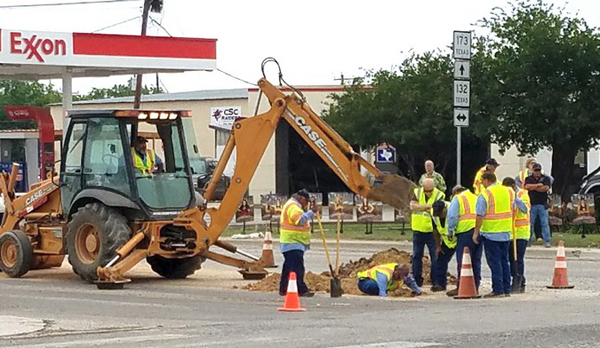 The verdict is still out on the source of a mystery water leak found under the road in downtown Devine a couple of weeks ago. Water samples were driven to San Antonio Tuesday, April 23 to try to verify if the leaking water is chlorinated or not, as Devine’s water lines are chlorinated. If it isn’t chlorinated that would help clear up if it was from a city water line, but would still not identify the source of the water. TXDOT would like to finish paving that section of the road but have expressed future concerns with the leak.
Sonar equipment was brought in by to help detect a water leak in the City of Devine on Monday, April 22, 2019 at the downtown 4 corners intersection. The intersection was closed Monday night in hopes of repairing the water leak and it’s source. Unfortunately despite working from all night from 7:00 p.m. to 5:00 a.m. a water leak was detected but there were no water lines, just gas lines in the area where the water was found. So the area was filled back in temporarily and calls were made.
The next day around noon city crews gathered to help with traffic control and then dug up a spot in the turn lane of Hwy. 173 to show the City’s Engineer and take water sample from. “They took a couple of water samples and our Director of Public Works Ismael Carrillo immediately drove them to the lab in San Antonio and asked them to put a rush on it as TXDOT is waiting to pave”, said City Administrator Dora Rodriguez, who was on site Monday night as well as Tuesday as they took the samples.

Public Works crews worked for an hour on Tuesday at 12 noon to get the heavy traffic area blocked off safe enough to dig. It only took them about 10 minutes to dig the hole and get the water samples and then another 10 to put base back in and fill up. Simon Davilla of Public Works used a backhoe to dig the top part and the others used shovels to help find the leak. City crews as well as the police department and the fire department helped Tuesday.
The turn lane dug up was the one between the Exxon and the Shell Stations, closest to the dip in the road.
Monday night the area was blocked off all the way to Windy Knoll and past the railroad road tracks. As well as from the bridge near Food King to the Hospice Building to divert traffic from the downtown area overnight. Many officers from the area departments helped out with traffic control setup.
American Leak Detection specialists were the ones called in to use their sonar equipment to find the mystery leak in the road Monday night.
“Crews worked all night Monday on the leak well up to 5:00 a.m. I stayed until about midnight. They found water flowing, but it would disapate in the Hwy 173/Hwy 132 turn lane. It was all long there, all directions, so we couldn’t figure out where it was coming from as there were no water lines just gas lines in the area”, said Rodriguez. “The liability concern is if it’s our city water line and taking care of it. Also a concern is that it could collapse at some point if it causes a cavern under the road in the future if it is not found.”
“The leak was a surprise to us. As was the four man holes that they found in the roadway that had been paved over at some point in the past. We refer to our City Engineer and had him help us figure it out as it wasn’t in our plans.”
The City of Devine sent out the following message Monday morning asking people to avoid the area as it would be closed overnight as they tried to correct the issue: “The City of Devine will be repairing a Water Leak in the area of the intersection of Teel Dr. (TX Hwy 132) and Hondo Ave. (TX Hwy 173). This repair will be occurring today, Monday, April 22, 2019, at 7:00 p.m. The City will be closing this area to all traffic while correcting this issue.
Please use an alternate route during this time. The City’s goal is to have the water leak resolved by 6:00 a.m.”
By K.K. Calame