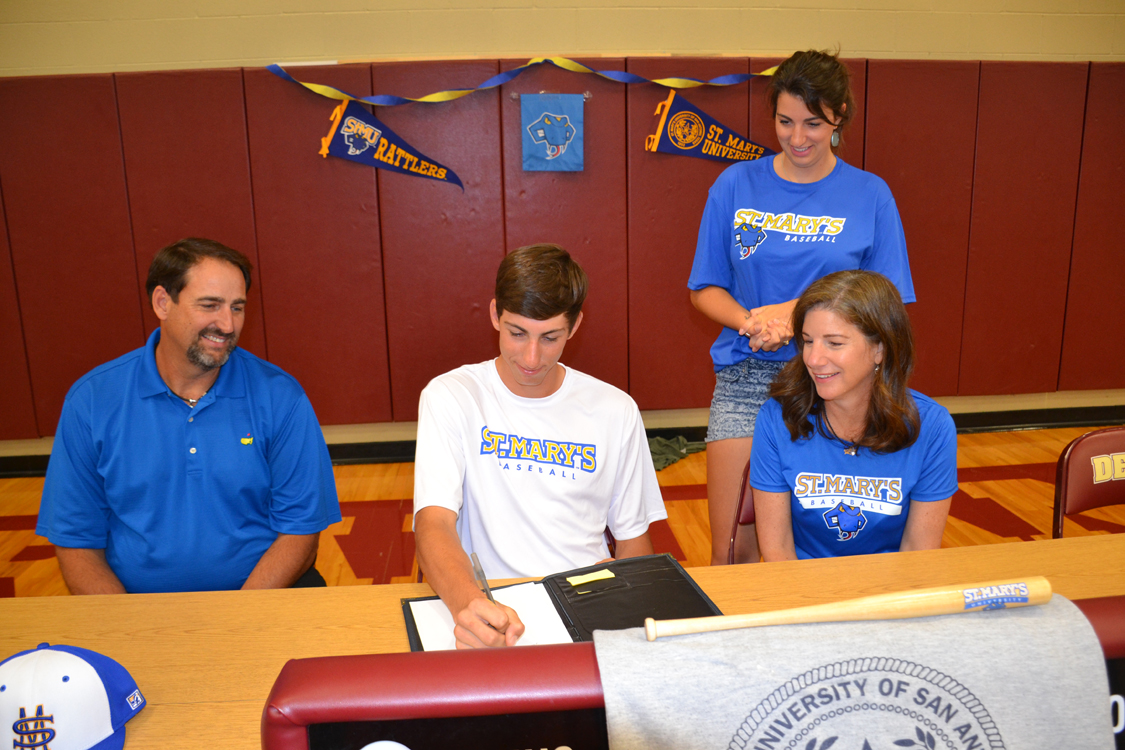 Recently graduated Warhorse baseball player Connor Schmidt signed a letter of intent to pitch for St. Mary’s University in San Antonio. The 6’6” (and still growing) right-hander is fresh off a 10-1 season including 3 playoff victories for the District Champion and Regional Quarterfinalist Devine Warhorse baseball team.
“I couldn’t be more proud for Connor and his family,” said Head Baseball Coach George Villa. “St. Mary’s will be a great place for him to continue to develop as a baseball player and a better person than he already is. Lucky for us, he’s a short drive away for us to be able to watch him play!”
Assistant Coach Heath Poppe had this to say, “Connor has worked very hard achieving his dream of playing at the next level. His attention to detail, willingness to learn, and his ability to adapt made him a successful pitcher for Devine Baseball program. His work ethic is second to none, and his passion for the game will be his driving force success at St. Mary’s. I could not be more proud of this young man.”
“It has been my privilege to see Connor develop into the outstanding baseball player and young man that he is today,” stated Assistant Coach Bart Oropeza. “As a result of his work ethic and tenacity, Connor earned an opportunity to play baseball at the next level which is a tremendous accomplishment. I have a feeling that he has many more baseball seasons in his future. Good luck, Connor!”
“I am very proud of Connor and am grateful for he has done for the Warhorse athletic programs,” stated Athletic Director Chad Quisenberry. “He’s been a great role model for our younger kids and has been an outstanding leader in our school. Connor will be missed, but I could not be more excited about what the future holds for him.”
As Connor trades in the Warhorse maroon for the Rattler blue, his goal is to be as good as the gold that compliments both jerseys. The Rattlers are coming off a 35-18 season that includes an 18-10 record in the Heartland Conference. St. Mary’s missed the championship game of the conference tournament by one game. Leading the program in his 32nd year is Head Coach Charlie Migl, who had this comment regarding Connor’s signing.
“We are very excited about the opportunity to work with an athlete the stature of Connor Schmidt. We believe that he has a high ceiling in terms of his overall baseball development. We are happy to have Connor join the Rattler family.”
Migl ranks fourth in all-time victories among NCAA D-II coaches, and is the second-winningest active coach with 1,145 career wins, all at St. Mary’s. Under Migl’s tutelage, St. Mary’s has 15 conference championships including six Heartland Conference championships. The Rattlers have also made two NCAA Regional Championships and have reached the NAIA World Series three times. The crowning moment in program history occurred in 2001 as they won the D2 National Championship.
It is no coincidence that two of the finer young men who have represented the Warhorse athletic programs so well in multiple sports over the last four years signed their letters of intent on the same day in the Devine Student Activity Center. Along with Connor, Steven “Bulldog” Ramirez signed his letter of intent to powerlift for Midland University in Nebraska shortly after Connor signed his name to pitch for St. Mary’s.
Connor will continue to represent the Warhorses as he pitches in the Texas High School Coaches Association All-Start Game in Round Rock at Dell Diamond on June 16 at 10:00am.
Devine’s faculty and staff along with all of Warhorse Nation wish Connor the best as he pursues his education and continues his athletic career 41 miles north. Best of luck, Connor, and thanks for your dedication to DHS and leaving a great Warhorse legacy behind.
Connor is the son of Gary and Pam Schmidt.
By Jerel Beaty
Staff Writer