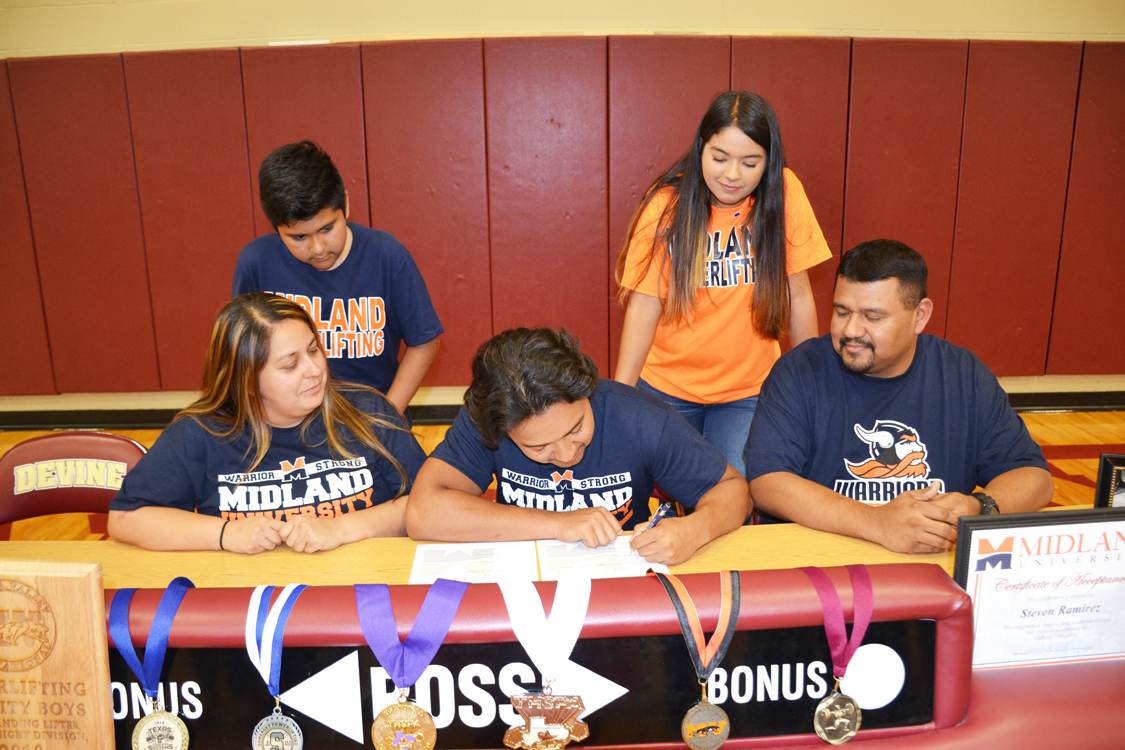 Midland University in Fremont, Nebraska is getting one heck of a young man in former Devine powerlifter Steven Ramirez, more commonly known as “Bulldog” throughout his time as a Warhorse. Bulldog parlayed his 165lb Class, Region 4-4A championship and second place State showing into a college scholarship, which not only allows him to continue his education but the opportunity to compete four more years at the next level.
“I am very excited for Steven,” stated Head Powerlifting Coach Paul Gomez. “Getting a scholarship for any sport is a great accomplishment in itself. Knowing the dedication and hard work that he had to get to this point, especially after his knee injury, to now move on and compete at a much bigger level is an awesome thing. It couldn’t have happened to a better young man.”
It is a great thing, indeed, when young men who carry themselves the right way by making good decisions for themselves, their family, and their teammates while responsibly representing their school are rewarded for doing what’s right. While Bulldog is reaping those rewards in a big way, for those of us who had the privilege to teach or coach him, it is an honor for all of us as well.
“Steven has always done things the right way and I am very proud of him,” continued Gomez. “It takes courage to continue your education out of state but sometimes it’s a blessing. Bulldog will be able to concentrate on his academics while meeting new friends and seeing new places. I think it will be great for Steven.”
“I am proud and am very grateful for what Bulldog has done for the Warhorse athletic programs,” stated Athletic Director Chad Quisenberry. “He’s been a great role model for our younger kids and has been an outstanding leader in our school. Bulldog will be missed, but I could not be more excited about what the future holds for him.”
Bulldog is leaping from a successful Warhorse powerlifting career onto a Midland Warriors powerlifting team who just won the USA Powerlifting Men’s Raw Collegiate National Championship in only its third year of existence. Leading the way is Head Coach Tim Anderson.
Before being named Midland University’s first powerlifting coach, he led the USA World Bench Press Team to 12 team awards at international events in a span of four years. According to MU’s athletic website, Anderson was responsible for competition strategy, team selection, and overseas travel and training for competitors as a coach for USA Powerlifting.
It is no coincidence that two of the finer young men who have represented the Warhorse athletic programs so well in multiple sports over the last four years signed their letters of intent on the same day in the Devine Student Activity Center. Along with Bulldog, Connor Schmidt signed his letter of intent to pitch for St. Mary’s University in San Antonio shortly before Bulldog signed his name to powerlift for Midland University.
Devine’s faculty and staff along with all of Warhorse Nation wish Bulldog the best as he pursues his education and continues his athletic career 982 miles north. Best of luck Bulldog, and thanks for your dedication to DHS and leaving a great Warhorse legacy behind.
Bulldog is the son of Santos and Maria Ramirez of Devine.
By Jerel Beaty
Staff Writer