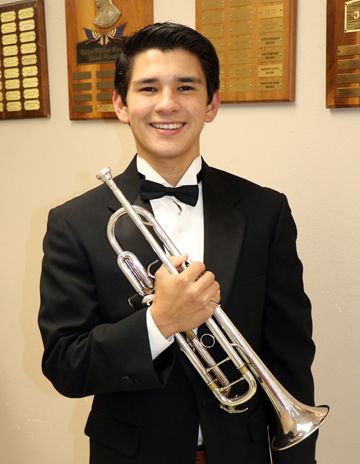 On Saturday several hundred students from (5) Regions converged at Alice High School for the Area ATSSB Auditions for a chair in the Texas 4A All-State Symphonic Band. These students had all qualified through their Region Auditions where only the top few proceed to the Area level. Our Area encompasses the entire southern portion of Texas!
For the third straight year Brian Schaefer as a senior trumpet player from our DHS Band has earned a chair in the All-State 4A Band!! Earning a chair in the All-State Band is a huge honor, but accomplishing this for (3) consecutive years is absolutely OUTSTANDING!!
Brian is no stranger to the audition process in All-Region, Area, and State. He has earned a chair in the All-Region Band every year since the seventh grade at DMS! He has also earned the distinction of being 1st chair Trumpet more than once, including the highest level as 1st Chair Trumpet in the 2021 4A All-State Band last spring!

He will be rehearsing with the band all throughout the annual TMEA Convention in San Antonio from February 9th-12th. The 4A All-State Band will perform at 9:30 am on Saturday at the Convention Center in the Lila Cockrell Theater.
Brian is a very successful well-rounded student at DHS with other interests including golf and tennis. He has also been consistently at the top of his academic class. We are very proud of Brian’s achievements and contributions to the Devine High School Band!
Brian is the son of Veronica and Brian Schaefer.
He is under the direction of Jeff W. Miller, BME, MM, Director of Bands, Devine ISD and Assistant Directors Tom Settles and James Quintero.