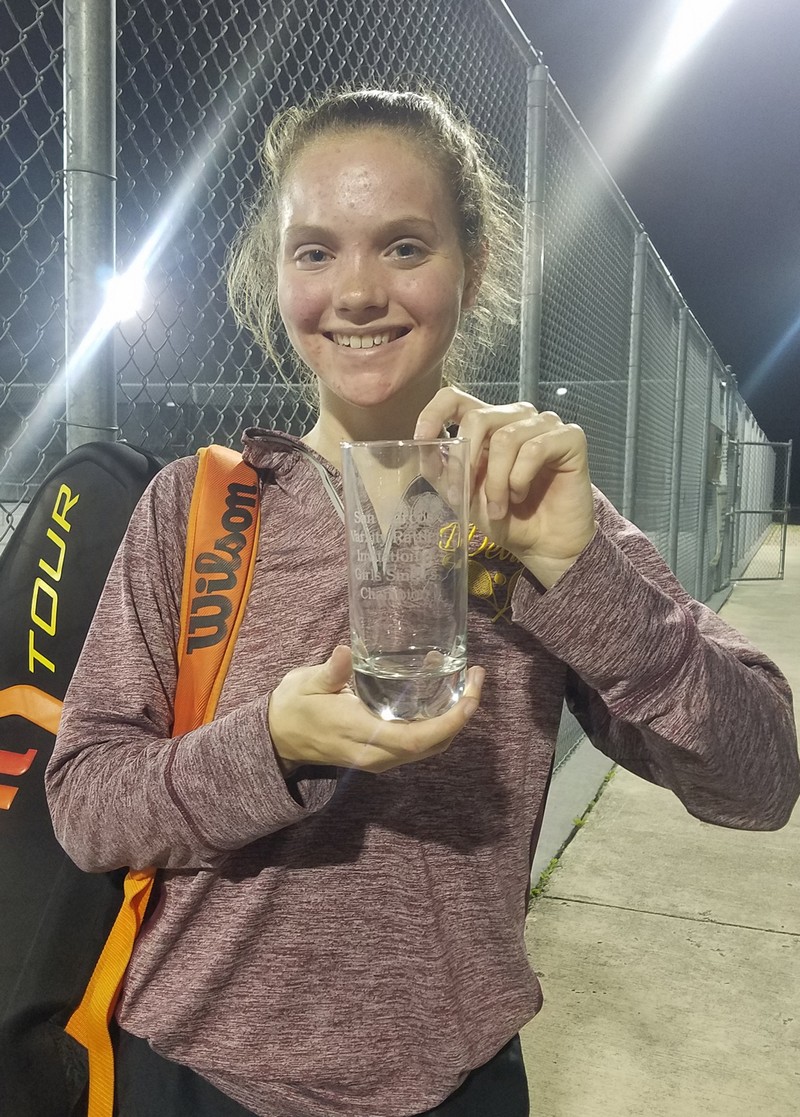 Devine Tennis Team competed very well in the very competitive San Marcos Tournament. There were 16 teams from all around Texas like Pasedena Dobie, LBJ Austin, LBJ Laredo, Eagle Pass, Stoney Point (Austin), Victoria, Liberty Hill and Wharton just to name a few. Players got plenty of court time and invaluable experience since they were guaranteed five matches. Turns out the weather conditions prompted the tournament director to finish in one day. Therefore, the kids had a very long, exhausting day on Friday.
1st Place Girls Singles – Brooke Runyan beat girls from Liberty Hill, Pasedena Dobie and Uvalde, to get to the semi-finals. Brooke beat Sami Maddox from Clemens HS in 2 sets, 7-6 (7-2) 6-4. In the finals, Brooke beat Reagan Chester, Clemens #1 girl 6-0, 6-1. Brooke had a great tournament finishing 1st out of 32 girls.
Bella Elias had a tough draw, losing to Liberty Hill’s #1 girl. She was placed in the “B” Bracket where she beat Judson, San Marcos and Uvalde. Bella played in the finals of the “B”, but lost to Liberty Hill. Bella go 16th place out of 32 girls.
7th Place – Jake Harrell. Jake won his first two matches against Austin LBJ and Pasedena Dobie. Then he lost to Uvalde. Jake finished out his bracket winning the next two matches earning 7th place out of 32 boys. Jake played very well in an extremely tough draw.
Aidan Hildenbrand had a tough draw as well, losing his first few matches. He continues to grow and improve every week. Looking forward to seeing what he will accomplish the next couple of years.
9th place – Girls Doubles teams met up with some stiff competition. Malvin Flores/Laurel Spannagel beat Lockhart, then lost to the tournament champ, Austin LBJ. The duo beat Clemens, Judson, and Eagle Pass to win 9th place. These girls have become stronger with every match they’ve played. #2 doubles team, Amy Bailey/Cameron English won their 1st match , then lost to Uvalde, and La Vernia. They placed 15th.
Boys Doubles – Mason Zenon/Caeden Alvarez lost their first match, putting them in the “B” bracket. They won the rest of the matches.
Jacob Barron/Denton Zuercher lost their 1st match to Wharton, also putting them in the “B” bracket. They beat Austin LBJ and Clemens, then lost their last match.
Mixed Doubles teams had a great tournament. Toby Ramos/Preslee Quisenberry won their 1st match against San Marcos, but lost a tough one in a tie-breaker to LBJ Laredo, they finished the bracket out, beating Liberty Hill, Pasedena Dobie, and Uvalde to win 9th place out of 32 teams.
4th place – Ralph Rios/Scarlett won their 1st three matches against San Marcos, Clemens HS #2, and LaVernia. In the semi-finals, they lost to Liberty Hill. They lost a close one against Clemens #1 team and got 4th place out of 32 teams.
“This tournament gave us so much great experience. The team played hard and battled through every match. They got to play kids from all over Texas and realized they can compete!!! I got so many compliments from other coaches on their performance and behavior. It’s always a proud moment for a coach.”
“I would like to thank Coach Quisenberry, Coach Sanders and all the parents that helped out this weekend. This tournament is spread out over 6 different sites. There is no way I would have been able to handle this by myself. Thank you, thank you parents for your time and support this weekend and throughout the season. You are the greatest!!!” Coach Sostarich