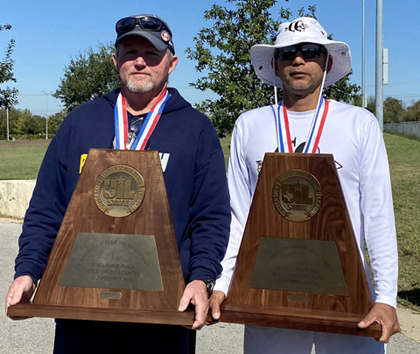 With almost two weeks now to reflect on what an exceptional season BOTH Lytle Cross Country teams had in 2021, Head Coach Gilbert Ruiz and assistant Hadley Foster are rightly proud of the work put in by their athletes not only this season but in previous years that led to what many from the Lytle community got to experience in Round Rock at the State Meet.
Pirates
According to Ruiz, the Pirates began the year with high expectations as the team was ranked 6th in state. Only able to run a complete team in three of the eight invitationals due to injury and health concerns, the Pirates reeled off a District Championship in Poth, followed by a silver-medal finish at Regional in Corpus Christi, and finally, their epic third place finish at State.
The District Championship is nothing new for the Pirates as they won their fourth consecutive title dating back to the 2018 season, and is their 12th overall since 2003.
This season marked the fourth consecutive trip to Old Settlers Park for the Pirates as they also advanced in 2018, 2019, and 2020 where they finished third, sixth, and fourth respectively.
This Pirate team included Jose Cortez, Robert Wagner, Israel Andrade, Abel Sanchez, Brandon Obando, Jared Aguinaga, and Johnny Rey Alvarez.
Lady Pirates
The Lady Pirates began the season with less spotlight shined on them than their Pirate counterparts as the Lady Pirates were not ranked as the 2021 season was getting underway.
This special group of young ladies proceeded to capture a District Championship and a Region 4-3A Championship that gave them the golden opportunity to compete as a team at State.
Overall, the Lady Pirates captured their second consecutive district championship, and their fifth as a program as they also were the top team in 2003, 2007, 2013, and 2018.
The Regional Championship was the first for the Lady Pirates in school history, and it was the first time an entire team participated at the State level.
This amazing season had the Lady Pirates from going overlooked and unranked to a 4th place finish at State. Expectations are expected to be sky-high next season as everyone is coming back in 2022.
This Lady Pirate team included Eisabel Guerrero, Marissa Lopez, Samantha Mujica, Moriah Gomez, Jadyn Boroquez, Natalie Williams, and Dezmarie Ortega.
Thank you, Lytle!
Coach Ruiz gave Coach Foster the pleasure of sending out their final heartfelt message to Lytle community members who supported their endeavors during the course of this memorable season.
“So many people to thank for the support they gave these great athletes. First a huge thank you to our school board members who support Lytle education and athletics with great support.
A big thanks to Coach Lori Wilson and Ada Tapia for organizing the sendoff and goodie bags for the runners. Thank you to all the principals who lined up their students to walk through your campuses during instruction time. To Mayor Gonzales for lining up city support with the escorts around the city. It took us one hour to leave Lytle once we boarded the bus. Armando and all the maintenance support for getting us around this great state of Texas to showcase Lytle Cross Country. We hope we got the bus windows clean, although the girls need lessons on decorating windows but it was their first try. Next year we will have another chance.
At the finish line of the state meet, all those who previously ran and medaled for Lytle returned. The Godfather, Jeremy Juarez, came to bless our performance. Carlos Tamayo and Joshua Montes along with Sebastian Benevides who was part of the 2009 third place team. The runners from last year, although wishing they had finished third instead of fourth, were in attendance also. As we were leaving Lytle one of the athletes asked if we got stipends for making the state race. We laughed. Coach Ruiz relates the experience of the first state meet with Jeremy Juarez in 2006. Jeremy placed 5th and medaled. Coach Ruiz relates how much joy he got from seeing all Jeremy’s family and friends celebrate his accomplishments. He knew then that he wanted to bring that joy of victory to as many athletes as he could. This is the stipend that we get.
Finally a word on the heartbeat of the program, Coach Ruiz. This is probably Coach Ruiz’s best year coaching the team. He has had to balance time between the ladies and lads and try not to show preference to either team. Girls often require a kinder, gentler approach to becoming better. The kinder, gentler approach is not what we do well as coaches. When the girls were winning meets and improving weekly, the boys never ran as a complete team until the regional meet.
Coach Ruiz managed the boys by holding them back even though they wanted to run. We knew really only three meets mattered, the district race, the regional race and the state race. Even when we ran the regional race we ran in control. Each runner had a person to race near. We placed second at the Regional race and then as we had two weeks to get better we turned them loose on their final race.
We finished third putting Brownsville IDEA the Regional champion to fourth. We will rejoice in the successes of this year for now. We know that others will have to step up for the Lytle legacy to continue but as long as the heartbeat continues we will be around.”
By Jerel Beaty
Staff Writer