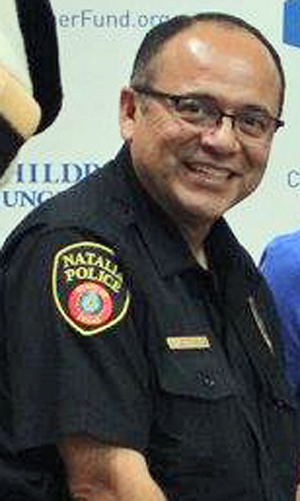 Natalia Police Chief Gilbert Rodriguez has resigned his position with the City of Natalia to take a job with Medina County, though he will remain in his current role until October 7.

“I was offered the Chief Deputy position for Sheriff Brown and I am looking forward to serving the citizens of Medina County,” Rodriguez said.
The Natalia City Council unanimously accepted Rodriguez’s resignation during a Special meeting held Monday, September 9, at 1:30 pm.
Council entered into Executive Session at 1:36 pm, and reconvened in Open Session at 2:00 pm.
A Selica Vera-Darin Frazier motion declining to appoint an Interim police chief passed 4-0 with the support of fellow Council members Mike Fernandez and Sam Bluemel.
A Fernandez-Bluemel motion to advertise for the position of police chief until Wednesday, Sept. 25 also passed unanimously.
Councilman Sam Smith was absent.
Rodriguez has served as police chief in Natalia since 2013, and formerly served as Medina County sheriff.
“It’s been an honor and a privilege to serve the citizens of Natalia,” Rodriguez said. “I had this opportunity come knocking on my door, and I’m excited to enter the next chapter of my life.”
By Marly Davis
Staff Writer